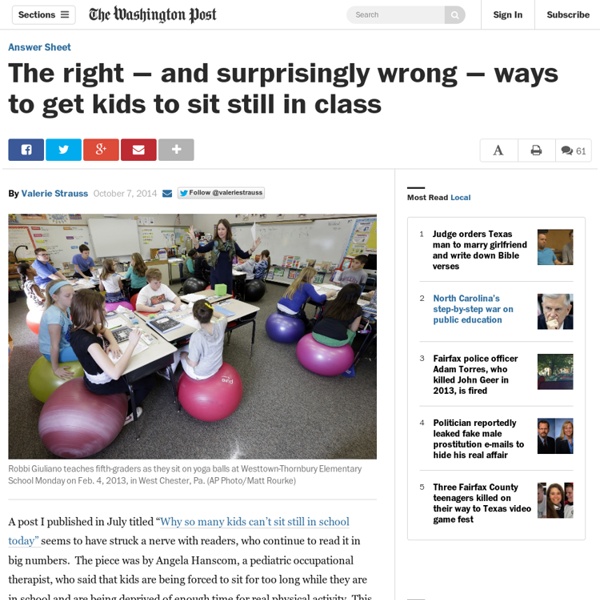 Robbi Giuliano teaches fifth-graders as they sit on yoga balls at Westtown-Thornbury Elementary School Monday on Feb. 4, 2013, in West Chester, Pa. (AP Photo/Matt Rourke) A post I published in July titled “Why so many kids can’t sit still in school today” seems to have struck a nerve with readers, who continue to read it in big numbers. The piece was by Angela Hanscom, a pediatric occupational therapist, who said that kids are being forced to sit for too long while they are in school and are being deprived of enough time for real physical activity. This, she said, is affecting their ability to learn and in some cases leading to improper ADHD diagnoses. Here is a follow-up post by Hanscom in which she talks about how to get kids moving in class and some of the mistakes teachers are making. By Angela Hanscom My last post, “Why so many kids can’t sit still in school today,” has and continues to generate tremendous feedback from around the world. However, when do we draw the line?

City ends reserved soccer at Mission Playground after Dropbox flap The San Francisco Recreation and Park Department has decided to end reserved adult play at Mission Playground — the site of a video-recorded confrontation between tech workers and locals that went viral — after meeting with a group of neighborhood kids on Wednesday, according to department director Phil Ginsburg. Ginsburg said park officials met with a combination of kids and youth soccer advocates and came to the conclusion that, in this instance, the need for unstructured play on weekday evenings outweighed the desire to accommodate adults. “The most compelling suggestions came from the kids who said, ‘This is a safe place we can come and play and we feel like we need more time,’” said Ginsburg. “Our first priority is kids. We are always striving to balance different types of play.”

How to Make Your Life Miserable Learning Languages Today I am graciously presenting you with 7 ways through which you can make your life miserable learning languages. The best thing is that you don’t need to follow all 7 pieces of advice to begin hating learning languages, usually only 1 or 2 will suffice. 1.

4 Big Things Transformational Teachers Do The key to transformational teaching is not reacting, but rather a grinding obsession with analysis and preparation. Lee Shulman, as reported by Marge Scherer, suggests that expert teachers -- despite enormous challenges --demonstrate: Cognitive understanding of how students learn; emotional preparation to relate to many students whose varied needs are not always evident; content knowledge from which to draw different ways to present a concept; and, finally, the ability to make teaching decisions quickly and act on them.

Having a ball in the classroom Students in Robbi Giuliano's fifth-grade class sit on yoga balls as they complete their assignments at Westtown-Thornbury Elementary School in West Chester, Pa. (MATT ROURKE/ASSOCIATED PRESS) By — Kathy Matheson, Associated Press March 12, 2013 You are not useless, but the society that tells you so is I think what makes me the most sad to read on my Facebook feed is not the stories about how corrupt and useless politicians and corporations are. I already know that, most people know that. But to see how cruel and heartless ordinary people can be in the comment fields underneath these stories is depressing. Our society, this system, is breaking down at record speed. The Literary United States: A Map of the Best Book for Every State Two weeks ago, we published a literary map of Brooklyn, highlighting the books we felt best represented the neighborhoods in which they were set. Compiling the list of books for that map had us thinking about what it means for a story to not just be from a place, but also of it, and why it is that some places have an abundance of literary riches (we’re looking at you, American South), while others, well, don’t. And we had seen other maps pairing books with states, but those maps tend to signify the fame level of the books rather than their literary merit; they also tend to be dominated by white men, most of them dead. And Margaret Mitchell. We wanted to do better.

Sahlberg: Why Finland's schools are top-notch Education in the United States is too much defined by testing and data, says Pasi Sahlberg. Many American parents worry about their kids getting good grades and doing well in school Pasi Sahlberg: Finland has one of the leading education systems in the worldHe says U.S. can learn from Finland in building an education system that enhances equity Sahlberg: U.S. education focuses on testing and data, which skews teaching priorities Editor's note: Pasi Sahlberg is visiting professor at Harvard University's Graduate School of Education and former director general in the Finnish Ministry of Education and Culture.

New Teachers: Designing Learning Environments The Importance of Classroom Design Why does the physical design of classrooms matter? Mark Phillips discusses this question in "A Place for Learning: The Physical Environment of Classrooms" and offers examples of and resources for turning impersonal spaces into student-friendly havens of learning.

Why so many kids can’t sit still in school today The Centers for Disease Control tells us that in recent years there has been a jump in the percentage of young people diagnosed with Attention Deficit and Hyperactivity Disorder, commonly known as ADHD: 7.8 percent in 2003 to 9.5 percent in 2007 and to 11 percent in 2011. The reasons for the rise are multiple, and include changes in diagnostic criteria, medication treatment and more awareness of the condition. In the following post, Angela Hanscom, a pediatric occupational therapist and the founder of TimberNook, a nature-based development program designed to foster creativity and independent play outdoors in New England, suggests yet another reason more children are being diagnosed with ADHD, whether or not they really have it: the amount of time kids are forced to sit while they are in school. This appeared on the TimberNook blog. State-based Prevalence Data of ADHD Diagnosis (2011-2012): Children CURRENTLY diagnosed with ADHD (Centers for Disease Control)