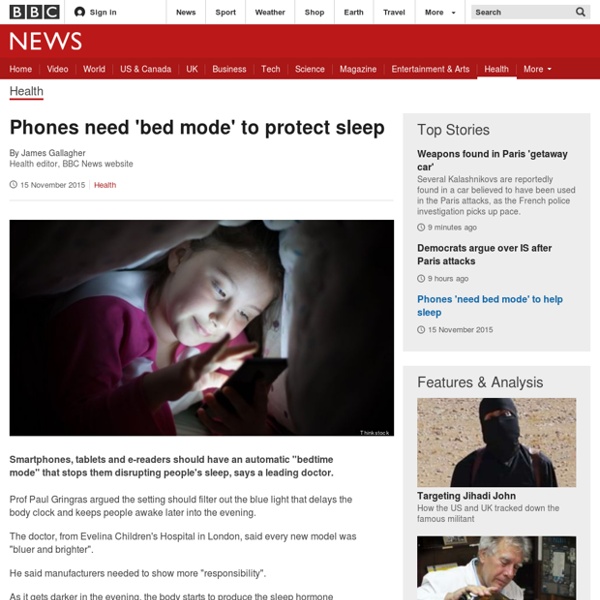 Image copyright Thinkstock Smartphones, tablets and e-readers should have an automatic "bedtime mode" that stops them disrupting people's sleep, says a leading doctor. Prof Paul Gringras argued the setting should filter out the blue light that delays the body clock and keeps people awake later into the evening. The doctor, from Evelina Children's Hospital in London, said every new model was "bluer and brighter". He said manufacturers needed to show more "responsibility". As it gets darker in the evening, the body starts to produce the sleep hormone melatonin - which helps people nod off. Certain wavelengths of light, those at the blue-green end of the spectrum, can disrupt the system. Prof Gringras was part of a study, published in Frontiers in Public Health, analysing the light emitted by devices. It concluded there was a clear trend for new devices to be bigger, brighter, have higher levels of contrast and emit more blue light.

Half of all tree species in Amazon 'face extinction' Image copyright William Milliken-RBG Kew More than half of all tree species in the Amazon face extinction, warn international scientists. According to new data, up to 57% of all Amazonian trees may already fit the criteria of being globally threatened. If confirmed, the estimates would raise the number of threatened plant species on Earth by almost a quarter. Forest cover in the Amazon has been shrinking for decades, but little is known about the impact on individual plant species. The trees at risk include iconic species like the Brazil nut tree, food crops such as cacao, the source of chocolate, as well as rare trees that are almost unknown to science.

Nano-scale 'fingerprint' could boost security Image copyright Lancaster University An atomic-scale fingerprint could boost the security of connected devices, according to British scientists who have developed it. The tiny identity tags are essentially tiny imperfections in the building blocks of matter, making them virtually impossible to clone. They could be used as the basis of a robust system for authenticating hardware and software,

Teaching about Paris and ISIS on Monday  A number of teachers I work with contacted me for recommendations about how to address the attacks in Paris and conflict with ISIS in class on Monday. I have no easy answers about the events in Paris or a solution to the problems in the Middle East. I don't think any one does. Democratic Party presidential candidates discussed what happened at their debate on Saturday. Knock Out Cancer With an Interactive Punching Bag The Interactive Punching Bag helps you knock cancer cells out of the ring and raise funds in the process In life, we are told to pick our battles. But when the fight is about cancer, it’s a battle you can’t resist being a part of. Thijs Biersteker, a Dutch designer brings the fight to the ring with the Interactive Punching Bag to help Fight Cancer, a fundraiser hosting group, to raise research funds for the Dutch Cancer Society. When it comes to fighting cancer, it is easy to band people with a common cause—taking down cancer once and for all. But since there’s still no foolproof way to cure it, you can find satisfaction in boxing the heck out of these unforgiving cancer cells with the Interactive Punching Bag.

Facebook makes you stressed and miserable, study shows Considering it was built to bring people together, social media has been getting a lot of shit recently. It's been accused of spying on us, promoting jealousy, and even destroying our self-esteem – in fact, only last week, model Essena O'Neill tearfully shut down all her accounts after making the very same claims. But is any of this flack really justified? Well, quite possibly yes. 20 Furniture Marvels For The Futuristic Home Design will keep changing to suit the most current of trends, tastes and functionality needs of today’s buyers. The same can be evidently seen in mobile phones, PC keyboards, gaming consoles and even in mugs. These creative means to re-invent product designs as we know it are not lost in another important aspect of our daily life: home furniture. Granted some designs will look cooler and more comfortable than others, but pay extra attention to futuristic designs. This is why I’d like to highlight some futuristic designs in furniture that could possible grace our homes in the not-so-distant future. For some lucky home and office owners, the future is already here.

White Americans long for the 1950s, when they didn’t face so much discrimination President-elect Barack Obama is welcomed by President George W. Bush for a meeting at the White House in Washington on Jan. 7, 2009, with former presidents George H.W. Bush, Bill Clinton and Jimmy Carter. (J. Man fitted with robotic hand wired directly into his brain can 'feel' again A new advanced robotic hand that is wired directly into the brain has been successfully tested, allowing paralysed man to “feel”. The hand, developed by the Applied Physics Laboratory at Johns Hopkins university, is part of a research project into advanced replacement limbs funded by the US military’s Defense Advanced Research Projects Agency (Darpa). The 28-year-old man, who has been paralysed for more than a decade after a spinal-cord injury, had electrodes from the prosthetic hand inserted into his sensory and motor cortexes. This allowed him to both control the hand with thought and sense when the fingers of the hand were touched individually.

Google Effect: is technology making us stupid? - Features - Gadgets and Tech "Is the internet making us stupid?" I type. Press enter. Almost instantly, a raft of answers and articles on screen. It's an unsettling feeling that my first instinct – to Google my own stupidity – may be the root of my increasing daftness. A recent study (you've probably forgotten it by now) suggests 90 per cent of us are suffering from digital amnesia.

Plugged-In Over Preppy: Teenagers Favor Tech Over Clothes Photo For some teenagers, wearing last season’s jeans will always be unthinkable. But a growing number consider texting on a dated smartphone even worse. A Guide to White Privilege For White People Who Think They've Never Had Any  I can relate to you. You are usually the white person who grew up poor, often living a marginalized existence, who overcame economic barriers to achieve a modicum of success as an adult. Sometimes, you knew a lot of other Black or Latino poor people and you compare yourself and your outcomes to theirs.