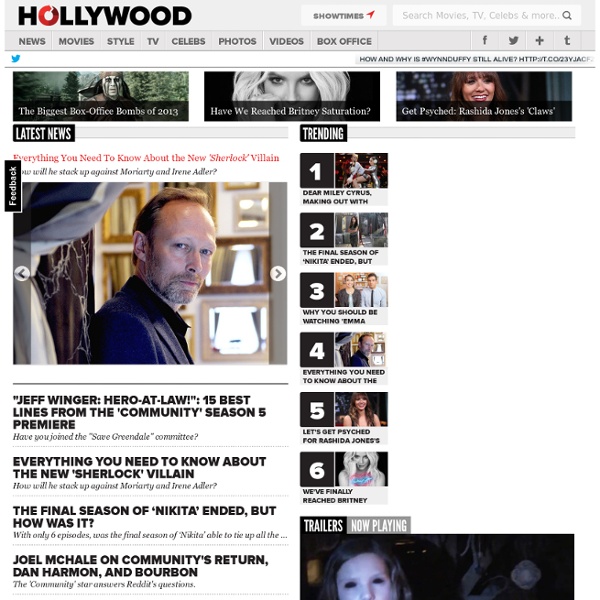 The Biggest Box-Office Bombs of 2013 Have We Reached Britney Saturation? Get Psyched: Rashida Jones's 'Claws' Latest News Everything You Need To Know About the New 'Sherlock' Villain How will he stack up against Moriarty and Irene Adler?

50 Amazing Movie Facts! 2. Samuel L. Jackson politely requests that anyone who claims not to enjoy watching themselves in movies to please stop lying. 3. Francis McDormand and Joel Coen have been married since 1984, the year of the Coen Brothers' debut film, Blood Simple. McSweeney's Internet Tendency: Nietzsche's Angel Food Cake. 1. Allow the angel to reach room temperature. Then kill it. 2. The Art of Practical Effects As noted by my other entries, I am biased towards natural cinematography shot on motion picture film. If it’s shot through a lens onto celluloid, count me in! Recently, I have been thinking about a list of films with flawless execution of “special” effects. By “special,” I mean true to life, in camera, photographic effects. This excludes computer generated imagery of course.

Top 50 movie special effects shots CRITERIA FOR THIS LIST:This is not a list of 'iconic' SFX shots, such as the opening shot in Star Wars or the final shot in Back To The Future, etc. There are many fantastic SFX shots in cinema history that are artistically 'awesome' without qualifying here. For the purposes of this list, a shot has to be either a) exceptionally convincing, b) ground-breaking or c) an exemplary execution of an oft-used technique. Only one shot is allowed per film. Capitalism and Cows TRADITIONAL CAPITALISM -- You have two cows. You sell one and buy a bull. Your herd multiplies, and the economy grows. Great practical effects films I'll always applaud the old school effects, if only for the immense work in just getting one ship to light up. Take this shot. It looks pretty straight forwards, ship in front of background moving around. But due to the nature of film is where things get tricky. If you were to just light the ship then shoot it would appear flat with and washed out as every element has different exposure rates. To capture this correctly you have to film multiple passes for each different layer of lighting intensity; one for the windows, the running light, the dish and then the ambient and key lighting.

Politics Explained FEUDALISM: You have two cows. Your lord takes some of the milk. PURE SOCIALISM: You have two cows. Does The Dog Die? #TubeClash - The Movie There are "wookies" in the movie that look little like the ones in Star Wars, but are more like cute little fuzzballs. One of them is killed by a character by being cut in half, being mistaken for a monster. It however comes back to life as a zombie and appears as such for the rest of the movie and its sequels. So despite being killed, it is undead for most of its on-screen time and still has its consciousness. There are also other zombie wookies, but we don't see them die. 10 Cloverfield Lane Two dead pigs, named Frank and Mildred, are seen briefly (they are never shown alive).