Orginal Lyrics - Here comes the sun - 1969. John & Paul singing. Barefoot. Big Mal. In the cab. Bass and sunglasses. Paul plays the guitar. Paul and George. Paul and Ringo. End of the day ? John Lennon. Untitled. Ringo on drums. Tunin... John sitting with his guitar. John and George. Lennon demoing Because. Sigh. Here comes the sun. George and Ringo. Singing. Leaving the studio. Get off the road. He's got a joke. Humm. Hummmm.

They didn't want to go back. Final. Back to studio ? A pause. Big picture. Detail. John & Paul. John & Paul 2. Before crossing look at... Shooting time. Tired ? Four guys at the door. George. Something to say. Who's first. Playing or not. Neighbours. Leaving studio. Empty. Jam. Back to studio 2. Leaving... Back again. Miscellaneous. A Postcard From John Lennon. A Postcard From John Lennon On July 1, 1969, John, Yoko, Julian and Yoko's daughter Kyoko were motoring around northern Scotland on holiday. 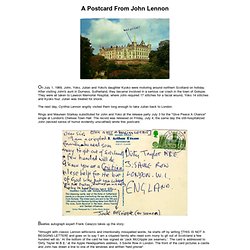 After visiting John's aunt in Durness, Sutherland, they became involved in a serious car crash in the town of Golspie. They were all taken to Lawson Memorial Hospital, where John required 17 stitches for a facial wound, Yoko 14 stitches and Kyoko four. Julian was treated for shock. The next day, Cynthia Lennon angrily visited them long enough to take Julian back to London. Ringo and Maureen Starkey substituted for John and Yoko at the release party July 3 for the "Give Peace A Chance" single at London's Chelsea Town Hall.

Beatles autograph expert Frank Caiazzo takes up the story: "Wrought with classic Lennon witticisms and intentionally misspelled words, he starts off by writing '[THIS IS NOT A BEGGING LETTER]' and goes on to say 'I am a crippled family who need som mony to git out of Scotcland a few hundred will do.' Jy20. Jy30. Jy40. Jy50. 130.jpg30. The Ballad of Beatles & Yoko Photo Session. The Ballad of Beatles and Yoko John and Paul spent April 14, 1969 recording The Ballad of John and Yoko. During one of the days shortly thereafter, the Beatles and Yoko gathered for a quick photo session to promote the single's release. The location for the session, with Linda McCartney as photographer, was the garden at Paul's Cavendish Road home. The Ballad of John and Yoko was issued as a single, backed with George's Old Brown Shoe, on May 30th 1969 in the UK and June 4th 1969 in the USA.

The American release came in a picture sleeve featuring two pictures from this photo session. Paul seems to have favored yellow socks during this period. Norwegian Wood The Abbey Road photopage. For many years, a zebra crossing in St. 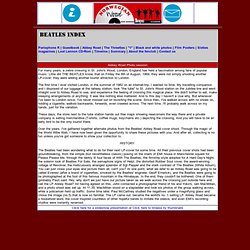 John's Wood, London, England has held a fascination among fans of popular music. Little did THE BEATLES know, that on Friday the 8th of August, 1969, they were not simply shooting another LP-cover; they were adding another tourist attraction to London. The first time I ever visited London, in the summer of 1982 on an interrail-trip, I wasted no time. My travelling companion and I disposed of our luggage at the railway station, took "the tube" to St. John's Wood station on the Jubilee line and went straight over to Abbey Road to see, and experience the feeling of crossing this magical place. These days, the store next to the tube station hands out free maps showing newcomers the way there and a private company is selling merchandise (T-shirts, coffee mugs, keychains etc.) depicting the crossing. 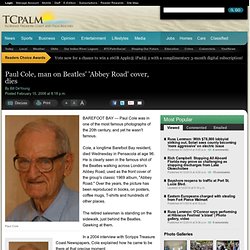 That's Paul Cole, visible behind John Lennon as the Beatles walk across the famous London street. BAREFOOT BAY — Paul Cole was in one of the most famous photographs of the 20th century, and yet he wasn't famous. Cole, a longtime Barefoot Bay resident, died Wednesday in Pensacola at age 96.