Latest Updates on Middle East Protests. Algeria shuts down internet and Facebook as protest mounts. Egypt protests: Police use Facebook and Twitter to track down protesters. By Ian Gallagher Updated: 04:16 GMT, 6 February 2011 Sitting on an upturned bread basket with her knees pulled up to her chest, a petite young woman looked out over Tahrir Square early yesterday morning and weighed up whether she should stay or leave. 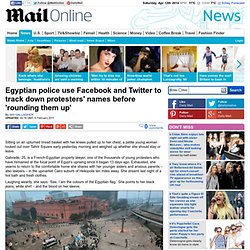 Gabrielle, 25, is a French-Egyptian property lawyer, one of the thousands of young protesters who have remained at the focal point of Egypt’s uprising since it began 13 days ago. Exhausted, she yearns to return to the comfortable home she shares with her younger sisters and anxious parents – also lawyers – in the upmarket Cairo suburb of Heliopolis ten miles away. She dreamt last night of a hot bath and fresh clothes. Laughing wearily, she says: ‘See, I am the colours of the Egyptian flag.’ War zone: But protesters say they now feel safer in Cairo's Tahrir Square than on the many streets where pro-government militia roam free ‘It’s not mine,’ she says, almost apologetically.

‘I am also worried about being arrested if I leave. Updates on Day 11 of Egypt Protests. As the political impasse in Egypt continues, a number of prominent Egyptians have called for President Hosni Mubarak to step down, to open the way for negotiations on a transitional government that can run the country until new elections. 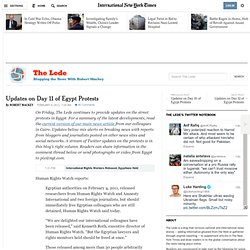 Ahmed Zewail, a Nobel Prize-winning chemist who left Egypt for the United States in the 1970s and is President Obama’s special envoy for science to the Middle East, sketched out a path to resolving the crisis in an Op-Ed article published in Wednesday’s International Herald Tribune. Mr. Zewail, who arrived in Cairo the same day to meet with members of the opposition and the government, wrote: “In order for this plan to succeed, President Hosni Mubarak must step down now.”

As Bloomberg News reported on Thursday, Dr. Zewail has won the backing of the April 6 Youth, a group of Internet activists who helped to mobilize the protests. 1. Egypt's Internet Crackdown 'Had US Help' - Defense/Middle East - Israel News. A California-based company helped Egypt surreptitiously inspect internet messaging by protesters since the beginning of the uprising in Cairo and other cities, according to an advocacy group. 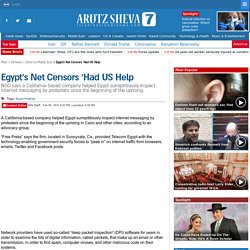 “Free Press” says the firm, located in Sunnyvale, Ca., provided Telecom Egypt with the technology enabling government security forces to “peek in” on internet traffic from browsers, emails, Twitter and Facebook posts. Network providers have used so-called “deep packet inspection” (DPI) software for years in order to examine the bits of digital information, called packets, that make up an email or other transmission, in order to find spam, computer viruses, and other malicious code on their systems. “Anything that comes through (an Internet protocol network), we can record.

Free Press claims the Egyptian government's alleged use of such technology to read messages and even track cellphone users via GPS coordinates and SMS messaging was an infraction of the protesters' human rights. Gerdab.ir. Digital revolutionaries: What’s your Plan B?  Digital Media and Iran's Green Movement: A Look Back with Cameran Ashraf. By: Dan Verderosa, Posted: Dec 15 09 Regions: Iran Issues: Elections, Freedom of opinion & expression December 7 was Student Day in Iran, a day when students traditionally commemorate the deaths of three Iranian students who were protesting the Shah in 1953. 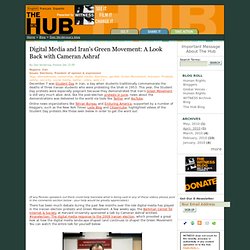 This year, the Student Day protests were especially poignant because they demonstrated that Iran's Green Movement is still very much alive. And, like the post-election protests in June, news about the demonstrations was delivered to the world via tools like Twitter and YouTube. Online news organizations like Tehran Bureau and Enduring America, supported by a number of bloggers, such as the New York Times' Lede Blog and Citizentube, highlighted videos of the Student Day protests like those seen below in order to get the word out: (If any Persian speakers out there could help translate what is being said in any of these videos please post in the comments section below - your help would be greatly appreciated.)