Using the uncertainty principle against itself to gain precision. Accurate measurement underlies a huge amount of modern technology. 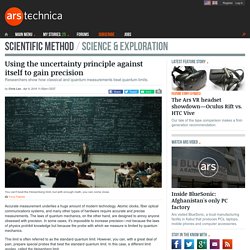 Atomic clocks, fiber optical communications systems, and many other types of hardware require accurate and precise measurements. The laws of quantum mechanics, on the other hand, are designed to annoy anyone obsessed with precision. In some cases, it's impossible to increase precision—not because the laws of physics prohibit knowledge but because the probe with which we measure is limited by quantum mechanics. This limit is often referred to as the standard quantum limit. However, you can, with a great deal of pain, prepare special probes that beat the standard quantum limit. You can't beat the Heisenberg limit. All your limits are standard As usual, before we get to the cool stuff, we have to deal with some background—otherwise known as "older cool stuff. " But lasers also have some limits. What does this all mean? These small quantum fluctuations all average to the perfect value, though. Icists aim to make transition to quantum world visible.

Theoretical physicist Frank Wilhelm-Mauch and his research team at Saarland University have developed a mathematical model for a type of microscopic test lab that could provide new and deeper insight into the world of quantum particles. 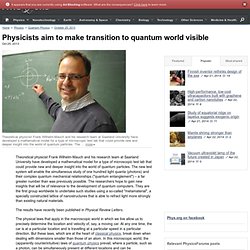 The new test system will enable the simultaneous study of one hundred light quanta (photons) and their complex quantum mechanical relationships ("quantum entanglement") – a far greater number than was previously possible. The researchers hope to gain new insights that will be of relevance to the development of quantum computers. They are the first group worldwide to undertake such studies using a so-called "metamaterial", a specially constructed lattice of nanostructures that is able to refract light more strongly than existing natural materials. The results have recently been published in Physical Review Letters. Amazingly, Actual Molecules Look Just Like High School Textbook Drawings. Sciencexpress Those little hexagons you studied in high-school chemistry -- they are real things! 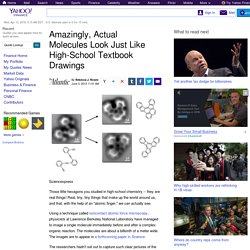 Real, tiny, tiny things that make up the world around us, and that, with the help of an "atomic finger," we can actually see. Using a technique called noncontact atomic force microscopy, physicists at Lawrence Berkeley National Laboratory have managed to image a single molecule immediately before and after a complex organic reaction. The molecules are about a billionth of a meter wide. The images are to appear in a forthcoming paper in Science. The researchers hadn't set out to capture such clear pictures of the covalent bonds between the atoms. Their first approach, using a scanning tunneling microscope, provided images that were too fuzzy. The resolution of the resulting images was stunning. H/t @JadAbumrad via Why Evolution Is True. 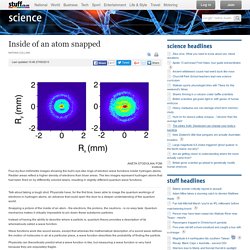 Redder areas reflect a higher density of electrons than bluer areas. The two images represent hydrogen atoms that had been fired on by differently colored lasers, resulting in slightly different quantum wave functions. Talk about taking a tough shot. Snapping a picture of the inside of an atom - the electrons, the protons, the neutrons - is no easy task. Instead of having the ability to describe where a particle is, quantum theory provides a description of its whereabouts called a wave function. First-ever high-resolution images of a molecule as it breaks and reforms chemical bonds. When Felix Fischer of the U.S. Department of Energy's Lawrence Berkeley National Laboratory (Berkeley Lab) set out to develop nanostructures made of graphene using a new, controlled approach to chemical reactions, the first result was a surprise: spectacular images of individual carbon atoms and the bonds between them.

"We weren't thinking about making beautiful images; the reactions themselves were the goal," says Fischer, a staff scientist in Berkeley Lab's Materials Sciences Division (MSD) and a professor of chemistry at the University of California, Berkeley. "But to really see what was happening at the single-atom level we had to use a uniquely sensitive atomic force microscope in Michael Crommie's laboratory.

" Crommie is an MSD scientist and a professor of physics at UC Berkeley. What the microscope showed the researchers, says Fischer, "was amazing. " The researchers report their results in the June 7, 2013 edition of the journal Science , available in advance on Science Express .