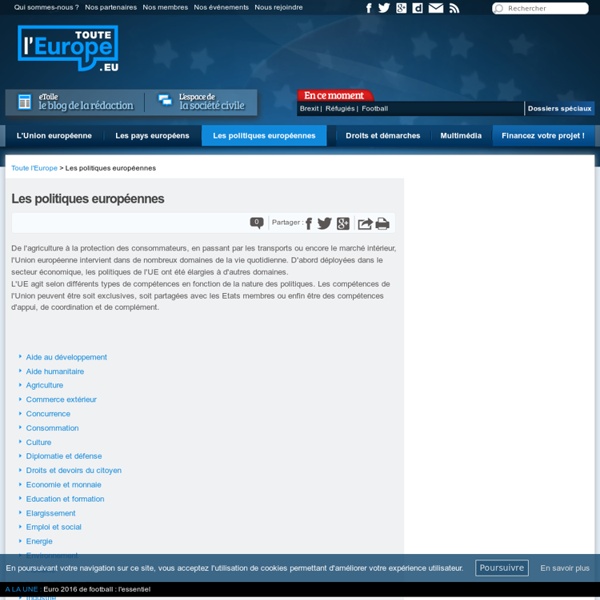 Informations de base – Initiative citoyenne européenne - Commission européenne Basic facts What is a European citizens' initiative? A European citizens' initiative is an invitation to the European Commission to propose legislation on matters where the EU has competence to legislate. List of countries by GDP (nominal) This article includes a list of countries in the world sorted by their gross domestic product (GDP), the market value of all final goods and services from a nation in a given year. The GDP dollar estimates presented here are calculated at market or government official exchange rates. Several economies which are not considered to be countries (world, the EU, and some dependent territories) are included in the lists because they appear in the sources.

The "Austerity Myth": Gain Without Pain? NBER Working Paper No. 17571Issued in November 2011NBER Program(s): EFG IFM POL As governments around the world contemplate slashing budget deficits, the “expansionary fiscal consolidation hypothesis” is back in vogue. I argue that, as a statement about the short run, it should be taken with caution.

Income Distribution and Poverty There is widespread concern that economic growth has not been shared fairly, and that the current economic crisis further widens the gap between rich and poor. The work below examines trends in inequality and poverty for OECD and non-OECD countries. It analyses possible causes for growing inequalities, such as globalisation, skill-biased technological change and changes in policy fashion. And it assesses the effectiveness of social and labour market policies in tackling poverty and excessive inequalities. What's new? Official text: The Alliance's New Strategic Concept (1991), 07-Nov.-1991 07 Nov. 1991 – 08 Nov. 1991 At their meeting in London in July 1990, NATO's Heads of State and Government agreed on the need to transform the Atlantic Alliance to reflect the new, more promising, era in Europe. While reaffirming the basic principles on which the Alliance has rested since its inception, they recognised that the developments taking place in Europe would have a far-reaching impact on the way in which its aims would be met in future. In particular, they set in hand a fundamental strategic review. The resulting new Strategic Concept is set out below.

Informations concernant l'initiative – Initiative citoyenne européenne - Commission européenne Disclaimer : The contents of this page are the sole responsibility of the organisers of the initiatives. The texts reflect solely the views of their authors and can in no way be taken to reflect the views of the European Commission. The Commission cannot be held responsible for any use which may be made of the information contained therein. Subject-matter: Proposition d'un cadre législatif visant à l’abolition de l’expérimentation animale dans l’Union européenne. Provisions of the Treaties considered relevant by the organisers: Article 13 du Traité sur le Fonctionnement de l'Union Européenne Annex: Other languages available: EN IT Statista Statista is an online statistics portal. It provides access to data from market and opinion research institutions, as well as from business organizations and government institutions in English and German. According to the company, the platform has statistics on over 60,000 topics from more than 18,000 sources.[1] Profile[edit] Statista offers statistics and survey results in the form of bar charts and tables.

Large Changes in Fiscal Policy: Taxes Versus Spending NBER Working Paper No. 15438Issued in October 2009NBER Program(s): POL We examine the evidence on episodes of large stances in fiscal policy, both in cases of fiscal stimuli and in that of fiscal adjustments in OECD countries from 1970 to 2007. Fiscal stimuli based upon tax cuts are more likely to increase growth than those based upon spending increases. As for fiscal adjustments, those based upon spending cuts and no tax increases are more likely to reduce deficits and debt over GDP ratios than those based upon tax increases. In addition, adjustments on the spending side rather than on the tax side are less likely to create recessions. We confirm these results with simple regression analysis.

Inclusion sociale 'Social inclusion, demography and migration' is one of the seven key challenges of the EU Sustainable Development Strategy (EU SDS). The strategy sets out the objective of creating a socially inclusive society by taking into account solidarity between and within generations and to secure and increase the quality of life of citizens as a precondition for lasting individual well-being. The following set of indicators was agreed to measure progress in the social inclusion theme. Evaluation of changes in social inclusion (2013 monitoring)

Sign the ECI! You can sign the European Initiative (EI) against TTIP and CETA using the form below. Sign here in English or choose a language from the list further below. If you do not want to sign online or if you would like to collect signatures among your family and friends, you can download a signature sheet in your language here. Other languages: UK National Statistics Publication Hub Incidence of TB in Cattle, Great Britain - Data to January 2014 Release time: 9:30am Agriculture and Environment | Environment, Food and Rural Affairs | GB Latest national statistics bringing together various sources of statistics relating to the incidence of TB in Cattle, Great Britain according to arrangements approved by the UK Statistics Authority. Regional labour market statistics - April 2014 Labour Market | Office for National Statistics | UK