The History of the Internet in a Nutshell 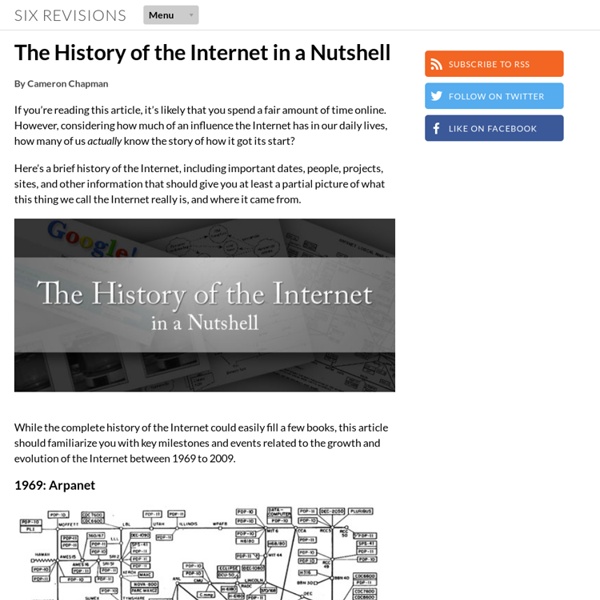 By Cameron Chapman If you’re reading this article, it’s likely that you spend a fair amount of time online. However, considering how much of an influence the Internet has in our daily lives, how many of us actually know the story of how it got its start? Here’s a brief history of the Internet, including important dates, people, projects, sites, and other information that should give you at least a partial picture of what this thing we call the Internet really is, and where it came from. While the complete history of the Internet could easily fill a few books, this article should familiarize you with key milestones and events related to the growth and evolution of the Internet between 1969 to 2009. 1969: Arpanet Arpanet was the first real network to run on packet switching technology (new at the time). The first message sent across the network was supposed to be "Login", but reportedly, the link between the two colleges crashed on the letter "g". 1969: Unix 1970: Arpanet network 1971: Email

Force YouTube to buffer your entire video Back in the good old days, when you started watching a YouTube video, the entire thing would download (or "buffer") in the background, thus ensuring a relatively smooth playback experience. If you had a slow connection, you could simply pause the video until you saw the "buffer bar" complete its journey from left to right. But thanks to YouTube's switch to a new protocol (Dynamic Adaptive Streaming over HTTP, or DASH, if you're interested), that trick no longer works. Now, when you play a video, YouTube buffers only a small amount. And that can lead to stuttering, frequently interrupted playback. PC World - The 50 Most Important People on the Web Despite what Time magazine would have you believe, you are not the most powerful or influential person on the Web. At PC World we love online personals, social networks, and videos of people falling on their keisters as much as the next person, but without the folks who create the Craigslists, MySpaces, and YouTubes of the world, much of the Web's potential would be lost among spam sites and other online detritus. So who's making the biggest impact online? We considered hundreds of the Web's most noteworthy power brokers, bloggers, brainiacs, and entrepreneurs to figure out whose contributions are shaping the way we use the Web. We whittled the list down to the top 50--well, actually the top 62--people, but as you'll see, there are some you just can't separate.

Accurately Keep Track Of What You Do On The Computer & For How Long With RescueTime If you spend a considerable amount of time working at your computer with no Corporate Big Brother to monitor what you’re doing, you may find yourself spending a bit more time than you should be tweeting, Facebooking, and procrastinating your day away. While there’s nothing wrong with good old leisure activities, the adage “time is money” means a lot if you’re reading mentions on Twitter instead of dealing with a work-related project deadline. In this regard, a very useful program called RescueTime can act as your own little time tracking service, clocking what you do on your computer. How It Works

Start Here By Leo Babauta I know a lot of people who fall into a slump, losing the habit of exercise, procrastinating with work, slipping into a bad diet, and generally not feeling motivated. It’s hard to get out of a slump like that. It’s hard to get going again, to get started when all the forces of inertia are against you. Top 10 Tech Concepts You Always Wanted To Learn About (But Never Did) Store your data on someone else's computer, hope they don't do anything bad with it or decide to shut down. Stallman calls it "Careless Computing". If you put personal data in-the-cloud like future plans., trips, your current GPS location, then you should expect that data to be shared all over the world with nice people, nice companies and criminals (looking for when to rob you).

From semantic Web (3.0) to the WebOS (4.0) Nova Spivack of Radar Networks maps out his view of the evolution of the Web over the next 25 years. Nova said he isn't sure about exact dates or technologies on the top end of the map, but his view of ten-year blocks to fully evolve each phase is realistic. Nor should we get hung up on the naming convention--1.0, 2.0, etc. The idea that the next major deepening of the Internet as a platform will involve the semantic Web is reasonable, and was the subject of much discussion in November. Nova's stealth-mode company is working on what he describes as a "Java-based framework for semantic web applications and services that has some similarities to Ruby on Rails, and also includes a lot of other technology such as our extremely fast and scaleable storage layer for semantic data tuples, powerful semantic query capabilities, and a range of algorithms for analyzing data and doing intelligent things for users."

20 essential PC shortcuts I've always liked that Windows gives me multiple ways to perform popular tasks. Say you want to print something. You could go to the File menu and select the Print command, or you can press the Ctrl button and the letter P. Ctrl+P is just one example of a keyboard shortcut. Shortcuts combine two or more keys to do something special that neither key does alone. Is the Personalization of the Web Making Us Dumber? As a Mashable reader, you’re probably well-aware that Facebook’s News Feed and Google’s search results adjust based on your behavior and demonstrated preferences. But are these and the web’s other algorithms making us collectively uninformed as a society? That’s the argument that Eli Pariser, the former executive director of MoveOn.org, made in a TED talk on Thursday in Long Beach, California. Pariser started his talk by noting a trend he saw on Facebook.