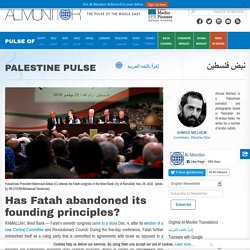 (photo by REUTERS/Mohamad Torokman) Author: Ahmad Melhem Posted December 16, 2016 RAMALLAH, West Bank — Fatah’s seventh congress came to a close Dec. 4, after its election of a new Central Committee and Revolutionary Council. During the five-day conference, Fatah further entrenched itself as a ruling party that is committed to agreements with Israel as opposed to a national liberation movement with a variety of political views. This was solidified when the movement adopted the Palestinian Authority (PA) political program, which is based on negotiations and coexistence with Israel, even though this program has proven to be a total fiasco since the signing of the Oslo Accord in 1993. 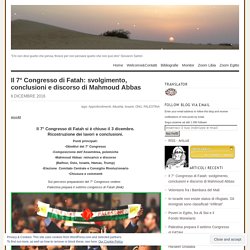 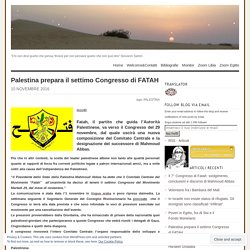 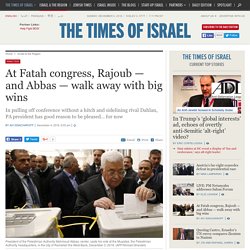 Get The Times of Israel's Daily Edition by email and never miss our top stories Free Sign up! Coming in first place was Marwan Barghouti, held in Israeli prison for murder after orchestrating deadly terror attacks during the Second Intifada, followed by Jibril Rajoub, the head of the Palestinian Football Association (PFA). For months, Rajoub has been seen as the most popular personality in Fatah, after Bargouhti, of course, and Palestinian Authority President Mahmoud Abbas. Next on the list are Mahmud Eshtawi, Hussein Eshtawi and Muhammed Al-Alul — all of whom are allies of Rajoub. 'Fatah Central Committee' Sees Light Ahead of Preparing For Abbas Successor - ASHARQ AL-AWSAT English. » This Week in Palestine Week 48 2016– IMEMC News. Download / Listen Here. 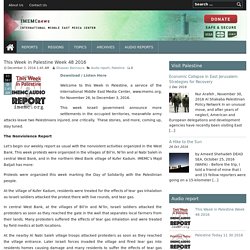 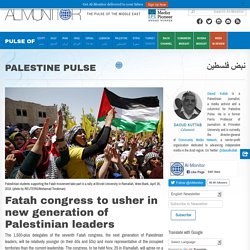 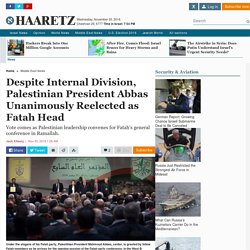 He had been expected to deliver the gathering’s keynote speech later in the evening, but it was postponed until Wednesday. Though there are 1,411 members of this body, only 1,320 members are attending, after dozens of members who live in Gaza and in Lebanese refugee camps were denied entry permits by Israel. Some other activists are boycotting the confab, while a few, who are identified with Mohammed Dahlan, an Abbas rival, were not permitted to attend. The conference, which will run through Saturday, is taking place under the shadow of serious disagreements and threats of schism in the movement that have sparked clashes throughout the West Bank. The absence of a diplomatic horizon and the ongoing rift between the West Bank and Gaza Strip is also weighing on the atmosphere. Abbas re-elected party leader as #Fatah opens rare congress #Palestinians #MahmudAbbas. Fatah holds congress amid Abbas' succession speculation - News from Al Jazeera. 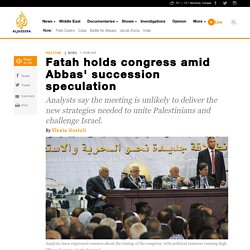 Up to 1,400 invited members are expected to design the movement's strategy for the next five years. The congress will also elect Fatah's 23-member Central Committee, presided by Abbas, and its 132-member Revolutionary Council. Abbas is said to be under pressure from Arab states to name a successor. Expert: Abbas Family Corruption Preventing PA President from Naming Successor. Palestinian Authority President Mahmoud Abbas, 81, recently refused a request from four Arab states to name a successor because he will only pick someone who will preserve his sons’ business empire, longtime Arab affairs correspondent Yoni Ben Menachem wrote Wednesday for the Jerusalem Center for Public Affairs. 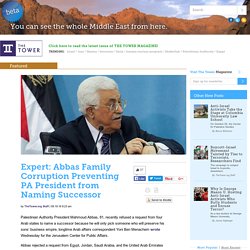 Abbas rejected a request from Egypt, Jordan, Saudi Arabia, and the United Arab Emirates to allow longtime rival Mohammed Dahlan to return from exile and prepare to be his successor, Ben Menachem reported. Under pressure, Abbas plans first Fatah congress since 2009. RAMALLAH (AFP) — Palestinian Authority President Mahmoud Abbas’s Fatah party aims to hold its first congress since 2009 by the end of this year, an official said, in what some analysts have called a bid by the 81-year-old to stave off rivals. 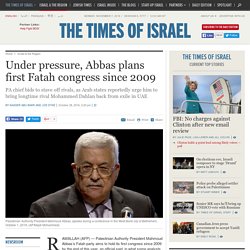 Get The Times of Israel's Daily Edition by email and never miss our top stories Free Sign up! The plan to hold the congress of the mainstream party he heads comes as Arab states have reportedly been pressuring Abbas to bring longtime rival Mohammed Dahlan back from exile in the United Arab Emirates. While Abbas’s advisers insist the congress is being organized simply because it is overdue, some analysts see it as an opportunity for him to reshuffle key positions and sideline Dahlan allies. Fatah's leadership in danger as Dahlan prepares to take over. Untitled. (MaanImages) PLO official says internal vote delayed for about 3 months. The Palestine Liberation Organization's parliament says it's delaying internal leadership elections for at least three months, in an announcement that made the anticipated postponement official.

Salem Al-Zanoun, the speaker of parliament, told reporters on Wednesday that Palestinian President Mahmoud Abbas has agreed to delay the Palestinian National Council meeting, originally set for next week, to give more time to prepare for the vote. The PLO parliament has more than 700 members, including many in the Palestinian diaspora. A quorum of two-thirds is needed for a session and there was concern it could not be met. Abbas had called for a meeting of the parliament to elect a new PLO leadership body. Critics have alleged Abbas wanted to use the hastily arranged session to sideline rivals and promote loyalists.

And when Abbas goes? The Palestinian National Council (PNC) is expected to meet this month in its first session since 2009 to accept the resignation of Mahmoud Abbas as chairman of the Palestine Liberation Organization (PLO), along with more than half the Executive Committee’s 18 members. The PNC does of course have the option of rejecting some or all of the resignations, and in any case Abbas still wears several hats: he remains head of state, President of the Palestinian Authority, commander-in-chief, and head of the Fatah political party. Moreover, all those who resign are free to stand again. Palestinians at home and in exile don’t know whether to laugh or cry at the unfolding spectacle, which may herald a succession process. Abbas rival calls for ouster of Palestinian leader.

Mohammed Dahlan criticized Mahmud Abbas, saying all his decisions should be voided by next congress A prominent rival of president Mahmud Abbas called for the ouster of the veteran leader on Monday as Palestinians seek to organise a congress for the first time in nearly 20 years. Mohammed Dahlan, once a leading figure in Abbas's Fatah party but now in exile in Dubai, took to his Facebook page to criticise the Palestinian president. His comments came after Abbas resigned Saturday as head of the Palestine Liberation Organisation's Executive Committee in a bid to force new elections for the top body. His resignation along with more than half of the 18-member committee will only take effect with a meeting of the Palestine National Council. The PNC is a congress of 740 members representing those who live in the Palestinian territories and in the diaspora.

It should also "declare the State of Palestine and immediately call presidential and legislative elections," he said. Challenges ahead for Fatah. Palestinian Fatah supporters carry Fatah flags during a rally marking the 10th anniversary of the death of late Palestinian leader Yasser Arafat, in the West Bank city of Ramallah, Nov. 11, 2014. (photo by REUTERS/Finbarr O'Reilly) Author: Daoud Kuttab Posted December 24, 2014 On Jan. 1, 1965, a military communique was issued in Kuwait announcing the first armed Palestinian operation against Israel stemming from south Lebanon. Iran, PA to Cooperate against Israel.

JERUSALEM, Israel -- Palestinian Authority President Mahmoud Abbas is planning to lead a delegation to Tehran within a couple of months, according to a senior member of the Palestine Liberation Organization. PLO member Ahmad Majdalani discussed Abbas' upcoming visit during meetings in Tehran over the past two days with Iranian Foreign Minister Mohammed Zarif and President Hassan Rouhani. Majdalani said Iranian officials agreed to work with the P.A. to organize a conference of international leaders aimed at forcing Israel to dismantle its nuclear program, Jerusalem Post Palestinian Affairs correspondent Khaled Abu Toameh reported. According to the report, Majdalani also blamed Israel for the failed peace process and asked Iran to support its unilateral statehood efforts with the international community. Majdalani also reportedly discussed repeated failures by the PLO's Fatah faction to form a unity government with Hamas, the Palestinian faction controlling the Gaza Strip.

Abbas' resignation rumors intensify. Palestinian President Mahmoud Abbas attends a Palestine Liberation Organization Executive Committee meeting in the West Bank city of Ramallah, March 19, 2015. (photo by REUTERS/Mohamad Torokman) Author: Ahmad Melhem Posted August 13, 2015 RAMALLAH, West Bank — Leaked information that Palestinian President Mahmoud Abbas allegedly intends to resign and about the identity of his successor has grabbed Palestinians’ attention anew. Abbas has been insisting for some time now that he will not run again to head the Palestinian Authority whenever elections are eventually held, but he has also not appointed a vice president, who would be his likely successor.