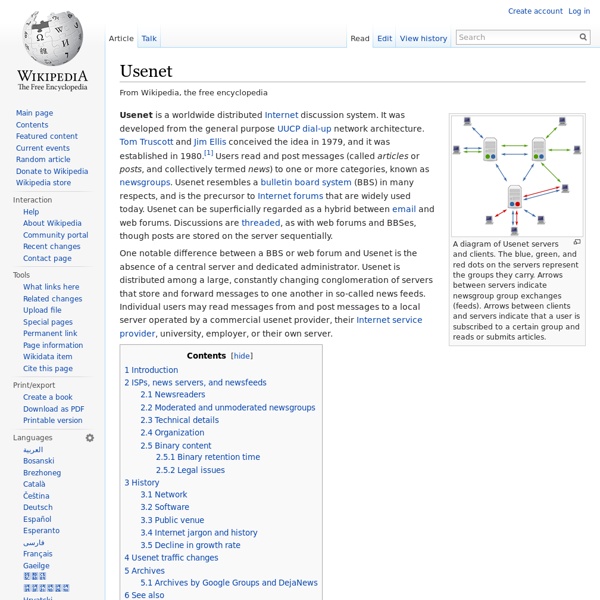 A diagram of Usenet servers and clients. The blue, green, and red dots on the servers represent the groups they carry. Arrows between servers indicate newsgroup group exchanges (feeds). Arrows between clients and servers indicate that a user is subscribed to a certain group and reads or submits articles. One notable difference between a BBS or web forum and Usenet is the absence of a central server and dedicated administrator. Introduction[edit] The articles that users post to Usenet are organized into topical categories called newsgroups, which are themselves logically organized into hierarchies of subjects. In most newsgroups, the majority of the articles are responses to some other article. When a user posts an article, it is initially only available on that user's news server. The format and transmission of Usenet articles is similar to that of Internet e-mail messages. Today, Usenet has diminished in importance with respect to Internet forums, blogs and mailing lists. History[edit]

Audiogalaxy Audiogalaxy ceased operations on January 31, 2013. History[edit] Audiogalaxy's stated mission was to facilitate sharing of music, though it was also notable for its strong community due to such features as chat-enabled groups and per-artist internet forums. This strong community also facilitated a very broad reach of content across many genres, particular those that tend to remain under-developed in more modern systems. In June 2008, CNET hailed this incarnation of Audiogalaxy as one of the greatest defunct websites in history.[1] Conflict with RIAA over sharing of copyrighted material[edit] On May 9, 2002, Audiogalaxy required songs to be in the sender's shared folder to be sent. Even though Audiogalaxy claimed that they were trying to cooperate with the music industry and block copyrighted songs from their network, many of the network's users continued to share unauthorized copyrighted music files, causing Audiogalaxy to face a lawsuit by the RIAA on May 24, 2002. Relaunch[edit]

Is Usenet Safer than BitTorrent? Shhh... Stick to bittorrent kid. Usenets the devil and I highly recommend against it. Geez. Flagged seriously? Good lord thank you for saying this. All this "the first rule of Usenet" BS has gone on for decades - give it up people, EVERYONE ALREADY KNOWS ABOUT USENET. Sorry "everyone" doesn't know about USENET. Like I mentioned to someone else in the same thread - the only barriers to everyone using usenet the same way everyone uses Bittorrent are inconvenience and cost - the fact that it's not easy, and most ISPs don't support binary newsgroups anymore. Sourceless numbers about p2p file sharing (numbers that clearly don't include BitTorrent) are beside the point, and make the assumption that the only use for Usenet is piracy, which I think is an argument you're not trying to make, are you? The percentage of the U.S. The number supplied pertains to sharing music, but one can safely assume the numbers hold for other types of file sharing.

John Titor John Titor's military insignia John Titor is the name used on several bulletin boards during 2000 and 2001 by a poster claiming to be a time traveler from 2036.[1] In these posts, Titor made numerous predictions (a number of them vague, some quite specific)[2] about events in the near future, starting with events in 2004. He described a drastically changed future in which the United States had broken into five smaller regions, the environment and infrastructure had been devastated by a nuclear attack, and most other world powers had been destroyed. To date, the story has been retold on numerous web sites, in a book, in a play, and the Japanese visual novel/anime Steins;Gate. Titor has also been discussed occasionally on the nationally-syndicated radio show Coast to Coast AM.[3] History[edit] The first posts appeared on the Time Travel Institute forums on November 2, 2000, under the name TimeTravel_0. Around 2003, various websites reproduced Titor's posts, re-arranging them into narratives.

Hyperlink Napster Later systems successfully followed and elaborated on Napster's file-copying methods, including Gnutella, Freenet, Bit Torrent and many others. Some systems, like LimeWire, Grokster, Madster and the original eDonkey network, were shut down or altered under similar circumstances. Origin[edit] Napster was co-founded by Shawn Fanning, John Fanning, and Sean Parker.[2][3][4][5][6][7][8][9] Initially, Napster was envisioned as an independent peer-to-peer file sharing service. The service operated between June 1999 and July 2001.[10] Its technology allowed people to easily share their MP3 files with other participants.[11] Although the original service was shut down by court order, the Napster brand survived after the company's assets were liquidated and purchased by other companies through bankruptcy proceedings.[12] History[edit] These reasons aside, many other users simply enjoyed trading and downloading music for free. Macintosh version[edit] Legal challenges[edit] Promotional power[edit]

Tor (anonymity network) Tor (previously an acronym for The Onion Router)[4] is free software for enabling online anonymity and censorship resistance. Tor directs Internet traffic through a free, worldwide, volunteer network consisting of more than five thousand relays[5] to conceal a user's location or usage from anyone conducting network surveillance or traffic analysis. Using Tor makes it more difficult to trace Internet activity, including "visits to Web sites, online posts, instant messages, and other communication forms", back to the user[6] and is intended to protect the personal privacy of users, as well as their freedom and ability to conduct confidential business by keeping their internet activities from being monitored. The term "onion routing" refers to layers of encryption, nested like the layers of an onion, used to anonymize communication. In 2013, Jacob Appelbaum described Tor as a "part of an ecosystem of software that helps people regain and reclaim their autonomy. Steven J.

Eternal September In Usenet slang, Eternal September (or the September that never ended)[1] began in September 1993,[2] the month that Internet service provider America Online began offering Usenet access to its tens of thousands, and later millions, of users. Before then, every year in September, a large number of new university freshmen acquired access to Usenet for the first time, and took some time to become accustomed to Usenet's standards of conduct and "netiquette". But, after a month or so, these new users would learn the networks' social norms or simply tire of using the service. However, for the pre-existing users of Usenet, the influx of new users from September 1993 onwards was a new and endless manifestation of the phenomenon. This was in part because the service providers (such as AOL) made little effort to educate their users about Usenet customs, but it was also because of the large scale and seemingly endless intake of new users. References[edit] External links[edit]

Freenet History[edit] The origin of Freenet can be traced to Ian Clarke's student project at the University of Edinburgh, which he completed as a graduation requirement in the Summer of 1999.[9][10][11] Ian Clarke's resulting unpublished report "A distributed decentralized information storage and retrieval system" (1999) provided foundation for the seminal paper written in collaboration with other researchers, "Freenet: A Distributed Anonymous Information Storage and Retrieval System" (2001).[12][13] According to CiteSeer, it became one of the most frequently cited computer science articles in 2002.[14] The distributed data store of Freenet is used by many third-party programs and plugins to provide microblogging and media sharing,[16] anonymous, decentralised version tracking,[17] blogging,[18] a generic web of trust for decentralized spam resistance,[19] Shoeshop for using Freenet over Sneakernet,[20] and many more. Features and user interface of the Freenet[edit] Content[edit] Network[edit] Frost