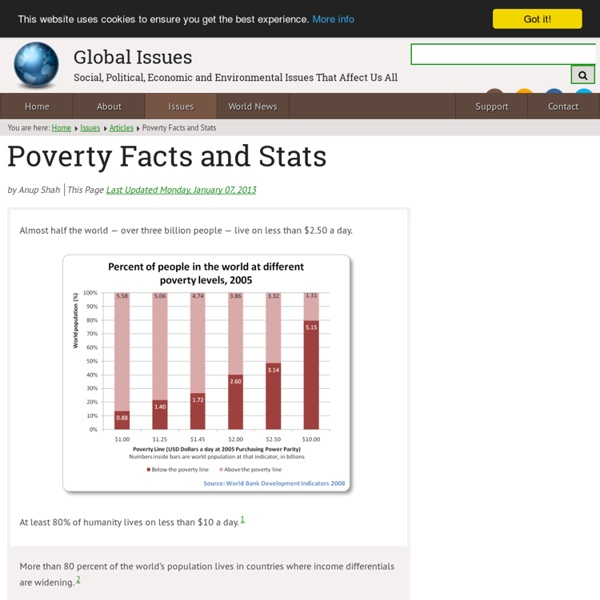 This figure is based on purchasing power parity (PPP), which basically suggests that prices of goods in countries tend to equate under floating exchange rates and therefore people would be able to purchase the same quantity of goods in any country for a given sum of money. That is, the notion that a dollar should buy the same amount in all countries. Hence if a poor person in a poor country living on a dollar a day moved to the U.S. with no changes to their income, they would still be living on a dollar a day. The new poverty line of $1.25 a day was recently announced by the World Bank (in 2008). For many years before that it had been $1 a day. But the $1 a day used then would be $1.45 a day now if just inflation was accounted for. The new figures from the World Bank therefore confirm concerns that poverty has not been reduced by as much as was hoped, although it certainly has dropped since 1981.

Related:  Poverty in the US • Poverty & Inequality

The World Inequality Database on Education (WIDE) – a new visualization tool to measure marginalization To coincide with the launch of the UN Secretary-General’s Education First initiative, the Education for All Global Monitoring Report Team will launch a new interactive website tomorrow – the World Inequality Database on Education (WIDE). In an exclusive preview for this blog, the Report’s director Pauline Rose explains what WIDE shows and why it is important. I am delighted that the UN Secretary-General is putting Education First by launching his new initiative for education. Three years before the Education for All deadline, it is a much needed push to get more children into school and ensure they learn – especially for the poor and marginalized. In order to design policies to reach the marginalized, it is vital to know who they are and where they live.

National Poverty Center How does the United States measure poverty? The United States determines the official poverty rate using poverty thresholds that are issued each year by the Census Bureau. The thresholds represent the annual amount of cash income minimally required to support families of various sizes. The methodology for calculating the thresholds was established in the mid-1960s and has not changed in the intervening years. Social Perspective on Development Poverty Eradication Poverty entails more than the lack of income and productive resources to ensure sustainable livelihoods. Its manifestations include hunger and malnutrition, limited access to education and other basic services, social discrimination and exclusion as well as the lack of participation in decision-making. Various social groups bear disproportionate burden of poverty. The World Social Summit identified poverty eradication as an ethical, social, political and economic imperative of mankind and called on governments to address the root causes of poverty, provide for basic needs for all and ensure that the poor have access to productive resources, including credit, education and training.

15 Shocking Poverty Statistics That Are Skyrocketing As The American Middle Class Continues To Be Slowly Wiped Out The "America" that so many of us have taken for granted for so many decades is literally disintegrating right in front of our eyes. Most Americans are still operating under the delusion that the United States will always be "the wealthiest nation" in the world and that our economy will always produce large numbers of high paying jobs and that the U.S. will always have a very large middle class. But that is not what is happening. The very foundations of the U.S. economy have rotted away and we now find ourselves on the verge of an economic collapse. Famine & World Hunger - World Vision Australia 2017 situation update: Humanitarian assistance is urgently needed in East Africa. Without immediate scale-up of international action, famine is likely to spread and put millions of lives at risk. Across Ethiopia, Kenya, Somalia and South Sudan, a hunger crisis has put 22 million people in urgent need of life-saving humanitarian assistance.

Poverty Poverty is general scarcity or dearth, or the state of one who lacks a certain amount of material possessions or money.[1] Absolute poverty or destitution refers to the deprivation of basic human needs, which commonly includes food, water, sanitation, clothing, shelter, health care and education. Relative poverty is defined contextually as economic inequality in the location or society in which people live.[2][3] After the industrial revolution, mass production in factories made production goods increasingly less expensive and more accessible. Of more importance is the modernization of agriculture, such as fertilizers, to provide enough yield to feed the population.[4] The supply of basic needs can be restricted by constraints on government services such as corruption, tax avoidance, debt and loan conditionalities and by the brain drain of health care and educational professionals. Etymology The English word "poverty" via Anglo-Norman povert.

Education Education is a fundamental human right. Every girl and boy, everywhere, is entitled to attend school and learn. UNICEF is dedicated to making sure that all children can enjoy their right to a quality education, from early learning opportunities that lay the groundwork for success in school, all the way through secondary school. Across the world, some children are more likely to miss out on education than others. That deprivation has lifelong consequences that often mean that the next generation, too, will start out at a disadvantage. The resulting cycles of inequality and deprivation thwart the potential of both individuals and societies. 2011 HHS Poverty Guidelines [ Latest Poverty Guidelines ] [ Federal Register Notice, January 20, 2011 — Full text ] [ Prior Poverty Guidelines and Federal Register References Since 1982 ] [ Frequently Asked Questions (FAQs) ] [ Further Resources on Poverty Measurement, Poverty Lines, and Their History ] [ Computations for the 2011 Poverty Guidelines ] There are two slightly different versions of the federal poverty measure: The poverty thresholds, and The poverty guidelines. The poverty thresholds are the original version of the federal poverty measure.