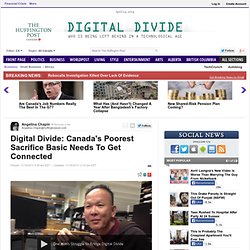 He has no idea how to answer it. How could he be so stupid? He’s owned the thing for two damned months, but still feels like a baby holding a grown-up’s toy. As the ringtone becomes louder, his anxiety mounts. Green circles emanate from the phone icon, taunting him like a bully. No. Why is something so simple for everyone else so hard for me? Stupid, stupid. Yuji hands me the Samsung Galaxy S3. Why did Samsung screw up so badly?

Stupid, stupid company. The phone stops ringing. He first touched a computer at 56, almost 40 years after moving to Canada. I first touched a computer when I was around 11. His Japanese accent is cotton balls-in-his-cheeks thick, masking his sophisticated vocabulary. For most of his life, Yuji’s excessive curiosity and erratic personality have left him on the fringes. A Homeless Man With a BlackBerry Shows Us What Determination Looks Like. Just becomes he doesn't have a home mean he doesn't deserve a life. 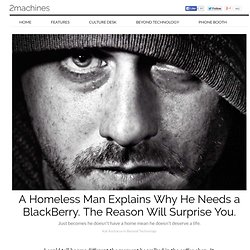 I could tell he was different the moment he walked in the coffee shop. It wasn’t his appearance. He looked presentable, if a little rough around the edges, clutching an old BlackBerry to his barrel chest. It was how he moved: warily, shoulders hunched over and eyes darting. The body language would read as suspicious, if not for the flicker of fear and apprehension in his eyes — as if he was scared of being noticed, vigilant to his surroundings and desperately trying to blend in at the same time. He ordered a coffee, carefully counting out coins on the counter. Did someone have some cash jobs for him? Bert isn’t unsheltered. He made it clear: he hadn’t given up. It wasn’t easy to engage him in conversation.

Homeless Teens Say Cell Phones as Important as Food. Homeless teens value smartphones as much as eating or a drug habit, underscoring the importance of the devices for day-to-day survival. 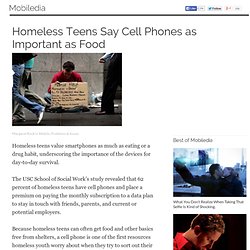 The USC School of Social Work’s study revealed that 62 percent of homeless teens have cell phones and place a premium on paying the monthly subscription to a data plan to stay in touch with friends, parents, and current or potential employers. Because homeless teens can often get food and other basics free from shelters, a cell phone is one of the first resources homeless youth worry about when they try to sort out their declining situation, according to the study. “Cell phones have changed what it means to be a homeless teen as these youth can look for help beyond the streets,” said Eric Rice, lead author on the study.

“If you don’t have to steal to get a meal, the chances of you going to jail decrease.” How Homeless People Use Technology. 6 Ways Mobile Technology Has Transformed the World's Poor. Mobile technology is rapidly changing the face of communication in the most remote areas of the world. 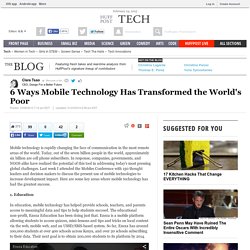 Today, out of the seven billion people in the world, approximately six billion are cell phone subscribers. In response, companies, governments, and NGOS alike have realized the potential of this tool in addressing today's most pressing global challenges. Last week I attended the Mobiles Conference with 150 thought leaders and decision makers to discuss the present use of mobile technologies to increase development impact.

Here are some key areas where mobile technology has had the greatest success. 1. In education, mobile technology has helped provide schools, teachers, and parents access to meaningful data and tips to help students succeed. Cellphones - Third World and Developing Nations - Poverty - Technology. Abundance the Book - by Peter Diamandis and Steven Kotler — Abundance - the Future is Better Than You Think - is a new book by Peter Diamandis and Steven Kotler. Official Abundance the Book website. Can Technology End Poverty? - Susan Davis. By Susan Davis | 10:00 AM March 22, 2013 If you believe the hype, technology is going to help us end global poverty. 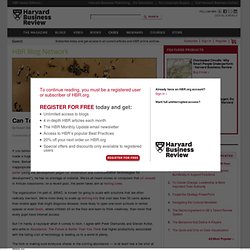 Advances have indeed made a huge difference in the lives of the poor, but there’s also a healthy amount of skepticism out there. Berkeley researcher Kentaro Toyama has a blog dedicated to calling out naïve or inappropriate uses of information and communication technologies (ICT). Calling himself the ICT4D jester (using the development jargon for “information and communication technologies for development”), he has no shortage of material. We’ve all heard stories of computers that sit unused in African classrooms; on a recent post, the jester takes aim at texting cows. The organization I’m part of, BRAC, is known for going to scale with solutions that are often radically low-tech.

But I’m hardly a naysayer when it comes to tech. The trick is making sure everyone shares in the coming abundance — or at least has a fair shot at doing so. Invest in local innovation. Iqbal Quadir: How mobile phones can fight poverty. How Mobile Tech Fights Poverty (INFOGRAPHIC)