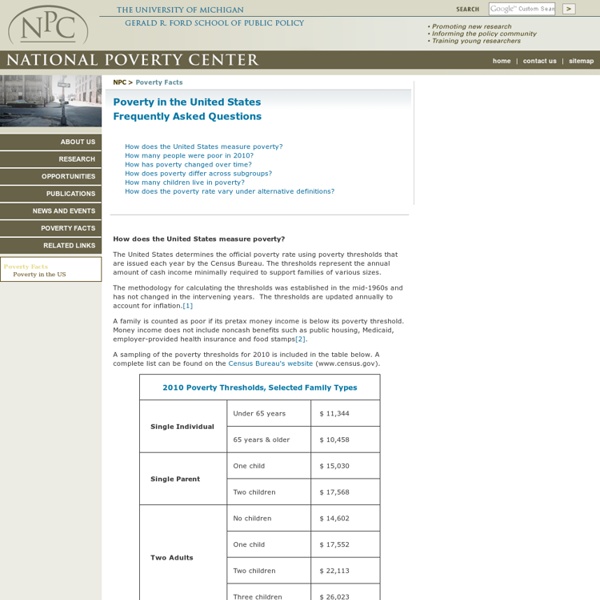 How does the United States measure poverty? The United States determines the official poverty rate using poverty thresholds that are issued each year by the Census Bureau. The thresholds represent the annual amount of cash income minimally required to support families of various sizes. The methodology for calculating the thresholds was established in the mid-1960s and has not changed in the intervening years. A family is counted as poor if its pretax money income is below its poverty threshold. A sampling of the poverty thresholds for 2010 is included in the table below. SOURCE: U.S. Poverty guidelines are a simplified version of poverty thresholds and are issued by the Department of Health and Human Services to determine financial eligibility for certain federal programs. How many people were poor in 2010? In 2010, 15.1 percent of all persons lived in poverty. How has poverty changed over time? Since the late 1960s, the poverty rate for people over 65 has fallen dramatically.

Geography of Poverty Northeast | msnbc FLINT, Michigan — Every summer a fresh crop of working girls make their way to Fenton Road, a black eye of a commercial strip that runs through the heart of this city’s residential south side. Some are locals born and bred. Others come from nearby towns or from across the state. Any number are addicted to drugs or hard living, bruised by life in a patchwork of post-industrial cities whose golden days are but a memory, if not a myth. “They only ever last a summer or two,” said a grizzled man in his mid-40s, squatting beneath the awning of a storefront on Fenton Road. A couple of the man’s buddies joined him in escaping the afternoon heat, nodding in unison as the neighborhood came alive with folks chatting on sidewalks, kids riding bicycles, and drug addicts and early-shift sex workers streaming together in a tangle of humanity. “No job’s going to hire me,” she said, gulping from a plastic cup of Mountain Dew the size of her head. “I won’t be in Flint for long,” she said wistfully.

Poverty.com - Hunger and World Poverty Causes of Poverty Author and Page information by Anup ShahThis Page Last Updated Sunday, September 28, 2014 Almost half the world — over 3 billion people — live on less than $2.50 a day.The GDP (Gross Domestic Product) of the 41 Heavily Indebted Poor Countries (567 million people) is less than the wealth of the world’s 7 richest people combined.Nearly a billion people entered the 21st century unable to read a book or sign their names.Less than one per cent of what the world spent every year on weapons was needed to put every child into school by the year 2000 and yet it didn’t happen.1 billion children live in poverty (1 in 2 children in the world). 640 million live without adequate shelter, 400 million have no access to safe water, 270 million have no access to health services. 10.6 million died in 2003 before they reached the age of 5 (or roughly 29,000 children per day). Poverty is the state for the majority of the world’s people and nations. 14 articles on “Causes of Poverty” and 6 related issues: Aid

The world’s next great leap forward: Towards the end of poverty IN HIS inaugural address in 1949 Harry Truman said that “more than half the people in the world are living in conditions approaching misery. For the first time in history, humanity possesses the knowledge and skill to relieve the suffering of those people.” It has taken much longer than Truman hoped, but the world has lately been making extraordinary progress in lifting people out of extreme poverty. Between 1990 and 2010, their number fell by half as a share of the total population in developing countries, from 43% to 21%—a reduction of almost 1 billion people. Now the world has a serious chance to redeem Truman’s pledge to lift the least fortunate. Of the 7 billion people alive on the planet, 1.1 billion subsist below the internationally accepted extreme-poverty line of $1.25 a day. Take a bow, capitalism Nobody in the developed world comes remotely close to the poverty level that $1.25 a day represents. So caution is justified, but the goal can still be achieved. Markets v misery