This is what trying to maintain benefits in WA as a homeless person looks like during the pandemic : Seattle. Only Dr. you'll get for $16.00 is Dr. Pepper : ChoosingBeggars. 'People are just walking out in the middle of shifts': What it's like to work in a restaurant right now : news. Kyrsten Sinema Knocked by Ohio Democrat Nina Turner: 'Denying Women a Living Wage Is Sexist' : politics. Poor People's Campaign – A National Call for Moral Revival. Hotel Rooms for the Homeless Change Health Outcomes Beyond COVID — Shelterforce. 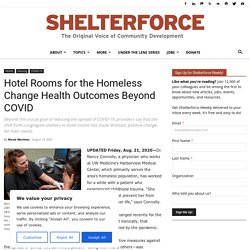 Nancy Connolly, a physician who works at UW Medicine’s Harborview Medical Center, which primarily serves the area’s homeless population, has worked for a while with a patient who experienced childhood trauma. “She has delusions that prevent her from moving on with her life,” says Connolly. But something changed recently for the better. Somewhat ironically, that change was spurred by the pandemic. As part of preventive measures against the spread of COVID-19, Connolly’s patient—along with many others—was temporarily moved from a congregate-style shelter to a hotel room. “This was the approach most shelters shifted to when it became clear that congregate housing would become a problem early on,” says Tom Murphy, vice president for policy and programs at the National Alliance to End Homelessness. The Gospel of Supply Side Jesus - post. Meatpacking in America: Still a Jungle Out There? . NOW. Week of 12.15.06 Swift & Co. 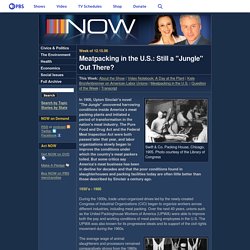 Packing House, Chicago, 1905. Photo courtesy of the Library of Congress. Hiltzik: Why hasn't meat packing changed since 'The Jungle' Kurt Vonnegut on Americans : books. Nearly half of American children living near poverty line. Nearly half of children in the United States live dangerously close to the poverty line, according to new research from the National Center for Children in Poverty (NCCP) at Columbia University's Mailman School of Public Health. 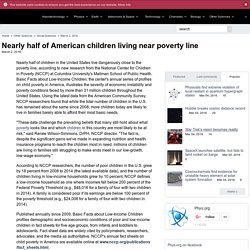 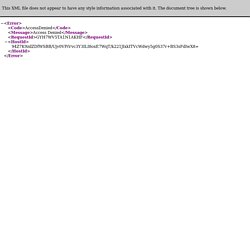 Millionaire uses fortune to help kids in struggling town. Harris Rosen went from a childhood in a rough New York City neighborhood to becoming a millionaire whose company owns seven hotels in Orlando, but his self-made success is not his proudest achievement. 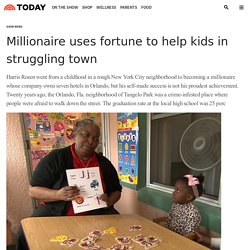 Twenty years ago, the Orlando, Fla. neighborhood of Tangelo Park was a crime-infested place where people were afraid to walk down the street. The graduation rate at the local high school was 25 percent. Mapping Poverty in America. More Than Half Of American Schoolchildren Now Live In Poverty. For the first time, more than half of U.S. public school students live in low-income households, according to a new analysis from the Southern Education Foundation. 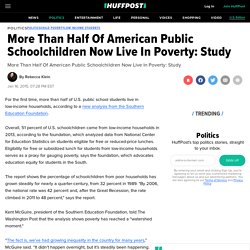 Overall, 51 percent of U.S. schoolchildren came from low-income households in 2013, according to the foundation, which analyzed data from National Center for Education Statistics on students eligible for free or reduced-price lunches. Eligibility for free or subsidized lunch for students from low-income households serves as a proxy for gauging poverty, says the foundation, which advocates education equity for students in the South. The report shows the percentage of schoolchildren from poor households has grown steadily for nearly a quarter-century, from 32 percent in 1989. "By 2006, the national rate was 42 percent and, after the Great Recession, the rate climbed in 2011 to 48 percent," says the report.

Generous welfare benefits make people more likely to want to work, not less. Survey responses from 19,000 people in 18 European countries, including the UK, showed that "the notion that big welfare states are associated with widespread cultures of dependency, or other adverse consequences of poor short term incentives to work, receives little support. 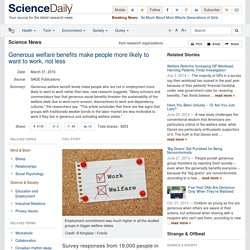 " Sociologists Dr Kjetil van der Wel and Dr Knut Halvorsen examined responses to the statement 'I would enjoy having a paid job even if I did not need the money' put to the interviewees for the European Social Survey in 2010. In a paper published in the journal Work, Employment and Society they compare this response with the amount the country spent on welfare benefits and employment schemes, while taking into account the population differences between states. Cm2012.pdf. National Child Abuse Statistics.

Children are suffering from a hidden epidemic of child abuse and neglect. 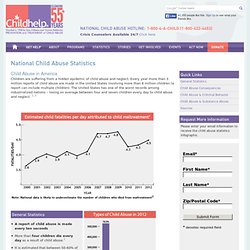 Every year more than 3 million reports of child abuse are made in the United States involving more than 6 million children (a report can include multiple children). The United States has one of the worst records among industrialized nations – losing on average between four and seven children every day to child abuse and neglect. 1, 2 14% of all men in prison and 36% of women in prison in the USA were abused as children, about twice the frequency seen in the general population. 7Children who experience child abuse & neglect are about 9 times more likely to become involved in criminal activity. 5Top ↑ Abused children are 25% more likely to experience teen pregnancy. 5Abused teens are more likely to engage in sexual risk taking, putting them at greater risk for STDs. 5Top ↑ 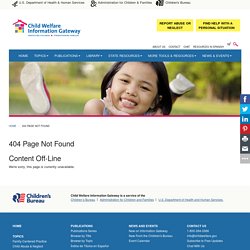 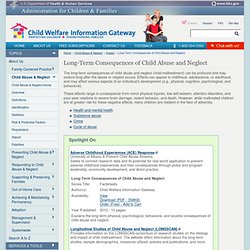 Effects can appear in childhood, adolescence, or adulthood, and may affect various aspects of an individual's development (e.g., physical, cognitive, psychological, and behavioral). These effects range in consequence from minor physical injuries, low self-esteem, attention disorders, and poor peer relations to severe brain damage, violent behavior, and death. However, while maltreated children are at greater risk for these negative effects, many children are resilient in the face of adversity.

Spotlight On Adverse Childhood Experiences (ACE) Response University of Albany & Prevent Child Abuse America Seeks to connect research data and its potential for real-world application to prevent adverse childhood experiences and their consequences through policy and program leadership, community development, and direct practice. 1299.pdf.  - The Future of Children - While knowing how many children are abused and neglected is critical to policy development, understanding the factors that contribute to maltreatment and that shape its consequences for children is crucial to the development of prevention and treatment approaches.

For instance, the likelihood that an individual child will experience abuse or neglect may be influenced by characteristics of the parent or caregiver, the family's socioeconomic situation, or the child. Caregiver characteristics such as psychological impairment, experience of child abuse or domestic violence, and attitudes toward parenting contribute directly to the occurrence of maltreatment. Caregiver Characteristics A wide variety of characteristics of the child's parents or caregivers have been linked to an increased likelihood of child abuse or neglect. Domestic violence involving the child's caregiver is a problem that is more likely to contribute to physical abuse than neglect. Child abuse and neglect are still prevalent in America. “If our American way of life fails the child, it fails us all.” This statement, by author and activist Pearl S.

Photographer Captures Bizarre Reality Of Toy Production In 'Real Toy Story' Dig into your old toy chest and you're bound to find an adorable bounty of baby dolls, teddy bears and the occasional rubber ducky. So, if you don't want to forever taint your memories of these darling childhood mementos, we recommend you look away now. Photographer Michael Wolf's series "Real Toy Story" delves inside Hong Kong's toy making factories, exposing the mass production and consumption embedded in the lives of your cuddliest childhood companions. Have You Ever Tried to Sell a Diamond? - Edward Jay Epstein. De Beers proved to be the most successful cartel arrangement in the annals of modern commerce. While other commodities, such as gold, silver, copper, rubber, and grains, fluctuated wildly in response to economic conditions, diamonds have continued, with few exceptions, to advance upward in price every year since the Depression.

Indeed, the cartel seemed so superbly in control of prices -- and unassailable -- that, in the late 1970s, even speculators began buying diamonds as a guard against the vagaries of inflation and recession. The diamond invention is far more than a monopoly for fixing diamond prices; it is a mechanism for converting tiny crystals of carbon into universally recognized tokens of wealth, power, and romance. To achieve this goal, De Beers had to control demand as well as supply. Both women and men had to be made to perceive diamonds not as marketable precious stones but as an inseparable part of courtship and married life.

How Poverty Taxes the Brain - Emily Badger. Poverty Quick Facts. US poverty to hit highest level since 1965. The High Cost of Care. For the first time in our history, we are devoting the entire feature section of the magazine to a single story by one writer: a powerful examination of America's health care costs. The 24,105-word story, reported and written by Steve Brill, inverts the standard question of who should pay for health care and asks instead, Why are we paying so much? Why do we spend nearly 20% of our gross domestic product on health care, twice as much as most other developed countries, which get the same or better health outcomes? Why, Brill asks, does America spend more on health care than the next 10 highest-spending countries combined?

Ohio Bank Forecloses On Wrong Home, Sells Owner Katie Barnett's Belongings. States see more poverty among children, unemployed. States saw little relief from poverty in the past year, especially among children, the unemployed and those in the lowest income brackets. The latest Census figures show that 17 states had increases in the number of people living in poverty between 2010 and 2011. Causes of Poverty. Poverty, Unemployment, Enriching the Few: The 2008 Economic Crisis and the Restructuring of Class Relations in America.