Bono: The good news on poverty (Yes, there's good news) Sir Fazle Hasan Abed Left His Corporate Life To Bring Help (And Hope) To The World's Poorest : Goats and Soda. Sir Fazle Hasan Abed quit his job at Shell Oil more than 40 years ago to focus on helping the ultra-poor, like these women in a village in Bangladesh. 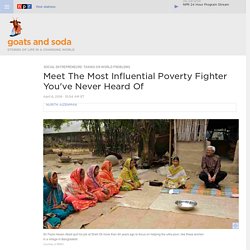 Courtesy of BRAC hide caption toggle caption Courtesy of BRAC Sir Fazle Hasan Abed quit his job at Shell Oil more than 40 years ago to focus on helping the ultra-poor, like these women in a village in Bangladesh. Courtesy of BRAC He's a Bangladeshi who's been knighted by the Queen of England. We took the occasion to find out more about what he's learned during his 40 years in the field — and how one of his ideas might end up driving the 21st century global effort to eradicate extreme poverty. Today BRAC is one of the world's largest anti-poverty NGOs — with 115,000 employees in 12 countries offering some 138 million people services including education, micro-loans, job training and health care.

A cyclone had just hit Bangladesh — then still known as East Pakistan — killing more than 300,000 and leaving many more homeless. A Family's Money Situation Can Affect Children's Health. Kelly Brooks/Getty Images/Illustration Works A single question asked at an annual checkup — whether parents have trouble making ends meet — could help pediatricians identify children at risk for serious health problems associated with poverty and the chronic levels of stress that often accompany it. 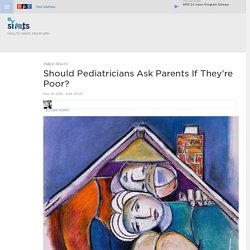 The American Academy of Pediatrics urges members to ask if their patients' families are struggling financially and then commit to helping them get the resources they need to thrive. And some communities are trying to make that happen. Since almost half of young children in the United States live in poverty or near poverty, it's no small challenge. The Center for Youth Wellness, located in San Francisco's low-income Bayview Hunters Point neighborhood, is working with the pediatricians' organization on a national campaign, Children Can Thrive, to raise awareness about the impact of a range of childhood stressors, known as adverse childhood experiences, or ACEs. 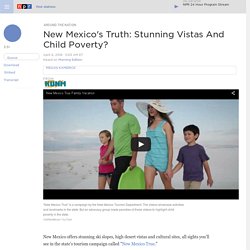 The videos showcase activities and landmarks in the state. But an advocacy group made parodies of these videos to highlight child poverty in the state. VisitNewMexico YouTube New Mexico offers stunning ski slopes, high desert vistas and cultural sites, all sights you'll see in the state's tourism campaign called "New Mexico True. " But the state also has the highest child poverty rate in the nation — a truth that an advocacy group highlighted with its parody campaign, "New Mexico Truth. " In the original video, you can see footage of children making strands of chili peppers and frolicking at the White Sands National Monument.

"This is New Mexico, where we celebrate our unique cuisine and turn a blind eye to our hungry children. What Does Poverty Look Like? A Photo Contest Has Surprising Answers : Goats and Soda. Asgar Mia turns scrap metal into finished steel in Bangladesh. 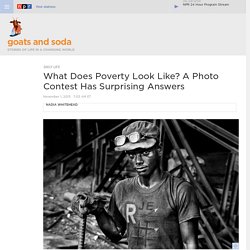 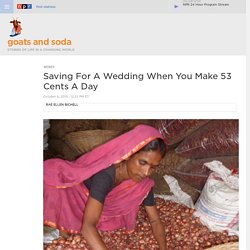 Stuart Rutherford hide caption toggle caption Stuart Rutherford Kamala Rani sorts vegetables at the market in Kapasia, Bangladesh. Stuart Rutherford The thought of paying for her daughters' weddings has haunted Kamala Rani for years. This might seem like peanuts to an American audience used to hearing about weddings costing tens of thousands. Last month, the United Nations approved a plan aimed at wiping out poverty. Quiz: How Much Do You Know About Global Development Goals? : Goats and Soda. Who's Still Poor? Who's Made It To Middle Income? Pew Has New Data : Goats and Soda. Over the last decade, economic growth lifted almost a billion people around the world out of extreme poverty. 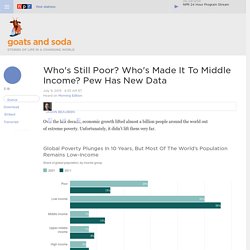 Unfortunately, it didn't lift them very far. A rising economic tide has been concentrated in just a few regions of the world, and it's failed to raise many people into the middle class. By U.S. standards, most of the world remains terribly poor. "If we look at the income distribution of the world population, the vast majority is living [on] $2 to $4 per day," says Rakesh Kochhar, associate director of research and economist at the Pew Research Center. How Surgery Can Fight Global Poverty. EARLIER this year in Madagascar, a man in his 60s named Sambany made international news after volunteer surgeons from Mercy Ships removed a 16-pound tumor from his face. 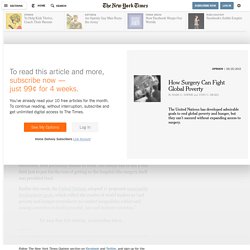 For decades, he had sought treatment at 10 hospitals, most of which lacked surgeons. He was ostracized, then physically unable to work. His family had to sell a rice field just to pay for the cost of getting to the hospital (the surgery itself was provided free). Earlier this week, the adopted 17 proposed sustainable development goals, which reflect the resolve of world leaders to “end poverty and hunger everywhere; to combat inequalities within and among countries; to build peaceful, just and inclusive societies.” Is it possible to end global poverty? Later this year, the UN is expected to adopt the World Bank's ambitious target of ending extreme poverty by 2030. 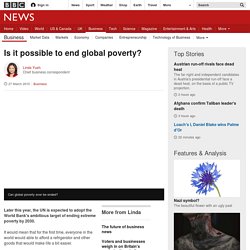 It would mean that for the first time, everyone in the world would able to afford a refrigerator and other goods that would make life a bit easier. But, what would it take? Could we really see the end of poverty within a generation? First, there's been a great deal of progress already. The poverty rate in the developing world has more than halved since 1981.

In terms of the UN's Millennium Development Goals, it meant that the target of halving poverty by 2015 from 1990 levels was achieved five years early. But, it was due largely to China. 10 Photos that Tell The Real Story of Poverty Around the World. World Poverty - Our World In Data.