Historian Says Don't 'Sanitize' How Our Government Created The Ghettos 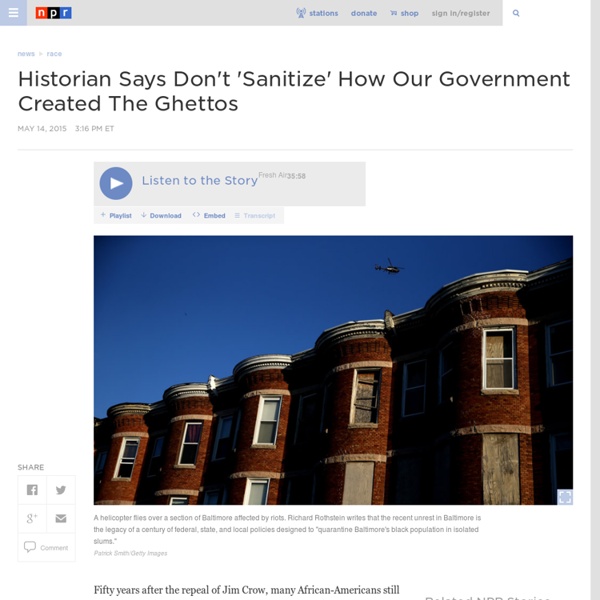 glogin?mobile=1&URI= We don’t yet know who agreed to pay $179.4 million for a Picasso in an auction Monday night — or where the money came from, or what motivated that person or persons to spend more than anyone has before for a single piece of art at auction. But this much we do know: The astronomical rise in prices for the most-sought-after works of art over the last generation is in large part the story of rising global inequality. At its core, this is the simplest of economic math. The supply of paintings or Giacometti sculptures (one of which sold for $141 million in the same auction this week) is fixed. But the number of people with the will and the resources to buy top-end art is rising, thanks to the distribution of extreme wealth. How far were the Military Orders responsible for the results of the Third Crusade? By Jacob Deacon Although failing in its ultimate aim to recapture Jerusalem the Third Crusade still met with several successes. With Cyprus, Acre, and Tyre under Christian control there existed `a series of genuine bridgeheads` with the potential to greatly benefit future Crusades.[1] Furthermore, when one also considers the death of Saladin shortly after the expedition, it is likely that the Third Crusade made a tremendous contribution to the immediate survival of the Crusader States.[2] In order to assess how responsible the Military Orders were for the results of the Third Crusade this article will be structured by the analysis of three key areas in which they played a part; the siege of Acre, the march to Jaffa and their other military contributions, and their role as councillors to King Richard I of England. However the Military Orders, the Templars in particular, also met with several setbacks during the siege. Bibliography Primary Sources

Who Gets Food Stamps? White People, Mostly WASHINGTON — Gene Alday, a Republican member of the Mississippi state legislature, apologized last week for telling a reporter that all the African-Americans in his hometown of Walls, Mississippi, are unemployed and on food stamps. “I come from a town where all the blacks are getting food stamps and what I call ‘welfare crazy checks,’” Alday said to a reporter for The Clarion-Ledger, a Mississippi newspaper, earlier this month. “They don’t work.”

Five Medieval Chronicles that you can read translated online Page from the Nuremberg Chronicle We have come across many translated medieval sources through our online wanderings. Most medievalists will know about the larger databases of texts, such as the Internet Medieval Sourcebook and De Re Militari. However, there are a lot of sources that are not widely known, including these five chronicles from the Middle Ages. Cassiodorus’ Chronicle Cassiodorus, the 6th-century Roman statesman and administrator for the Ostrogothic Kingdom, is also considered to be one of the most important writers of the early Middle Ages.

It's socialism for the rich and capitalism for the rest of us in Britain Socialism lives in Britain, but only for the rich: the rules of capitalism are for the rest of us. The ideology of the modern establishment, of course, abhors the state. The state is framed as an obstacle to innovation, a destroyer of initiative, a block that needs to be chipped away to allow free enterprise to flourish. "I think that smaller-scale governments, more freedom for business to exist and to operate – that is the right kind of direction for me," says Simon Walker, the head of the Institute of Directors. Shedding Light on Dark Legends: The True Story of the Inquisition - Those Catholic Men Inc. As members of a 2,000 year old church, we often find ourselves apologizing for mistakes of the past. For example, how often do we find ourselves apologizing for the Inquisition? Don’t worry, we want to say, we’re not like that anymore. We see the inquisitors as awkward uncles at family reunions; we distance ourselves from them. We accept the story told to us by those who do not always have the Church’s best interest in mind. When confronted with accusations about the Inquisition, we acquiesce.

20 Things the Poor Do Every Day That the Rich Never Have to Worry About This post first appeared on Ben Irwin's blog. Financial advisor and evangelical Christian Dave Ramsey probably wasn’t expecting this much pushback when he shared a piece contrasting the habits of the rich with those of the poor. In her response on CNN, Rachel Held Evans noted that Ramsey and Corley mistake correlation for causality when they suggest (without actually proving) that these habits are the cause of a person’s financial situation. (Did it never occur to them that it might be the other way around?)

A medieval attitude to suicide I had always thought that suicide was made illegal in medieval times due to religious disapproval until suicidal people were finally freed from the risk of prosecution by the 1961 Suicide Act. It turns out the history is a little more nuanced, as noted in this 1904 article from the Columbia Law Review entitled “Is Suicide Murder?” that explores the rather convoluted legal approach to suicide in centuries past. In the UK, the legal status of suicide was first mentioned in a landmark 13th Century legal document attributed to Henry de Bracton.

5 Confirmed False Flag Operations and How to Spot Them in the Future (ANTIMEDIA Op-Ed) The concept of the “false flag” operation has become almost prohibitively stigmatized in recent years because of the 9/11 “truther” movement and the emotional fallout from the tragedies at Sandy Hook, Aurora, Boston and others. In spite of being labeled “conspiracy theories,” real, verifiable false flag events have taken place in the past. Such examples serve to dismantle the notion that false flags are meritless conspiracy theories and can help destigmatize the concept itself, providing the diagnostic lens needed to identify false flags when they arise.

The best way to nab your dream job out of college? Be born rich The American dream of equal opportunity, based on the conviction that intelligence, hard work and character are the keys to success, may be on life support. These days children raised at the top or bottom fifths of the income pyramid tend to stay there, even as adults. Higher education is considered a major contributor to economic success. An Ancient Device Too Advanced to Be Real Gives Up Its Secrets at Last Though it it seemed to be just a corroded lump of some sort when it was found in a shipwreck off the coast of Greece near Antikythera in 1900, in 1902 archaeologist Valerios Stais, looking at the gear embedded in it, guessed that what we now call the “Antikythera mechanism” was some kind of astronomy-based clock. He was in the minority—most agreed that something so sophisticated must have entered the wreck long after its other 2,000-year-old artifacts. Nothing like it was believed to have existed until 1,500 years later. In 1951, British historian Derek J. de Solla Price began studying the find, and by 1974 he had worked out that it was, in fact, a device from 150 to 100 BC Greece. He realized it used meshing bronze gears connected to a crank to move hands on the device’s face in accordance with the Metonic cycle, the 235-month pattern that ancient astronomers used to predict eclipses.