Oh great. Now the housing crisis can't be solved. And the tech folks are afra... Until the evictions stop, protests on the streets will continue By Tim Redmond NOVEMBER 20, 2014 – You know the housing crisis in San Francisco has gone from insane to absurd when the City Planning Department gets in trouble for posting a video saying we need more housing – and the Atlantic suggests that maybe there’s no solution at all. 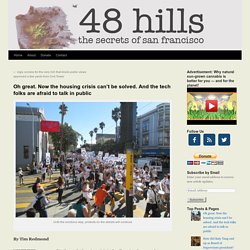 How San Francisco sold a majority stake to tech. Boom and Bust and What Comes Next. By Celia and Peter Wiley The view from our window. 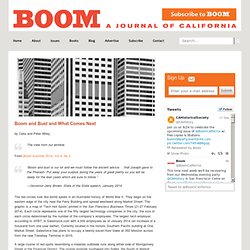 From Boom Summer 2014, Vol 4, No 2 “Boom and bust is our lot and we must follow the ancient advice. . .that Joseph gave to the Pharaoh: Put away your surplus during the years of great plenty so you will be ready for the lean years which are sure to follow.” —Governor Jerry Brown, State of the State speech, January 2014 The red circles look like bomb splats in an illustrated history of World War II. A large cluster of red spots resembling a measles outbreak runs along either side of Montgomery Street in the Financial District.

How This Bay Area Tech Boom's Different From The Last One : All Tech Considered. A Mobile Website That Makes Food Stamp Applications A Snap. In today's lopsided economy, nearly 15% of American households struggle with providing food for their families, and the number of working households receiving food stamps alone has more than tripled over the last decade. 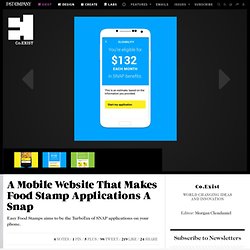 But for the people whose paychecks don't add up enough to feed the kids, or for those struggling to find work, the Supplemental Nutrition Assistance Program (SNAP) application process itself--often a long and inscrutable document--can sometimes make seeking aid difficult, too. Slogging through bureaucratic paperwork doesn't seem like a task for a smartphone at first. But when Jimmy Chen walks me through Easy Food Stamps, his mobile website that functions something like a TurboTax for SNAP applications, using a smartphone middleman to translate terms like "deemor expenses" into plain English begins to make a lot more sense. A world built for the rich. It's very much obvious for anyone following public discourse in economics that Thomas Piketty's best-seller Capital in the Twenty-first Century has brought the problem of inequality to the forefront, with mixed results. 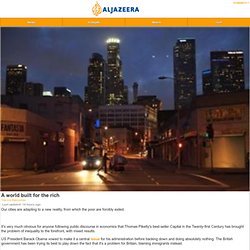 US President Barack Obama vowed to make it a central issue for his administration before backing down and doing absolutely nothing. The British government has been trying its best to play down the fact that it's a problem for Britain, blaming immigrants instead. They ignore the plethora of evidence offered by, among others, the Office of National Statistics, which revealed in May that the wealthiest 10 percent of households in the UK own 44 percent of the country's total aggregate household wealth while the least wealthy half own just nine percent.

Can Oakland Avoid Tech Conflicts as Startups Move In? Impact Hub Oakland, a new downtown tech-centric co-working and event space. (Sam Harnett/KQED) The start-up scene has spilled over from San Francisco into Oakland. The blog Live Work Oakland has created a map showing where all these new tech companies are popping up in the city. Solving the housing crisis takes all San Franciscans, even big tech. By Joseph Tobener OPINION This week, San Franciscans learned that they will not be able to rely on Sacramento to fix the housing crisis. 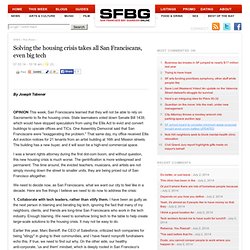 State lawmakers voted down Senate Bill 1439, which would have stopped speculators from using the Ellis Act to evict and convert buildings to upscale offices and TICs. One Assembly Democrat said that San Franciscans were "exaggerating the problem. " That same day, my office received Ellis Act eviction notices for 21 tenants from an artist building at 16th and Mission streets. Ron Conway And Chamath Palihapitiya Debate SF Housing And Google At Next Big ... Venture capitalists Ron Conway and Chamath Palihapitiya got caught up in a shouting match toward the end of one session on inequality at the Bloomberg Next Big Thing Conference in Sausalito, Calif., today. 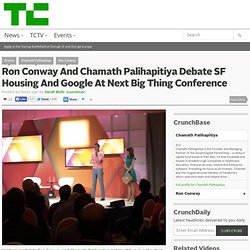 In an answer to what he would do if he were Mayor Ed Lee, Palihapitiya said he’d resign. That was the last straw for Conway, who’d been waving his hand for comment for the last 10 minutes of the session. Conway is a close friend of Ed Lee and was a major backer of the San Francisco Mayor’s election campaign, dropping $275,000 to help pass Prop E, which lowered the business tax for tech companies in SF. Conway finally erupted and launched into Palihapitiya, calling him out on his idea for contributing employee equity to the city and also about ridiculing Marc Benioff earlier, defending Benioff’s charitable contributions to the city. “They’re working to make it a better city and so is Mayor Ed Lee, and it is going to get better, not worse,” yelled Conway.

The Bleaching of San Francisco: Extreme Gentrification and Suburbanized Poverty in the Bay Area. Protesters block a Facebook bus at intersection of San Francisco's Market and 8th Streets and show unfair system of private tech buses. 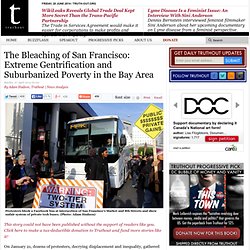 (Photo: Adam Hudson) This story could not have been published without the support of readers like you. Click here to make a tax-deductible donation to Truthout and fund more stories like it! On January 21, dozens of protesters, decrying displacement and inequality, gathered near City Hall in San Francisco on a chilly Tuesday morning. The Anti-Eviction Pledge. Twitter Tax Break: The Backstory of a Controversial Deal. San Francisco Mayor Ed Lee and other city leaders stood on the third floor of a charity called St. 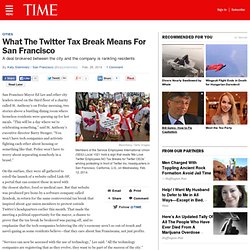 Anthony’s on Friday morning, two stories above a bustling dining room where homeless residents were queuing up for hot meals. “This will be a day where we’re celebrating something,” said St. Anthony’s executive director Barry Stenger. “You won’t have tech companies and activists fighting each other about housing or something like that. The Key To Helping San Francisco's Homeless: Cellphones. You won't find "cellphone" listed within Maslow's hierarchy of needs, but the device is certainly making a case for inclusion. 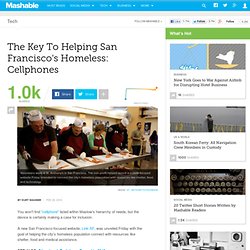 A new San Francisco-focused website, Link-SF, was unveiled Friday with the goal of helping the city's homeless population connect with resources like shelter, food and medical assistance. The idea for a website alone isn't necessarily groundbreaking, but the intended use case is. Site creators built the service specifically for mobile phones, which have become an important tool in the everyday lives of America's homeless population, too, says Kenshiro Nakagawa, a software engineer at Zendesk who helped develop the site.

Zendesk partnered with Gray Area Foundation for the Arts and St. San Francisco's untouchables. Rebecca@sfbg.com In one sense, San Francisco's homeless residents have never been more visible than they are in this moment in the city's history, marked by rapid construction, accelerated gentrification, and rising income inequality. 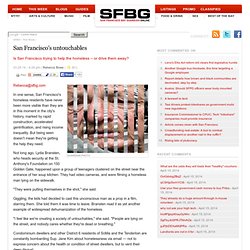 But being seen doesn't mean they're getting the help they need. Not long ago, Lydia Bransten, who heads security at the St. Homeless In San Francisco? There’s An App For That. It's HERE AND NOW. Homeless men and women in San Francisco have a new way of finding services like food and shelter. There's an app for that. It links them to available housing, a place to bathe or use a computer. How Homeless People Use Technology. Social media gives the homeless in S.F. a helping hand. Until recently, Alana was one of hundreds of disabled and elderly people living on the streets of San Francisco.

When her wheelchair was stolen, Alana couldn’t move from her sleeping spot. We-need-a-one-city-approach-in-San-Francisco-5399544. When tech companies and social service organizations met recently at City Hall, we expected the meeting to expose some of the tensions we had been reading about in the press - you know the story: corporate shuttle buses attacked, millionaires' homes targeted while thousands of hard-working city dwellers struggle to find affordable housing. But the truth is we have much more in common than not. For example, one attendee said she relied upon the services of the Boys & Girls Club when, after high school, she found herself homeless. Today she is the vice president of engineering for a San Francisco tech company.

Another argued that we could use our world-class skills in data analysis to better understand, and help solve, the problem. This was not the argument of a data scientist, but of the leader of a large social service organization. The meeting produced no silver-bullet solutions.