A crisis is at hand: only voting green will do. Caroline Lucas elected as the first Green MP in the UK Parliament, 2010. 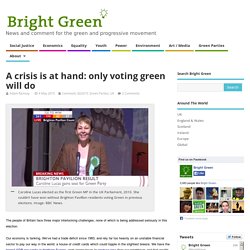 She couldn’t have won without Brighton Pavillion residents voting Green in previous elections. Image: BBC News. The people of Britain face three major interlocking challenges, none of which is being addressed seriously in this election. Our economy is tanking. We’ve had a trade deficit since 1983, and rely far too heavily on an unstable financial sector to pay our way in the world: a house of credit cards which could topple in the slightest breeze. Perhaps most interestingly of all, we are utterly deluded about this: almost no British person believes me when I tell them that we are poorer than Ireland. The fiction that we are doing well is built on our houses getting more and more expensive. Britain’s economic woes are long term and entwined with those of the world.

Even in its own terms, this race to the bottom has failed. And these are our problems now. There is another way to put all of this. I could go on. Notes. Solar-Powered Inflatable Light. The Write Spot - Timeline Photos. As winter approaches, UK worries about energy poverty. With energy bills for the average UK resident rising dramatically this summer, politicians and citizens alike have been looking ahead toward the winter months with growing apprehension. 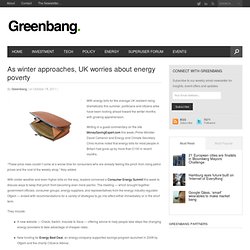 Writing in a guest commentary on the site MoneySavingExpert.com this week, Prime Minister David Cameron and Energy and Climate Secretary Chris Huhne noted that energy bills for most people in Britain had gone up by more than £100 in recent months. “These price rises couldn’t come at a worse time for consumers who are already feeling the pinch from rising petrol prices and the cost of the weekly shop,” they added. With colder weather and even higher bills on the way, leaders convened a Consumer Energy Summit this week to discuss ways to keep that pinch from becoming even more painful. They include: According to Ofgem, only 15 percent of households switched gas supplier in 2010 and just 17 percent switched electricity suppliers. Tackling fuel poverty during the transition to a low-carbon economy. Paul Ekins and Matthew Lockwood 27 October 2011. 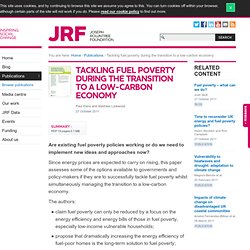 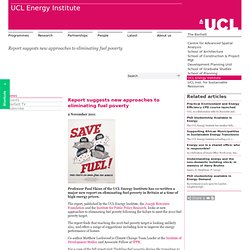 The report, published by the UCL Energy Institute, the Joseph Rowntree Foundation and the Institute for Public Policy Research, looks at new approaches to eliminating fuel poverty following the failure to meet the 2010 fuel poverty target. The report finds that reaching the 2016 fuel poverty target is looking unlikely also, and offers a range of suggestions including how to improve the energy performance of homes. Co-author Matthew Lockwood is Climate Change Team Leader at the Institute of Development Studies and Associate Fellow at IPPR. For a copy of the full report visit 'Tackling fuel poverty during the transition to a low carbon economy' visit the Joseph Rowntree Foundation website or email Ellie Jones. Fuel poverty – time for a new approach? New Internationalist.

By 2030, as many as 900 million people will still have no electricity. 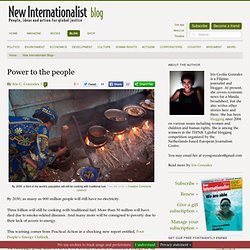 Three billion will still be cooking with traditional fuel. More than 30 million will have died due to smoke-related diseases. Energy Poverty - energypedia.info. Definition by Douglas F. 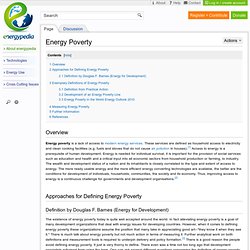 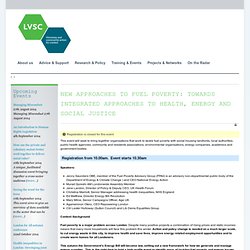 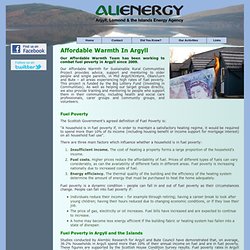 Our Affordable Warmth for Sustainable Rural Communities Project provides advice, support and mentoring to older people and single parents, in Mid Argyll/Kintyre, Oban/Lorn and Bute – all areas experiencing high rates of fuel poverty. This project is funded by the Big Lottery Fund (Investing in Communities). As well as helping our target groups directly, we also provide training and mentoring to people who support them in their community, including health and social care professionals, carer groups and community groups, and volunteers.