Memes -- blaming the poor. PTSD & Poverty. Rent Seeking. The Reality of Food Stamps. The War on the Poor. 150 000 000 lazy or 400 gready? There Is No American Meritocracy As Long As People Are Naming Their Kids Truffles. Peter Neiger shared a great little piece by Nicholas Kristof in the NYT yesterday, The Compassion Gap. 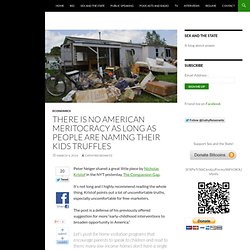 It’s not long and I highly recommend reading the whole thing. Kristof points out a lot of uncomfortable truths, especially uncomfortable for free-marketers. The post is a defense of his previously offered suggestion for more “early-childhood interventions to broaden opportunity in America.” Let’s push for home visitation programs that encourage parents to speak to children and read to them; many low-income homes don’t have a single kid’s book. We also need initiatives to reduce exposure to lead and other toxins.

It’s tough to know what Kristof means when he says “push,” but a lot of free-marketers hear, “legislate.” But how do they react to such a suggestion? Pretty fucking much. The free market is supposed to reward those who perform well and punish those who don’t. How, in the face of all this inequality of opportunity, can we still believe in meritocratic outcomes? This, too, is wrong. Robert Reich: David Brooks is full of it. Occasionally David Brooks, who personifies the oxymoron “conservative thinker” better than anyone I know, displays such profound ignorance that a rejoinder is necessary lest his illogic permanently pollute public debate. 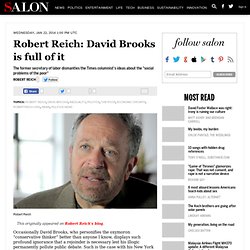 Such is the case with his New York Times column last Friday, arguing that we should be focusing on the “interrelated social problems of the poor” rather than on inequality, and that the two are fundamentally distinct. Baloney. First, when almost all the gains from growth go to the top, as they have for the last thirty years, the middle class doesn’t have the purchasing power necessary for buoyant growth. Once the middle class has exhausted all its coping mechanisms – wives and mothers surging into paid work (as they did in the 1970s and 1980s), longer working hours (which characterized the 1990s), and deep indebtedness (2002 to 2008) – the inevitable result is fewer jobs and slow growth, as we continue to experience.

Hogwash. Wal-Mart has a lower acceptance rate than Harvard. This year's Ivy League admissions totals are in. 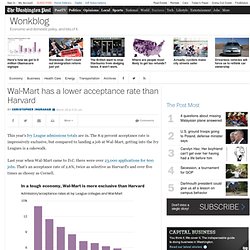 The 8.9 percent acceptance rate is impressively exclusive, but compared to landing a job at Wal-Mart, getting into the Ivy Leagues is a cakewalk. Last year when Wal-Mart came to D.C. there were over 23,000 applications for 600 jobs. That's an acceptance rate of 2.6%, twice as selective as Harvard's and over five times as choosy as Cornell. This isn't an anomaly - last year a Wegman's in Pennsylvania boasted an acceptance rate of 5%, while Google only has room for one half of one percent of its job applicants. Parents and students - particularly those from a certain socio-economic background - tend to obsess a lot over the college admissions process.

When Capitalism Fails, a Job Should Still Be a Right. (Photo: Lance Page / t r u t h o u t; Adapted: daliborlev, Kenneth Hynek)It's easier to get into Harvard than Walmart. 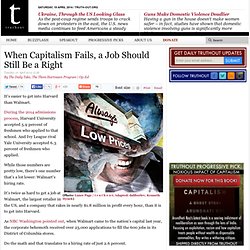 During the 2014 admissions process, Harvard University accepted 5.9 percent of freshmen who applied to that school. And Ivy League rival Yale University accepted 6.3 percent of freshmen who applied. While those numbers are pretty low, there's one number that's a lot lower: Walmart's hiring rate. It's twice as hard to get a job at Walmart, the largest retailer in the US, and a company that rakes in nearly $1.8 million in profit every hour, than it is to get into Harvard. As NBC Washington pointed out, when Walmart came to the nation's capital last year, the corporate behemoth received over 23,000 applications to fill the 600 jobs in its District of Columbia stores.

Do the math and that translates to a hiring rate of just 2.6 percent. It's time for that to change. Under the New Deal, the Public Works Administration was one of many agencies he created. Most recently, George W. Blaming the Victum.