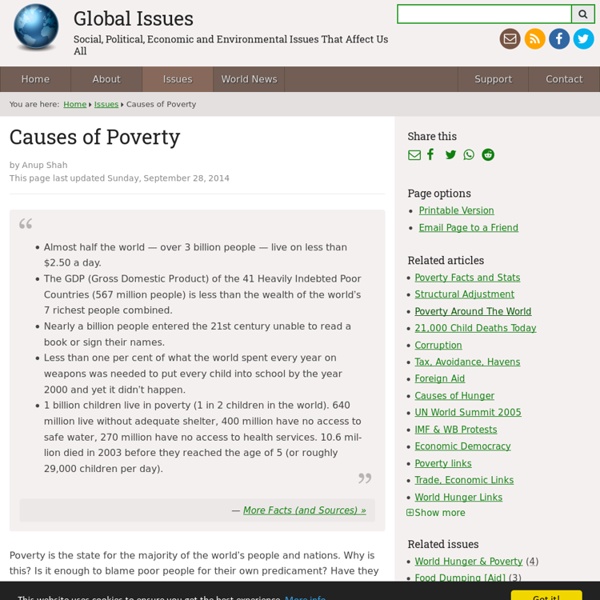 Author and Page information by Anup ShahThis Page Last Updated Sunday, September 28, 2014 Almost half the world — over 3 billion people — live on less than $2.50 a day.The GDP (Gross Domestic Product) of the 41 Heavily Indebted Poor Countries (567 million people) is less than the wealth of the world’s 7 richest people combined.Nearly a billion people entered the 21st century unable to read a book or sign their names.Less than one per cent of what the world spent every year on weapons was needed to put every child into school by the year 2000 and yet it didn’t happen.1 billion children live in poverty (1 in 2 children in the world). 640 million live without adequate shelter, 400 million have no access to safe water, 270 million have no access to health services. 10.6 million died in 2003 before they reached the age of 5 (or roughly 29,000 children per day). Poverty is the state for the majority of the world’s people and nations. Why is this? Poverty Facts and Stats Poverty Around The World

Related:  Poverty in the US • Poverty

What is Poverty? | what is poverty? | millennium development goals | measuring poverty | responding to poverty | sources | What does it mean to be poor? How is poverty measured? Third World countries are often described as “developing” while the First World, industrialized nations are often “developed”. What does it mean to describe a nation as “developing”? The High Cost of Care For the first time in our history, we are devoting the entire feature section of the magazine to a single story by one writer: a powerful examination of America's health care costs. The 24,105-word story, reported and written by Steve Brill, inverts the standard question of who should pay for health care and asks instead, Why are we paying so much? Why do we spend nearly 20% of our gross domestic product on health care, twice as much as most other developed countries, which get the same or better health outcomes? Why, Brill asks, does America spend more on health care than the next 10 highest-spending countries combined? One answer is that health care is a seller's market and we're all buyers--buyers with little knowledge and no ability to negotiate. It's a $2.8 trillion market, but it's not a free one.

Poverty Poverty is general scarcity or dearth, or the state of one who lacks a certain amount of material possessions or money.[1] Absolute poverty or destitution refers to the deprivation of basic human needs, which commonly includes food, water, sanitation, clothing, shelter, health care and education. Relative poverty is defined contextually as economic inequality in the location or society in which people live.[2][3] After the industrial revolution, mass production in factories made production goods increasingly less expensive and more accessible. Of more importance is the modernization of agriculture, such as fertilizers, to provide enough yield to feed the population.[4] The supply of basic needs can be restricted by constraints on government services such as corruption, tax avoidance, debt and loan conditionalities and by the brain drain of health care and educational professionals. Etymology The English word "poverty" via Anglo-Norman povert.

Ohio loses 18K jobs in three month period, new BLS report shows - Columbus Government COLUMBUS, Ohio (CGE) - New Republican Gov. John Kasich promised voters that if they elected him, he could "move the needle" on jobs rather quickly. From the start to the end of last year's race for governor pitting former Congressman Kasich against incumbent Democratic Gov. Ted Strickland, elected in the wave election of 2006, the Kasich camp mocked Strickland for losing over 400,000 jobs during his four-year term, that had the misfortune of roughly coinciding with the Little Depression, as some economists call the Great Recession the nation and Ohio succumbed to when the meltdown on Wall Street melted down Main Street, too. Gov.

Poverty Progress The American Recovery and Reinvestment Act included broad investments to alleviate the poverty made worse by economic crisis. Guiding Principles President Obama has been a lifelong advocate for the poor. As a young college graduate, he rejected the high salaries of corporate America and moved to the South Side of Chicago to work as a community organizer. Poverty Facts and Stats This figure is based on purchasing power parity (PPP), which basically suggests that prices of goods in countries tend to equate under floating exchange rates and therefore people would be able to purchase the same quantity of goods in any country for a given sum of money. That is, the notion that a dollar should buy the same amount in all countries. Hence if a poor person in a poor country living on a dollar a day moved to the U.S. with no changes to their income, they would still be living on a dollar a day. The new poverty line of $1.25 a day was recently announced by the World Bank (in 2008). For many years before that it had been $1 a day.

EdX Justice For questions on course lectures, homework, tools, or materials for this course, post in the course discussion forum. Have general questions about edX? You can find lots of helpful information in the edX FAQ. Have a question about something specific? You can contact the edX general support team directly: Causes of Poverty As of July 1, 2013 ThinkQuest has been discontinued. We would like to thank everyone for being a part of the ThinkQuest global community: Students - For your limitless creativity and innovation, which inspires us all. Teachers - For your passion in guiding students on their quest. [Infographic] Combating Mass Incarceration - The Facts June 17, 2011 The war on drugs has helped make the U.S. the world's largest incarcerator. America’s criminal justice system should keep communities safe, treat people fairly, and use fiscal resources wisely. But more Americans are deprived of their liberty than ever before - unfairly and unnecessarily, with no benefit to public safety. Especially in the face of economic crisis, our government should invest in alternatives to incarceration and make prisons options of last – not first – resort.

Solutions to World Poverty Solutions to World Poverty, a look at the basic answers. The possible solutions for poverty clearly depend on what is chiefly causing it, and this can clearly vary with time and with place. At this early 21st century time the main poverty differences are between majority poverty as in poorer countries like India, and minority poverty in rich countries like the USA and Britain. National Poverty Center How does the United States measure poverty? The United States determines the official poverty rate using poverty thresholds that are issued each year by the Census Bureau. The thresholds represent the annual amount of cash income minimally required to support families of various sizes. The methodology for calculating the thresholds was established in the mid-1960s and has not changed in the intervening years.