Volunteer for Free in Africa. Racists, you’re stupid. Racists, I’m sick and tired of the stupidity you show in your haste to incite hatred against those who don’t fit your notion of ‘pure Maltese blood’. 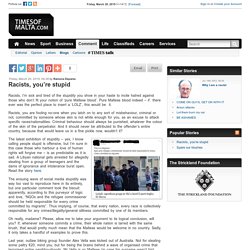 Pure Maltese blood indeed – if there ever was the perfect place to insert a ‘LOLZ’, this would be it. Racists, you are fooling no-one when you latch on to any sort of misbehaviour, criminal or not, committed by someone whose skin is not white enough for you, as an excuse to attack specific races/nationalities. Criminal behaviour should always be punished, whatever the colour of the skin of the perpetrator. And it should never be attributed to the offender’s entire country, because that would leave us in a fine pickle now, wouldn’t it?

The latest exhibition of stupidity – yes, I know calling people stupid is offensive, but I’m sure in this case those who harbour a love of human rights will forgive me – is as predictable as it is sad. Oh really, madame? Last year, outlaw biking group founder Alex Vella was kicked out of Australia. 28 Reasons why South Africa should be on your Bucket ListThe Planet D: Adventure Travel Blog. One of our favourite things about travel to South Africa was the variety. 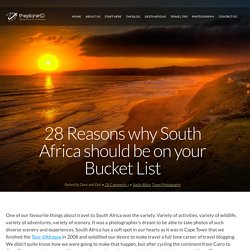 Variety of activities, variety of wildlife, variety of adventures, variety of scenery. It was a photographer’s dream to be able to take photos of such diverse scenery and experiences. South Africa has a soft spot in our hearts as it was in Cape Town that we finished the Tour d’Afrique in 2008 and solidified our desire to make travel a full time career of travel blogging. We didn’t quite know how we were going to make that happen, but after cycling the continent from Cairo to Cape Town over the course of four months, we knew that we could never go back to our old lives.

Thus ThePlanetD was born. There’s still so much more to explore in the country and we cycled the entire West Coast and drove most of the East. The Penguins of Simon’s Town, South Africa The eyes of gentle giant. Table Mountain in Cape Town, South Africa The King of the Savannah at Kariega Game Reserve in South Africa. A big yawn form a hippo in St. Four Women Making a Difference in Their Communities… And You Can Help Too! 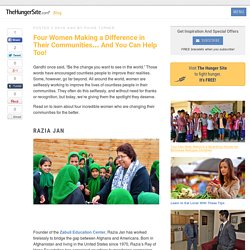 Those words have encouraged countless people to improve their realities. Some, however, go far beyond. All around the world, women are selflessly working to improve the lives of countless people in their communities. Read on to learn about four incredible women who are changing their communities for the better. Advertisement Founder of the Zabuli Education Center, Razia Jan has worked tirelessly to bridge the gap between Afghans and Americans. In Deh’Subz Afghanistan, Razia’s Ray of Hope Foundation runs the Zabuli Education Center, a girls’ school which is helping to repair years of damage done by the Taliban when they outlawed education for girls and women in 1996.

You can be a part of Razia’s efforts to educate girls in Afghanistan. Paige Turner writes prose,novels, blog posts, petitions,and, sometimes, haiku. Poverty. Relative poverty is a term used on the news to mean people who have less money than those living around them. 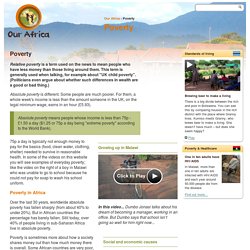 This term is generally used when talking, for example about "UK child poverty". (Politicians even argue about whether such differences in wealth are a good or bad thing.) Absolute poverty is different. Some people are much poorer. For them, a whole week's income is less than the amount someone in the UK, on the legal minimum wage, earns in an hour (£5.93). Absolute poverty means people whose income is less than 75p - £1.50 a day ($1.25 or 75p a day being "extreme poverty" according to the World Bank). Growing up in Malawi In this video... 75p a day is typically not enough money to pay for the basics (food, clean water, clothing, shelter) needed to survive in reasonable health. Poverty in Africa Social and economic causes. Volunteer Africa Blog: 15 Top Tips on Volunteering in Chintsa, South Africa. Volunteer co-ordinator Katie asked last seasons ISV Group Volunteers to put together a list of top tips for this seasons volunteers...we've picked out the 15 best tips to share with you! 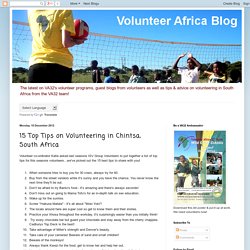 When someone tries to buy you for 30 cows, always try for 60.Buy from the street vendors while it's sunny and you have the chance. You never know the next time they'll be out.Don't be afraid to try Bantu's food - it's amazing and there's always seconds! Don't miss out on going to Mama Tofu's for an in-depth talk on sex education.Wake up for the sunrise.Screw "Hakuna Matata" - it's all about "Molo Yolo"! The locals around here are super cool so get to know them and their stories.Practice your Xhosa throughout the workday, it's surprisingly easier than you initially think! Try every chocolate bar but guard your chocolate and stay away from the cherry chappies.