Rogue landlords making life unbearable for tenants, says Shelter. More than 125,000 people privately renting homes in England have suffered abusive behaviour from landlords in the last year, according to Shelter. 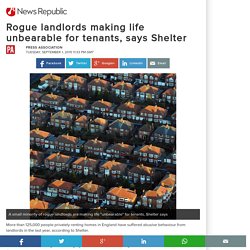 The housing charity is warning that a small minority of rogue landlords are making life "unbearable" for tenants, with some seeing their belongings burned and others having utilities cut off in efforts to intimidate them. Shelter said that in the last year, almost 17,000 people have called its helpline about problems with a landlord. The charity highlighted the case of a man named Chris, who said a rented flat where he lived with his wife had damp and a leaking roof. Chris said his landlord failed to carry out some repairs and started entering his home without permission. The-cost-of-school-holidays.pdf. Labour’s four leadership contenders show contrasting views on disability benefits. When poor people can’t get on due to lack of public transport. England divided. New research shows: England is now more divided than 1980s • 60% increase in number of poor households and 33% increase in wealthy households between 1980 and 2010 • Households in the middle are disappearing, with biggest changes in London New analysis of Census data by the University of Oxford, funded by independent charity Trust for London, shows England has experienced significant changes in the composition of its households during the three decades running from 1980-2010. 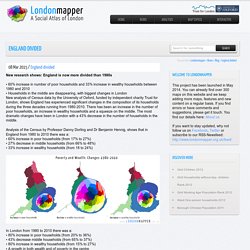 Imagine if all the foodbanks in the UK closed tomorrow. 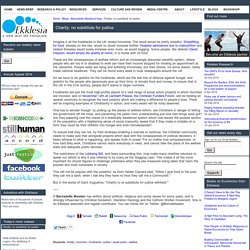 The result would be pretty dreadful. Shoplifting for food, already on the rise, would no doubt increase further. Hospital admissions due to malnutrition and related illnesses would surely increase even more, as would begging. Some people, like diabetic David Clapson, would simply die quietly at home, in a house with no food. These are the consequences of welfare reform and an increasingly draconian benefits system, where people who are too ill or disabled to work can have their income stopped for missing an appointment at the Jobcentre. Tories under fire for not targeting child poverty - UK Politics - UK - The Independent. The Government’s watchdog on poverty estimates that the number of children growing up in poor families will rise from 2.6m to 3.5m in 2020 – the date by which the three main political parties have pledged to eradicate it. 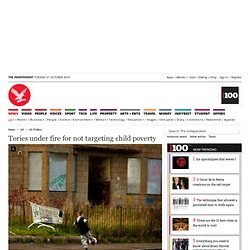 However, the Commission on Social Mobility and Child Poverty believes the rise will be even greater because the 3.5m estimate does not take account of the further austerity measures planned after next May’s general election. That means it could be over 4m by 2020. The Tories have pledged to freeze most working age benefits, including tax credits, for two years from 2016 but that would contribute only £3.2bn towards their £12bn planned welfare cuts. Alan Milburn, the commission chairman, appealed to all three main Westminster parties to be more honest with the voters by admitting the 2020 target for ending child poverty would be missed and to replace it with a set of more realistic goals. Rural poverty: when the food bank is only 20 miles away... Long way for a food parcel: A man walks across snow-covered fields on the North Yorkshire moors. Photograph: Anna Gowthorpe/PA As the Archbishop of York, John Sentamu, suggested in a powerful speech this week, the "new and terrible blight" of food poverty in the UK is not the sole preserve of gritty urban neighbourhoods.

He highlighted his own neck of the woods, North Yorkshire, the home of rolling dales and affluent, pretty market towns, as a case in point. Sentamu referred in passing to a recent survey of food poverty in the area. It is well worth a read. Gathering data from a range of local agencies - children's centres, citizen's advice bureau, churches and homeless charities - the report, published by Harrogate and Ripon Centres for Voluntary Service, identified the biggest food poverty problem in North Yorkshire as "unhealthy eating". Families in poverty were consuming nutritionally-poor food such as takeaways and frozen food because healthier options were to expensive it found. The harsh lives of the forgotten rural poor. A green and pleasant land, unless you're caught in the trap of rural poverty. 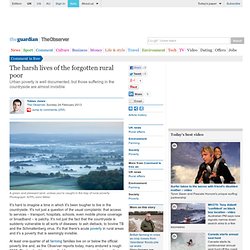 Photograph: NTPL/John Miller It's hard to imagine a time in which it's been tougher to live in the countryside. It's not just a question of the usual complaints: that access to services – transport, hospitals, schools, even mobile phone coverage or broadband – is patchy. It's not just the fact that the countryside is suddenly vulnerable to all sorts of diseases: to ash dieback, to bovine TB and the Schmallenberg virus. When did being lowly paid become a criminal offence? Inside Amazon's flagship factory in Rugeley, Staffordshire, a new way of working is evolving. 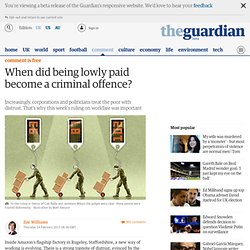 There is a strong topnote of distrust, evinced by the full-body scanners that workers have to pass, every time they leave, to prove they haven't stolen anything. Child poverty ‘should be tackled not measured’ Why aren't we more outraged about child poverty? In a hall in East London, the Reverend Giles Fraser, formerly of St Paul’s Cathedral and now of St Mary’s, Newington, has a question for a small group of local teenagers, all aged around 15 or 16. 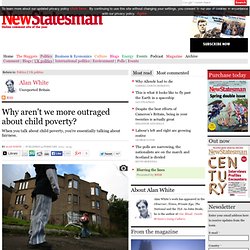 “Fifty-two per cent of children in this borough live in poverty. What do you think is the average salary of people who work here?” He asks. The guesses range from £10,000 to £18,000. “All wrong,” he replies. Fraser’s been asked by the local council to find out what local children think is fair and unfair about the borough. . - They think that when they put their address on their CV, it makes potential employers less likely to consider them, and that’s not fair.

Listening to troubled families - Publications. Language is a weapon used to make ‘others’ of people in poverty. Are we being tough on people in poverty and not looking closely enough at its causes? 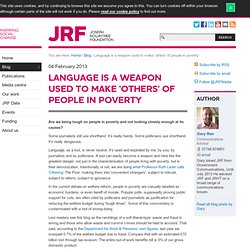