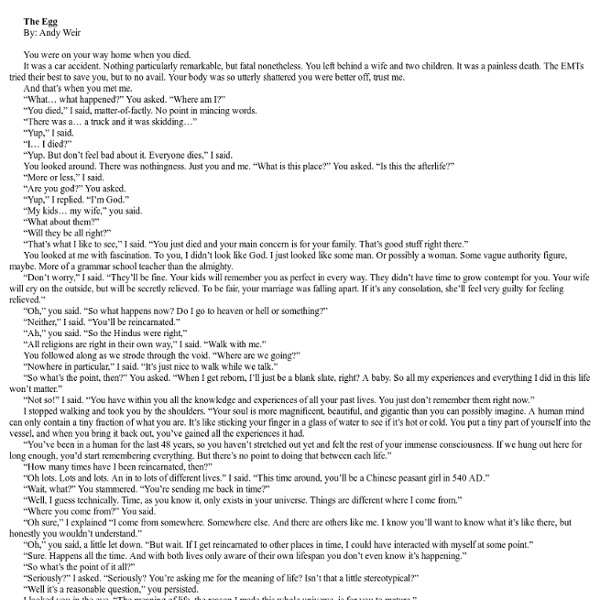 The Egg By: Andy Weir You were on your way home when you died. It was a car accident. Nothing particularly remarkable, but fatal nonetheless. You left behind a wife and two children. And that’s when you met me. “What… what happened?” “You died,” I said, matter-of-factly. “There was a… a truck and it was skidding…” “Yup,” I said. “I… I died?” “Yup. You looked around. “More or less,” I said. “Are you god?” “Yup,” I replied. “My kids… my wife,” you said. “What about them?” “Will they be all right?” “That’s what I like to see,” I said. You looked at me with fascination. “Don’t worry,” I said. “Oh,” you said. “Neither,” I said. “Ah,” you said. “All religions are right in their own way,” I said. You followed along as we strode through the void. “Nowhere in particular,” I said. “So what’s the point, then?” “Not so!” I stopped walking and took you by the shoulders. “You’ve been in a human for the last 48 years, so you haven’t stretched out yet and felt the rest of your immense consciousness. “Oh lots.

10 More Enigmas That Defy Explanation Mysteries What is it about the bizarre and mysterious that piques our curiosity? It entertains our sense of wonder and excites our imagination, for sure. 10 simple ways to save yourself from messing up your life Stop taking so much notice of how you feel. How you feel is how you feel. It’ll pass soon. What you’re thinking is what you’re thinking. It’ll go too. Poem Starters and Creative Writing Ideas Enter your e-mail to get the e-book for FREE. We'll also keep you informed about interesting website news. "I have searched the web and used different worksheets, but none have come close to your worksheets and descriptions of (what to do and what not to do). Both courses I have taken have with Creative Writing Now have been amazing. 10 More Common Faults in Human Thought Humans This list is a follow up to Top 10 Common Faults in Human Thought. Thanks for everyone’s comments and feedback; you have inspired this second list! It is amazing that with all these biases, people are able to actually have a rational thought every now and then. There is no end to the mistakes we make when we process information, so here are 10 more common errors to be aware of.

Stuff No One Told Me Pictures Artist Alex Noriega has lived a fascinating life. The Barcelona-born designer currently lives in Mozambique, and he has learned some hard lessons in between. As he writes on his blog "Stuff No One Told Me": "At some point in 2010 I was going through some crisis at work, so I decided to start this blog as a way of trying to find what I was doing wrong. I wanted to put on paper all that I had learned as simple as possible and try to see if what was happening around me made sense. It didn't." 10 Creepy Mysteries You Haven't Heard Of Mysteries We have had numerous mystery lists in the past, but, due to a recent question I asked on the Listverse fanpage on facebook, I decided to put together a new one. This list covers mysteries that are, hopefully, not well known to most of you (but including one previously published item with updated information), and ones that have something creepy about them.

Awakening As One 'Revelations' (FULL MOVIE) Last updated on January 30, 2010 at 9:00 am EDT by in5d Alternative News * Visit in5D Connection where you can find your soul mate or join one of our amazing groups. EVERYONE is welcome! 'Revelations' reveals the dangers prevalent within today's rising 'spiritual' and New Age Movements, as we, ourselves have been humbled to experience from the crest of the rising wave. To date, 'Revelations' is a piece that is most dear to our hearts as it reflects the lessons that have come from the trials and challenges of our own journey of Awakening. We have said before that "the time has come", and that "the revolution has begun".

troubling.info Eight rules for writing fiction: 1. Use the time of a total stranger in such a way that he or she will not feel the time was wasted. 2. 5 Psychological Experiments That Prove Humanity is Doomed Cracked.com's new book is now on sale. What follows is one of 22 classic articles that appear in the book, along with 18 new articles that you can't read anywhere else. Psychologists know you have to be careful when you go poking around the human mind because you're never sure what you'll find there. A number of psychological experiments over the years have yielded terrifying conclusions about the subjects.

The Solway Firth Photo, 1964,(Spaceman) UFO Casebook Files On 24th May 1964, Jim Templeton, a fireman from Carlisle in the North of England, took his young daughter out to the marches overlooking the Solway Firth to take some photographs. Nothing untoward happened, although both he and his wife noticed an unusual aura in the atmosphere. There was a kind of electric charge in the air, though no storm came. Even nearby cows seemed upset by it. Some days later Mr Templeton got his photographs processed by the chemist, who said that it was a pity that the man who had walked past had spoilt the best shot of Elizabeth holding a bunch of flowers.

Generic Love Some years ago I was having dinner with my girlfriend, Liz; among other items on my plate was a heaping mound of mashed potatoes. When Liz noticed I had finished eating all of my potatoes, she instantly ladled another scoop onto my plate, without asking. She had done this before, and I felt I needed to say something: "Please don't automatically give me more food without checking first to see if I want more."