Bruce Lipton - 'The Power Of Consciousness' - Interview by Iain McNay 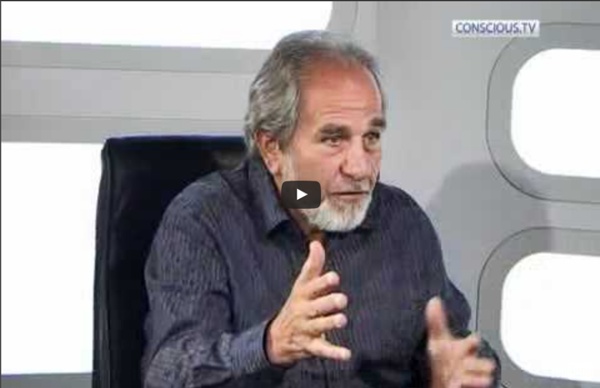 EXTRAIT DU LIVRE "La biologie des croyances Nous avançons à grands pas grâce à la physique quantique. Ce livre révèle les découvertes majeures en la matière, et qui vont changer considérablement notre vision du monde. Livre biologie des croyances. Dr. Bruce Lipton: The Biology of Belief - Where Mind and Matter Meet A radically new understanding is unfolding at the leading edge of science: Dr. Lipton's profoundly hopeful synthesis of the latest and best research in cell biology and quantum physics is being hailed as a major breakthrough showing that our bodies can be changed as we retrain our thinking. “You can live a life of fear or live a life of love. You have the choice! But I can tell you that if you choose to see a world full of love, your body will respond by growing in health. If you choose to believe that you live in a dark world full of fear, your body’s health will be compromised as you physiologically close yourself down in a protection response.” — Dr.

Bruce H. Lipton (Author of The Biology of Belief) Bruce H. Lipton, PhD is an internationally recognized leader in bridging science and spirit. He has been a guest speaker on hundreds of TV and radio shows, as well as keynote presenter for national and international conferences. Dr. Lipton began his scientific career as a cell biologist. Watch Free Documentary Online The Trouble with Atheism is an hour-long documentary on atheism, presented by Rod Liddle. It aired on Channel 4 in December 2006. The documentary focuses on criticizing atheism, as well as science, for its perceived similarities to religion, as well as arrogance and intolerance. The programme includes interviews with a number of prominent scientists, including atheists Richard Dawkins and Peter Atkins and Anglican priest John Polkinghorne. It also includes an interview with Ellen Johnson, the president of American Atheists. Liddle begins the documentary by surveying common criticisms of religion, and particularly antireligious arguments based on the prevalence of religious violence.

The World is Your Petri Dish with Bruce Lipton - #336 Bruce H. Lipton, Ph.D., is an internationally recognized leader in new biology. His pioneering research on cloned stem cells presaged the revolutionary field of epigenetics, the new science of how environment and perception control genes. Bruce served on the faculty of the University of Wisconsin’s School of Medicine and later performed groundbreaking research at Stanford University’s School of Medicine. He is the bestselling author of The Biology of Belief, The Honeymoon Effect, and co-author with Steve Bhaerman of Spontaneous Evolution. On today’s episode of Bulletproof Radio, Bruce and Dave talk about the evolution of epigenetics, cell membranes, research funding, the power of positive thoughts, physical and energy realms, life before DNA and more.

Films For Action Just imagine what could become possible if an entire city had seen just one of the documentaries above. Just imagine what would be possible if everyone in the country was aware of how unhealthy the mainstream media was for our future and started turning to independent sources in droves. Creating a better world really does start with an informed citizenry, and there's lots of subject matter to cover. The Biology of Belief: Unleashing the Power of Consciousness, Matter & Miracles This new updated and expanded 10th anniversary edition of The Biology of Belief will forever change how you think about your own thinking. Stunning new scientific discoveries about the biochemical effects of the brain’s functioning show that all the cells of your body are affected by your thoughts. Bruce H.

Bruce Lipton - The Biology of Belief : theshowpodcast.com Bruce Lipton - The Biology of Belief (Radio Interviews) - Cells and Identity - February 9, 2005 - Biology, Belief and Consciousness - May 14, 2005 - Genes, Cells & Belief - December 19, 2005 Bruce Lipton - Cells and Identity (February 9, 2005) "We are not automatons to our genes," enthused scientist and lecturer, Dr. Bruce Lipton, who shared his concepts in the field of new biology. We all contain a "metropolis of 50 trillion citizens,"âthe cells in our body, which could each be considered sentient beings in their own right, yet they act together as a community, he stated.