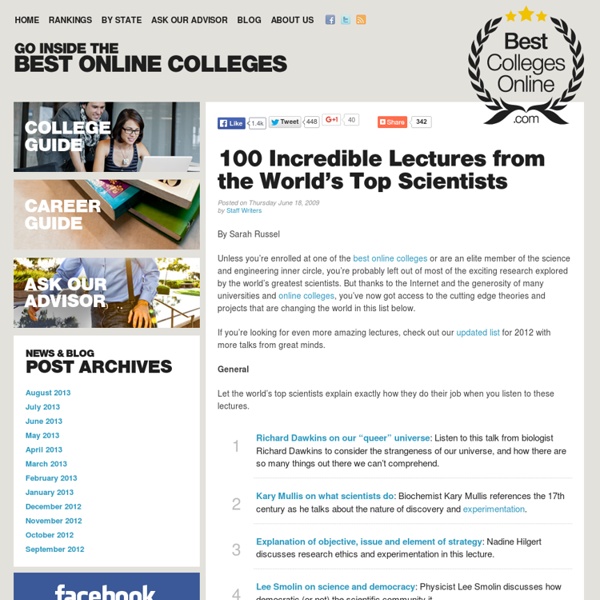 Posted on Thursday June 18, 2009 by Staff Writers By Sarah Russel Unless you’re enrolled at one of the best online colleges or are an elite member of the science and engineering inner circle, you’re probably left out of most of the exciting research explored by the world’s greatest scientists. But thanks to the Internet and the generosity of many universities and online colleges, you’ve now got access to the cutting edge theories and projects that are changing the world in this list below. If you’re looking for even more amazing lectures, check out our updated list for 2012 with more talks from great minds. General Let the world’s top scientists explain exactly how they do their job when you listen to these lectures. Science and Engineering From materials science to the study of thermodynamics, learn more about the science of engineering here. WTC Lecture – collapse of WTC Buildings: Steven E. Biology and Medicine Chemistry Physics and Astronomy Earth and Environment Technology Science and Business

10 TED Talks Perfect For the eLearning Industry Does eLearning kill creativity? Bring on the eLearning revolution! What do you believe about open-source learning? What eLearning developers can learn from kids? Would you teach at the 100,000 student classroom? What have you learned from online education? 8 math talks to blow your mind Mathematics gets down to work in these talks, breathing life and logic into everyday problems. Prepare for math puzzlers both solved and unsolvable, and even some still waiting for solutions. Ron Eglash: The fractals at the heart of African designs When Ron Eglash first saw an aerial photo of an African village, he couldn’t rest until he knew — were the fractals in the layout of the village a coincidence, or were the forces of mathematics and culture colliding in unexpected ways?

UC Berkeley Summer Reading 2006 The World Is Flat: A Brief History of the Twenty-first CenturyThomas L. FriedmanNew York: Farrar, Straus and Giroux, 2005 Although the message can be boiled down into fewer pages, a future President should understand that technology has created the opportunity for anyone in the world to perform tasks that used to be limited by geography. It sounds good for the world; is it good for the U.S.? We are the leader in offshoring.

Six Things Education Can Learn From Neuroscience Neuroscience studies a very complex system: the brain. Much has been learned through formal research of the brain, especially due to the advent of brain imaging technologies which afford increased breadth of research using human subjects. That said, what we know remains very limited, given the complexities of both the organ and the practical application of research findings. However, we can point to six findings that give us new and profound insight into our grey matter. Atomic Goal - 800 Years of Power From Waste Matthew Ryan Williams for The New York Times Ted Ellis of TerraPower working on a fuel system. Matthew Ryan Williams for The New York Times Ash Odedra, wearing glasses, the principal design engineer at TerraPower in Bellevue, Wash., a company that is being led by Bill Gates and Nathan Myhrvold, a fellow Microsoft billionaire. The quest is for a new kind of nuclear reactor that would be fueled by today’s nuclear waste, supply all the electricity in the United States for the next 800 years and, possibly, cut the risk of nuclear weapons proliferation around the world.

10 More Common Faults in Human Thought Humans This list is a follow up to Top 10 Common Faults in Human Thought. Thanks for everyone’s comments and feedback; you have inspired this second list! It is amazing that with all these biases, people are able to actually have a rational thought every now and then. There is no end to the mistakes we make when we process information, so here are 10 more common errors to be aware of. How Digital Detectives Deciphered Stuxnet, the Most Menacing Malware in History It was January 2010, and investigators with the International Atomic Energy Agency had just completed an inspection at the uranium enrichment plant outside Natanz in central Iran, when they realized that something was off within the cascade rooms where thousands of centrifuges were enriching uranium. Natanz technicians in white lab coats, gloves and blue booties were scurrying in and out of the “clean” cascade rooms, hauling out unwieldy centrifuges one by one, each sheathed in shiny silver cylindrical casings. Any time workers at the plant decommissioned damaged or otherwise unusable centrifuges, they were required to line them up for IAEA inspection to verify that no radioactive material was being smuggled out in the devices before they were removed. The technicians had been doing so now for more than a month. "We were not immune to the fact that there was a bigger geopolitical picture going on.

33 Digital Tools for Advancing Formative Assessment in the Classroom I came across a great blog post the other day – Formative Assessments Are Easier Than You Think – that told the firsthand account of a teacher, Steven Anderson, who implemented formative assessment in his classroom. He used a sticky-note version of an exit ticket to elicit evidence of student learning and in his words, “what a difference that made.” Formative assessment is ‘easier than you think’ and with all the digital tools and apps now available for mobile devices it’s even easier.