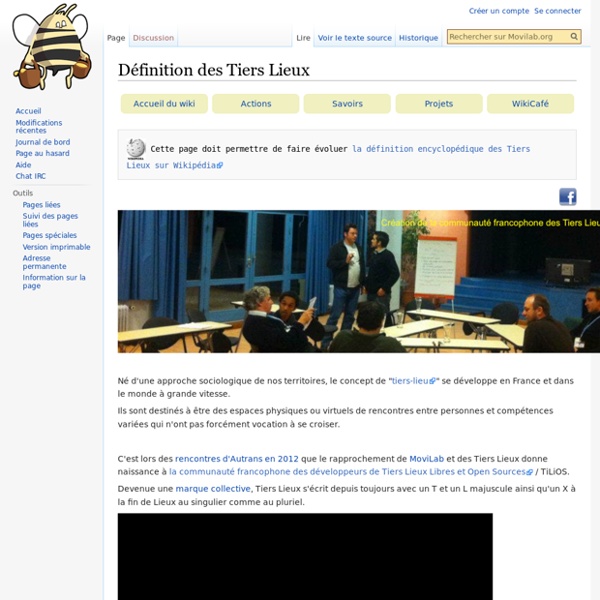 At this company everybody’s a boss, and nobody’s a boss! My column from the Nashua Telegraph, January 18, 2012 – At Morning Star, Everybody’s a Boss, and Nobody’s a Boss I have never had the pleasure of working in a large organization with lots of managers. Now that I think of it, I have really never had a boss. NavLab présenté par NavLab - un FabLab nautique communautaire The project The NavLab meet the need of the population to better understand daily objects, whether it is to be able to repair, modify or even build them. To this "consumer" dimension, the NavLab adds a "maritime" specialization, with the objective of helping projects connected to the sea and its environment. At the NavLab, you will find a set of services and tools to help you, wether you are a professional, an amateur hobbyist, or a regular "do-it-yourselfer", to realize all sorts of projects. The Workshop The activity center of the NavLab is the Workshop, a meeting place where all ideas start.

ARCHITECTES, COWORKING, ESPACES EN RÉSEAUX /////////////////////PHOTO CI-DESSUS: La Nave, espace de coworking à Madrid/////////////////////“SPACE MATTERS”Space matters. It represents a prominent aspect of humanity’s existential nature – as the primordial basis of architecture and a basic prerequisite for our exploration of our world. Our entire lives are literally embedded in space. We are constantly surrounded, affected and shaped by it – whether consciously perceived or unconsciously experienced. Food waste reduction could help feed world's starving 2 July 2014Last updated at 19:02 ET By Caroline Hepker BBC World Business Report One third of all food produced is wasted, the UN estimates "If food was as expensive as a Ferrari, we would polish it and look after it." Instead, we waste staggering amounts. So says Professor Per Pinstrup-Andersen, head of an independent panel of experts advising the UN's Food and Agricultural Organization on how to tackle the problem.

Nook Architects move into co-working space in Barcelona Pods built from yellow chipboard and glass provide meeting spots inside this co-working office in Barcelona, created by local studio Nook Architects in the city's Poblenou district (+ slideshow). Nook Architects joined forces with another local business to create the Zamness co-working office space, which is set within a 1970s building in a former industrial area of the city. It serves as the studio's new permanent base, but there is also desk space that can be rented out to local companies for both long-term use and one-off events. To provide pockets of privacy and quiet within the transitory workspace, the architects inserted a pair of enclosed meeting spaces. Each metal-framed pod has a pitched roof, with opaque yellow chipboard walls and panels of transparent glass that frame views of the office. "These volumes were originally thought of as rectangular boxes with flat roofs – the minimum structure for a meeting room," explained the architects.

First, Let's Fire All the Managers Management is the least efficient activity in your organization. Think of the countless hours that team leaders, department heads, and vice presidents devote to supervising the work of others. Most managers are hardworking; the problem doesn’t lie with them. Worker-Owned Cooperatives: Direct Democracy in Action (Photo: Marjie Kennedy / Flickr)Flashpoints—those unexpected events that movements gather around, when everything is accelerated, exciting, and energizing—fizzle. Whether they fail to gain traction, or splinter off to catalyze multiple new efforts, movement events serve an important function: they are short­lived and inspiring. At the same time, they are moments of immense opportunity when we can make strides and pool our collective power. The cooperative movement is experiencing a string of these moments now, and is burgeoning with renewed activity. I see this first­hand as a co­-owner of the Toolbox for Education and Social Action (TESA), a worker­-owned cooperative that participates in many co­op networks.

Macao: chronicle of an occupation Walking hastily past Formigoni's Pirellone bis building, many suddenly had an amusing thought: are the Lavoratori dell'arte completely mad? Could this be Macao? The group continued along Via Galvani towards Milan's central station but then, just after crossing Via Gioia, their thought became a certainty: they are mad!