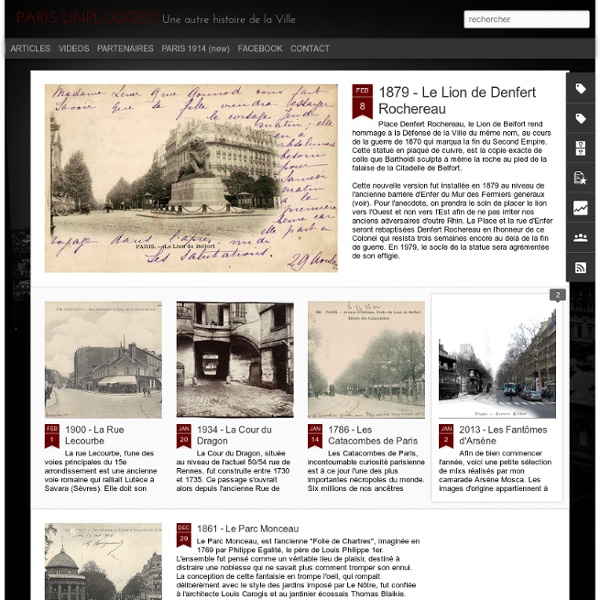 Teaching teachers to use blended-learning education technology. Stolk/Thinkstock It seems a waste. Millions of educational apps, millions of lesson plans available online, millions of laptops in the hands of students. Stuff Parisians Like Nouvel article sur notre blog “Stuff Parisians Like” Il concerne le mot décalé!! All French people agree that Parisians are not normal people. Provinciaux deem that Parisians are below normal, usually beyond repair. Parisians on the other hand know full well that they navigate far beyond the norm. Such a striking opposition lies in the very definition each have of “the norm”. Want to Improve Your Attention? Wear a White Coat The power of ‘enclothed cognition’: how what you wear affects how you think. It’s surprising how much simple movements of the body can affect the way we think. Using expansive gestures with open limbs makes us feel more powerful, crossing your arms makes you more persistent and lying down can bring more insights (read more here: 10 Simple Postures That Boost Performance). So if moving the body can have these effects, what about the clothes we wear? We’re all well aware of how dressing up in different ways can make us feel more attractive, sporty or professional, depending on the outfit, but can the clothes you wear actually change cognitive performance or is it just a feeling? Adam and Galinsky (2012) tested the effect of simply wearing a white lab coat on people’s powers of attention.

The NSA’s SKYNET program may be killing thousands of innocent people In 2014, the former director of both the CIA and NSA proclaimed that "we kill people based on metadata." Now, a new examination of previously published Snowden documents suggests that many of those people may have been innocent. Last year, The Intercept published documents detailing the NSA's SKYNET programme. According to the documents, SKYNET engages in mass surveillance of Pakistan's mobile phone network, and then uses a machine learning algorithm on the cellular network metadata of 55 million people to try and rate each person's likelihood of being a terrorist. Patrick Ball—a data scientist and the director of research at the Human Rights Data Analysis Group—who has previously given expert testimony before war crimes tribunals, described the NSA's methods as "ridiculously optimistic" and "completely bullshit." A flaw in how the NSA trains SKYNET's machine learning algorithm to analyse cellular metadata, Ball told Ars, makes the results scientifically unsound.

Doh! Dept: The $40-Million Elbow You might have seen “Le Rêve,” Picasso’s 1932 portrait of his mistress, Marie-Thérèse Walter, in your college art-history textbook. The painting is owned by Steve Wynn, the casino magnate and collector of masterpieces. He acquired it in a private sale in 2001 from an anonymous collector, who had bought it at auction in 1997 for $48.4 million. 7,000 APIs: Twice as Many as This Time Last Year The ProgrammableWeb directory has hit lucky API number 7,000. It’s been a short three months since 6,000 APIs, as the API universe continues to expand rapidly. How rapidly? In the last year we added almost as many APIs as were added to the entire directory over the six years prior. As we look over the trends, there are things you’d expect, like the continued growth in social.

Wasabi Uses[edit] Wasabi is generally sold either as a root which is very finely grated before use, as dried powder in large quantities, or as a ready-to-use paste in tubes similar to travel toothpaste tubes.[4] In some high-end restaurants, the paste is prepared when the customer orders, and is made using a grater to grate the root; once the paste is prepared, it loses flavour in 15 minutes if left uncovered.[5] In sushi preparation, sushi chefs usually put the wasabi between the fish and the rice because covering wasabi until served preserves its flavor. Fresh wasabi leaves can be eaten, having the spicy flavor of wasabi roots. Because the burning sensations of wasabi are not oil-based, they are short-lived compared to the effects of chili peppers, and are washed away with more food or liquid. The sensation is felt primarily in the nasal passage and can be quite painful depending on the amount consumed. Surrogates[edit]

The myth of the eight-hour sleep Image copyright Other We often worry about lying awake in the middle of the night - but it could be good for you. A growing body of evidence from both science and history suggests that the eight-hour sleep may be unnatural. In the early 1990s, psychiatrist Thomas Wehr conducted an experiment in which a group of people were plunged into darkness for 14 hours every day for a month. It took some time for their sleep to regulate but by the fourth week the subjects had settled into a very distinct sleeping pattern.