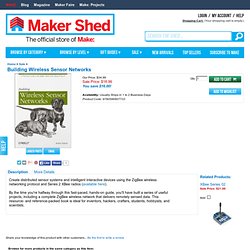 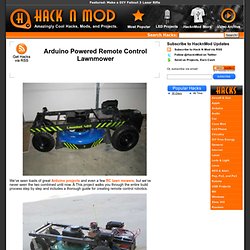 Â This project walks you through the entire build process step by step and includes a thorough guide for creating remote control robotics. You can read the entire build tutorial to perhaps create your own robotic servant. Top 40 Arduino Projects of the Web. Freaklabs - Open Source Wireless - Weatherproof Wireless Enclosure Build Tutorial. Hi all. No, I haven't been dead these past few weeks. I've actually been spending a lot of my free time researching how to build a weatherproof enclosure for the rice farm sensing project in the Tokyo Hackerspace.

I've mentioned it previously and the project takes place in Kamogawa which is about an hour and a half outside of Tokyo. The place is a complete contrast to Tokyo and has problems with monkeys, boars, poisonous snakes, and some nasty bugs. Overall, quite interesting, although I am a bit scared of poisonous snakes. Anyways, we'll be going out there this weekend to check out the terrain and I thought it might be good to bring out a prototype of what I have in mind for the outdoor sensor network project. The real difficulty in keeping anything outdoors for extended periods of time is how to ruggedize it to withstand the elements. Twine : Listen to your world, talk to the Internet by Supermechanical. The Kickstarter is over, but if you missed out on backing us, not to worry. 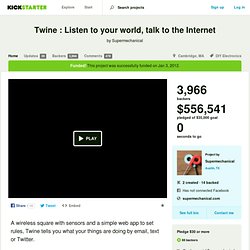 You can still join the thousands of other awesome Twine owners by pre-ordering on Supermechanical. It's the next best thing to being an original backer! Follow us on Facebook or Twitter. Want to hook up things to the Web? Arduino Buying Guide. Arduino Buying Guide Let’s face it, there are a a lot of different Arduino boards out there. 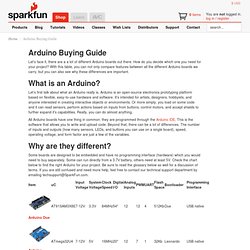 How do you decide which one you need for your project? With this table, you can not only compare features between all the different Arduino boards we carry, but you can also see why these differences are important. What is an Arduino? Let’s first talk about what an Arduino really is. All Arduino boards have one thing in common: they are programmed through the Arduino IDE. GSM/GPRS Module - SM5100B. Shigeru's Geiger Counter - News. By Emcee Grady | March 29, 2011 | 20 comments These past few weeks, the world's eyes have been closely monitoring the situation in Japan. 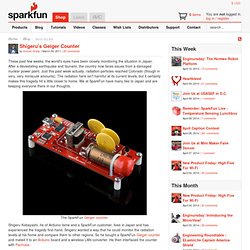 After a devastating earthquake and tsunami, the country now faces issues from a damaged nuclear power plant. Just this past week actually, radiation particles reached Colorado (though in very, very miniscule amounts). The radiation here isn't harmful at its current levels, but it certainly makes this tragedy hit a little closer to home. We at SparkFun have many ties to Japan and are keeping everyone there in our thoughts. The SparkFun Geiger counter. Search Results. Freaklabs - Open Source Wireless - Home. Electronic Components & Supplies. A Brief Rant on the Future of Interaction Design. So, here's a Vision Of The Future that's popular right now. 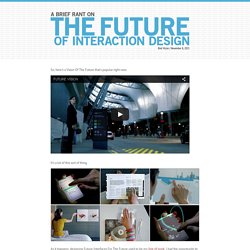 It's a lot of this sort of thing. As it happens, designing Future Interfaces For The Future used to be my line of work. I had the opportunity to design with real working prototypes, not green screens and After Effects, so there certainly are some interactions in the video which I'm a little skeptical of, given that I've actually tried them and the animators presumably haven't. In praise of impractical programming. Although it’s become a cultural mainstay now, I still remember when I first saw that thick book — the one with the wizard on the cover — about a school for magic where wonders are easily conjured by those who know the proper spells. 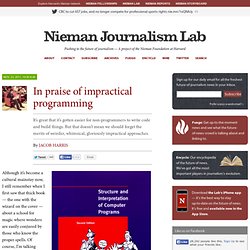 Of course, I’m talking about the Structure and Interpretation of Computer Programs. There was that other book with the spells, but the “Wizard Book” sincerely claimed to teach magic. For the past few years, I’ve been working as a software developer in the newsroom, where perceptions of my kind have changed from novelty to a necessity. Recognizing this, some journalism schools now even require programming courses to teach students practical skills with databases or web frameworks.