DIY Arduino EEG by OpenScienceFund. Hackers backdoor the human brain, successfully extract sensitive data. Developer.neurosky.com/docs/lib/exe/fetch.php?media=mindwave_arduino_and_leds.pdf. Neurosky Brainwave Visualizer. Neurosky Brainwave Visualizer. Home » Art, Featured, Interesting, Mind Hacks, Personal Informatics, Quantified Self, Technology, Visualization I recently purchased a Neurosky Windwave EEG device ($100 model). The Mindwave measures your brain’s electrical activity, and can detect your level of focus (attention vs. mediation) and measure typical brainwave patterns (beta, alpha, theta, and delta). There are a number games included, and a wide range of ones to download from their appstore. I was surprised to see no immediate way to visualize or record the data coming from the device. Hacking the MindFlex, more! 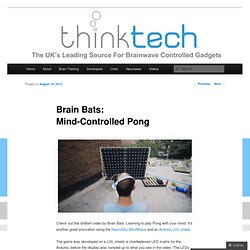 It’s another great innovation using the NeuroSky MindWave and an Arduino LOL shield. The game was developed on a LOL shield, a charlieplexed LED matrix for the Arduino, before the display was ramped up to what you see in the video. The LEDs are individually addressable, so you can use it to display anything in a 9×14 grid. Connecting MindWave dongle to arduino. Control any gadgets with your Brain! (Neurofeedback with Arduino Microcontroller) EEG With an Arduino - chipstein. Getting all the way down to the 1 Hz frequency range of EEG requires communication through a digital port; in the current era this would be a USB connector. 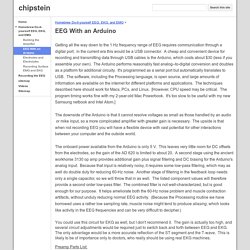 A cheap and convenient device for recording and transmitting data through USB cables is the Arduino, which costs about $30 (less if you assemble your own). The Arduino performs reasonably fast analog--to-digital conversion and doubles as a platform for additional circuity. It's programmed as a serial port but automatically translates to USB. The software, including the Processing language, is open source, and large amounts of information are available on the internet for different platforms and applications.

The techniques described here should work for Macs, PCs, and Linux. The downside of the Arduino is that it cannot resolve voltages as small as those handled by an audio or mike input, so a more complicated amplifier with greater gain is necessary. The onboard power available from the Arduino is only 5 V. Preamp Parts List: MindWave USB Dongle. The Neurosky Mindwave communicates via a proprietary radio-frequency stick, rather than bluetooth. 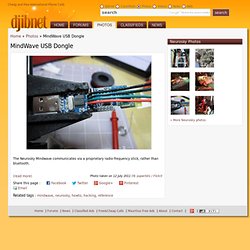 Neurosky offers instructions for modifying the dongle to communicate with an arduino (PDF link). I found parts of the instructions to be unclear: this picture is an attempt to clarify those bits. Shown above: 4 wires to solder into place on the board once you take it out of its housing. From top to bottom, they're ground, serial RX, serial TX, and 3.0V power.

Once you've soldered the wires in, you'll want to cut traces running from RX and TX to pins 3 and 4 on the CH340 chip. (read more) Photo taken on 12 July 2011 (© paperbits / Flickr) Related tags : Brain-Computer Interface Using Single-Channel Electroencephalography. MATLAB Serial Code The primary function of the MATLAB serial code is to acquire digital EEG signal data from the microcontroller over the serial port. We wrote some code to plot the signal onto the screen and to perform rudimentary signal processing tasks (FFT and filtering). The MATLAB code consists of three files: plot_samples.m, plot_samples_rt.m, and serial_test.m Figure: Calibration Signal Plotted within MATLAB The serial_test.m script opens the serial port and displays an almost real-time plot of the serial data. Spy on your brain and heart with Arduino EEG.

Have you always wanted to monitor your brains signals, but didn’t have the money or expertise for an expensive setup? 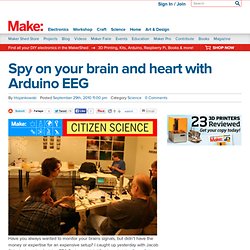 I caught up yesterday with Jacob Shiach about the Arduino EEG Project, which I first heard at the Open Science Summit in Berkeley, CA back in July. Here’s what Jacob had to say: From an outside view, it probably looks like a torture scene from a Bond flick. Forrest is sitting there with electric wires tied to metal washers duct-taped to the side of his head. While I adjust the power on a foreboding box that appears to cause Forrest’s face to distort in pain. How to hack EEG toys with arduino. Assembling the Arduino EEG Circult - chipstein. Do this on a humid day. 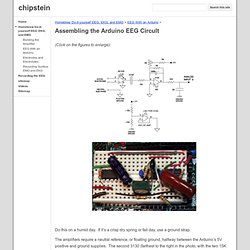 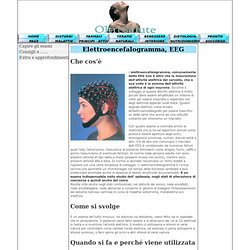