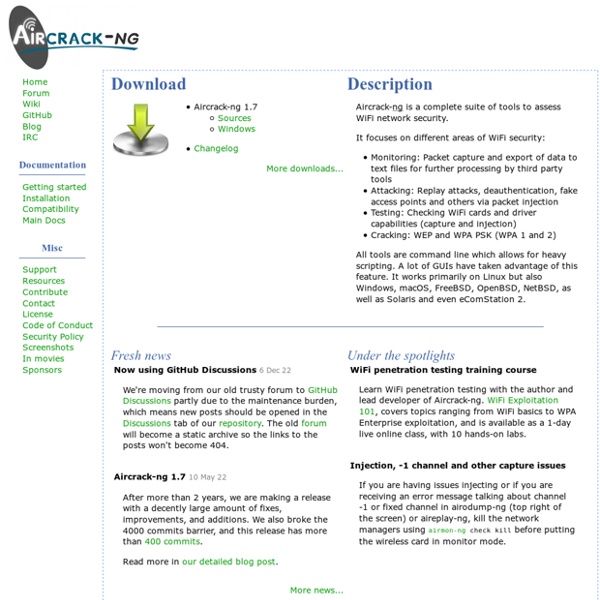 I guess you all heard about that nasty vulnerability in OpenSSL. If not, you can read more about it on Wikipedia. Aircrack-ng, the software itself, is not affected at all since it doesn't rely on heartbeat, so recompiling is not necessary. Some parts of the website may have been affected (only if you had an account on it): Wiki Trac SVN If you are concerned, you can contact me about it.

Configuring Synaptics Touchpad on a Macbook Under Linux « /pseudomorph It has been a while since I’ve posted anything up but today I’ve got a couple of little touchpad tips. My current everyday machine is an old Macbook 2,1 that I’ve had for quite a long time, just over 4 years if memory serves me correctly. Now most of the time I really enjoy the Apple hardware in this machine, if not the software. There is, however, the more than occasional time that I need to make the hardware play nice with the software I choose to use. Most of the time it’s not a case of a piece of hardware not working at all but – because it is Apple after all – it working in a way I don’t want, or mostly working but not just not perfectly. The Synaptics touchpad is one of these devices.

Tuning the Macbook touchpad in Linux The default synaptics driver settings in Linux are a little wonky, and are far from the feel of using the touchpad in OSX. I have spent some (read: too much) time tweaking these settings to a much more usable config. Getting under the hood Most distributions will automagically load the synaptics driver in X, so I’ll spare those details. How do I setup an ad-hoc (peer to peer) wireless network? Wireless Networking Forum FAQ Follow these simple steps:•1. Get one wireless network card for each computer•2. Go into the network card properties and set the SSID to something unique. Make sure to set the SSID to the same value on each machine.

8 Linux Commands: To Find Out Wireless Network Speed, Signal Strength And Other Information Linux operating systems comes with various set of tools allowing you to manipulate the Wireless Extensions and monitor wireless networks. This is a list of tools used for wireless network monitoring tools that can be used from your laptop or desktop system to find out network speed, bit rate, signal quality/strength, and much more. #1: Find out your wireless card chipset information Type the following command to list installed wireless card, enter: $ lspci $ lspci | grep -i wireless $ lspci | egrep -i --color 'wifi|wlan|wireless' Sample outputs:

What channel should I choose for my wireless network? Wireless Networking Forum FAQ A. For best performance, you should choose a channel at least 5 channels from y our neighbors' networks. Although 802.11b and 802.11g devices are designed to share the airwaves with neighboring networks, it is best to find a clear channel for several rea sons, chief among these: 1. Raspberry Pi Kernel Compile This tutorial will demonstrate how to cross compile the kernel for the Raspberry Pi on Ubuntu 12.04 LTS. The kernel is functional with both the Debian and Arch Linux Raspberry Pi images. First, install the package dependencies, git and the cross-compilation toolchain: sudo apt-get install git-core gcc-4.6-arm-linux-gnueabi Create a symlink for the cross compiler: sudo ln -s /usr/bin/arm-linux-gnueabi-gcc-4.6 /usr/bin/arm-linux-gnueabi-gcc

Mimo USB Monitor and Raspberry Pi - Anup Narkhede, Ruby on Rails developer, London Since past few weeks, I’ve been trying to put my Mimo UM-740 touchscreen monitor to a good use. Sounds old school, but yeah we are talking about pre-ipad age when I used it as a touch screen skypephone device. Follow this tutorial to configure the monitor as a primary display for raspberry-pi. Although I have explained the steps against Nanovision Mimo UM740, they should work with any displaylink USB monitor. My setup: 7 port powered USB hubRaspberryPi running raspbian wheezyMimo UM740 touchscreen monitorUbuntu 12.04 machine for kernel compilation