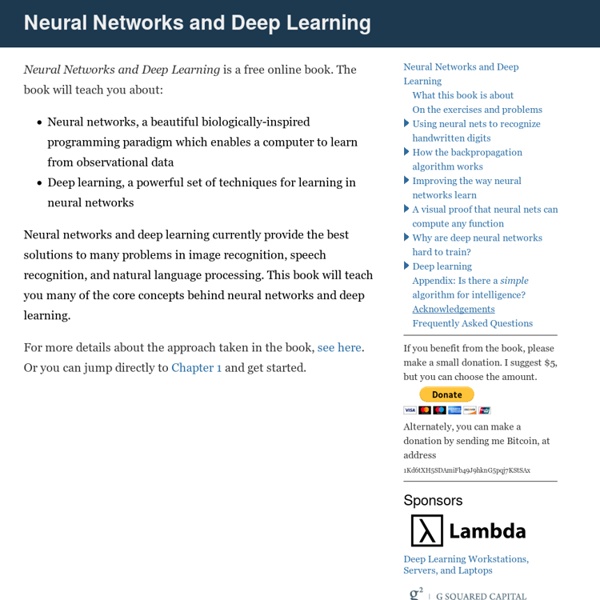 Recurrent Neural Networks Tutorial, Part 1 – Introduction to RNNs Recurrent Neural Networks (RNNs) are popular models that have shown great promise in many NLP tasks. But despite their recent popularity I’ve only found a limited number of resources that throughly explain how RNNs work, and how to implement them. That’s what this tutorial is about.

Best Google Fonts Combinations for a Modern Website Design The thing with choosing fonts… If you’re building a website and you’re not precisely a designer, you’ll find yourself facing a big challenge when it comes to choosing the right fonts for it. It’s definitely not an easy task. [徵求] 解釋深度學習原理易懂的文章 - 看板 DataScience 作者ponponjerry (ponpon) 看板DataScience 標題[徵求] 解釋深度學習原理易懂的文章 A Beginner's Guide to Recurrent Networks and LSTMs Contents The purpose of this post is to give students of neural networks an intuition about the functioning of recurrent networks and purpose and structure of a prominent variation, LSTMs. Recurrent nets are a type of artificial neural network designed to recognize patterns in sequences of data, such as text, genomes, handwriting, the spoken word, or numerical times series data emanating from sensors, stock markets and government agencies.

AI memories — expert systems December 3, 2015 This is part of a four post series spanning two blogs. As I mentioned in my quick AI history overview, I was pretty involved with AI vendors in the 1980s. Deep Learning For Coders—36 hours of lessons for free How to use this course Practical Deep Learning For Coders is designed to take anyone with at least one year's coding experience to the point they can apply deep learning best practices to create state of the art models in computer vision, natural language, and recommendation systems. The course is fairly general and students should be able to apply the techniques to other areas as well. The course consists of the following pieces:

5 Techniques To Understand Machine Learning Algorithms Without the Background in Mathematics Where does theory fit into a top-down approach to studying machine learning? In the traditional approach to teaching machine learning, theory comes first requiring an extensive background in mathematics to be able to understand it. In my approach to teaching machine learning, I start with teaching you how to work problems end-to-end and deliver results. Deep learning Branch of machine learning Deep learning (also known as deep structured learning or differential programming) is part of a broader family of machine learning methods based on artificial neural networks with representation learning. Learning can be supervised, semi-supervised or unsupervised.[1][2][3] How To Control WS2812B Individually Addressable LEDs using Arduino In this tutorial we will learn how to control individually addressable RGB LEDs or a WS2812B LED strip using Arduino. You can watch the following video or read the written tutorial below for more details. First we will explain the working principle through some basic examples and then take a look at really cool Arduino Project using these LEDs, a DIY interactive LED coffee table. The coffee table features WS2812B LEDs, infrared proximity sensors for detecting objects and a HC-05 Bluetooth module for controlling the colors via a custom-build Android app. This project is actually a collaboration between me and Marija from Creativity Hero YouTube channel. How WS2812B LEDs Work

Recurrent neural network A recurrent neural network (RNN) is a class of neural network where connections between units form a directed cycle. This creates an internal state of the network which allows it to exhibit dynamic temporal behavior. Unlike feedforward neural networks, RNNs can use their internal memory to process arbitrary sequences of inputs. This makes them applicable to tasks such as unsegmented connected handwriting recognition, where they have achieved the best known results.[1] Architectures[edit]

In-Depth: Interface DS3231 Precision RTC Module with Arduino We all know that most MCUs we use for our projects are time-agnostic; simply put they are unaware of the time around them. It’s OK for most of our projects but once in a while when you come across an idea where keeping time is a prime concern, DS3231 Precision RTC module is a savior. It’s perfect for projects containing data-logging, clock-building, time stamping, timers and alarms. DS3231 RTC chip At the heart of the module is a low-cost, extremely accurate RTC chip from Maxim – DS3231. It manages all timekeeping functions and features a simple two-wire I2C interface which can be easily interfaced with any microcontroller of your choice. Artificial neural network An artificial neural network is an interconnected group of nodes, akin to the vast network of neurons in a brain. Here, each circular node represents an artificial neuron and an arrow represents a connection from the output of one neuron to the input of another. For example, a neural network for handwriting recognition is defined by a set of input neurons which may be activated by the pixels of an input image. After being weighted and transformed by a function (determined by the network's designer), the activations of these neurons are then passed on to other neurons. This process is repeated until finally, an output neuron is activated. This determines which character was read.