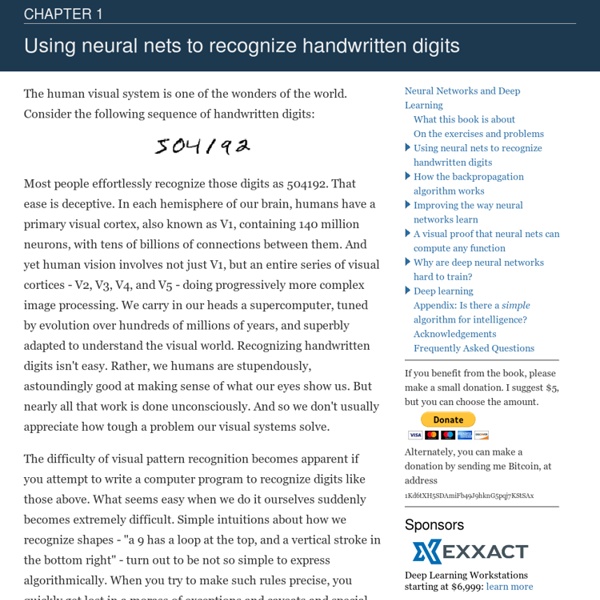 The human visual system is one of the wonders of the world. Consider the following sequence of handwritten digits: Most people effortlessly recognize those digits as 504192. That ease is deceptive. In each hemisphere of our brain, humans have a primary visual cortex, also known as V1, containing 140 million neurons, with tens of billions of connections between them. And yet human vision involves not just V1, but an entire series of visual cortices - V2, V3, V4, and V5 - doing progressively more complex image processing. The difficulty of visual pattern recognition becomes apparent if you attempt to write a computer program to recognize digits like those above. Neural networks approach the problem in a different way. and then develop a system which can learn from those training examples. In this chapter we'll write a computer program implementing a neural network that learns to recognize handwritten digits. Perceptrons What is a neural network? So how do perceptrons work? is a shorthand.

Former Facebook executive says society will COLLAPSE within 30 years as robots put half of humans out of work A former Facebook executive has quit his job and now lives as a recluse in the wilderness - because he is convinced that machines will take over the world. Antonio Garcia Martinez worked as a project manager for the social media giant in Silicon Valley but became terrified by the relentless march of technology. Facebook Getty - Contributor He reckons that machines will have taken half of humanity's jobs within 30 years, sparking revolt and armed conflict. The Nature of Code “You can’t process me with a normal brain.” — Charlie Sheen We’re at the end of our story. This is the last official chapter of this book (though I envision additional supplemental material for the website and perhaps new chapters in the future). We began with inanimate objects living in a world of forces and gave those objects desires, autonomy, and the ability to take action according to a system of rules.

Bayesian Methods for Hackers An intro to Bayesian methods and probabilistic programming from a computation/understanding-first, mathematics-second point of view. Prologue The Bayesian method is the natural approach to inference, yet it is hidden from readers behind chapters of slow, mathematical analysis. How Ideology Is Like Pokemon Go Released in July 2016, Pokémon Go is a location-based, augmented-reality game for mobile devices, typically played on mobile phones; players use the device’s GPS and camera to capture, battle, and train virtual creatures (“Pokémon”) who appear on the screen as if they were in the same real-world location as the player: As players travel the real world, their avatar moves along the game’s map. Different Pokémon species reside in different areas—for example, water-type Pokémon are generally found near water. When a player encounters a Pokémon, AR (Augmented Reality) mode uses the camera and gyroscope on the player’s mobile device to display an image of a Pokémon as though it were in the real world.

A Neural Network Playground Um, What Is a Neural Network? It’s a technique for building a computer program that learns from data. It is based very loosely on how we think the human brain works. First, a collection of software “neurons” are created and connected together, allowing them to send messages to each other. Next, the network is asked to solve a problem, which it attempts to do over and over, each time strengthening the connections that lead to success and diminishing those that lead to failure.

Take it from the insiders: Silicon Valley is eating your soul One source of angst came close to being 2017’s signature subject: how the internet and the tiny handful of companies that dominate it are affecting both individual minds and the present and future of the planet. The old idea of the online world as a burgeoning utopia looks to have peaked around the time of the Arab spring, and is in retreat. If you want a sense of how much has changed, picture the president of the US tweeting his latest provocation in the small hours, and consider an array of words and phrases now freighted with meaning: Russia, bots, troll farms, online abuse, fake news, dark money. Another sign of how much things have shifted is a volte-face by Silicon Valley’s most powerful man.

The Case for Responsible Innovation Is technological innovation good or bad? Seems like a silly question on the surface. But we have questions: Can self-driving cars ever be safe? Tutorial: Multilayer Perceptron This tutorial explains how to build a multilayer perceptron, a type of feedforward neural network which has been used for a wide variety of artificial intelligence tasks such as optical character recognition and speech recognition. The multilayer perceptron shown here uses the sigmoid function as the activation function and implements steepest gradient descent. Note: As this tutorial was written for someone with limited multivariable calculus and programming experience, some cool tricks (such as backpropagation optimizations) are left out.

unrealengine Jan 3, 2018 Unreal Engine 4 Mastery: Create Multiplayer Games with C++ in New Course from Udemy By Daniel Kayser 15 Myths That Can Ruin Your Mobile UX Mobile usage is steadily rising. The number of mobile phone users in the world will pass the five billion mark by 2019, and more than ever, people are engaging with their phones in crucial moments. The average U.S. user spends five hours per day on mobile, and the vast majority of that time is spent on apps and websites—making mobile an extremely valuable medium for app developers. What makes a good app and what makes a bad app? The difference often comes down to the quality of its user experience, which is why product teams spend countless hours perfecting their mobile UX. But like many disciplines, mobile design suffers from misconceptions and myths that can prevent designers from creating efficient products.

These Are The Technologies That Will Change Our Lives In The Next 10 Years Fast charging will help electric cars such as the Mercedes-Benz EQ Silver Arrow electric concept vehicle. Photographer: David Paul Morris/Bloomberg© 2018 Bloomberg Finance LP We are living in an age of massive technological change, but sometimes it is all so complicated it can be hard to work out what’s really going to change the world and what will fall by the wayside. Researchers at Lux have looked at the key technology innovations that are going to change the world economy – and our lives over the next 10 years. Its 19 for 2019 report looks at the innovations that are facing market roadblocks and those that are more likely to succeed because they fit an unmet market need. Battery fast-charging is one of a number of clean energy technologies on the list and will be a key enabler for the growth of the electric vehicle market, while solid state batteries will help to boost range in EVs and could move the industry beyond the lithium-ion era.

Clean up your cyber-hygiene – 6 changes to make in the new year Data breaches, widespread malware attacks and microtargeted personalized advertising were lowlights of digital life in 2018. As technologies change, so does the advice security experts give for how to best stay safe. As 2019 begins, I’ve pulled together a short list of suggestions for keeping your digital life secure and free of manipulative disinformation. 1. Set your boundaries and stick to them Marshall McLuhan: A media guru reconsidered This essay dedicated to Marshall McLuhan (1911 – 1980) was first published in 2011 to mark the 100th anniversary of his birth. It is both a critique and a celebration of McLuhan’s insightful thinking. Marshall McLuhan as portrayed by Playboy Magazine There’s a lot to be admired about the “prophet of the electronic age” who said “if it works it’s obsolete”. Marshall McLuhan coined the term the “Global Village”.