The Rise of Entrepreneurship on College Campuses (Infographic) 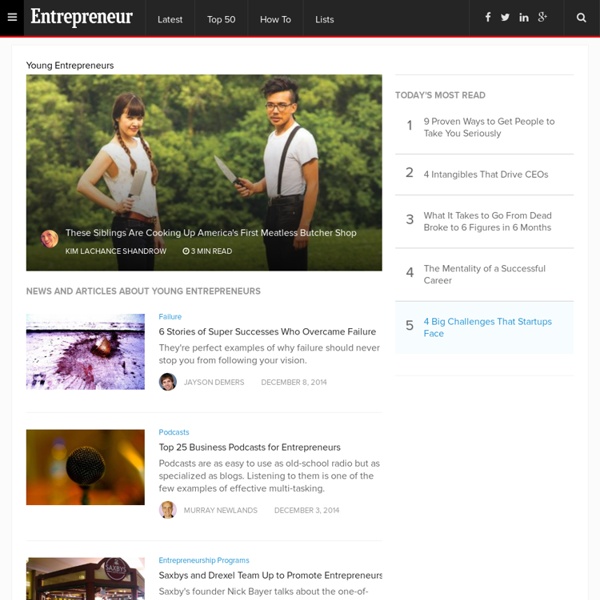 Skip Advertisement This ad will close in 15 seconds... Young Entrepreneurs Today's Most Read 9 Proven Ways to Get People to Take You Seriously 4 Intangibles That Drive CEOs What It Takes to Go From Dead Broke to 6 Figures in 6 Months The Mentality of a Successful Career 4 Big Challenges That Startups Face These Siblings Are Cooking Up America's First Meatless Butcher Shop Kim Lachance Shandrow 3 min read News and Articles About Young Entrepreneurs Failure 6 Stories of Super Successes Who Overcame Failure They're perfect examples of why failure should never stop you from following your vision. Jayson DeMers Podcasts Top 25 Business Podcasts for Entrepreneurs Podcasts are as easy to use as old-school radio but as specialized as blogs. Murray Newlands Entrepreneurship Programs Saxbys and Drexel Team Up to Promote Entrepreneurship Saxby's founder Nick Bayer talks about the one-of-a-kind program and why he wishes there was one for himself years ago. Carly Okyle Presented by Young Entrepreneurs Laura Entis Fear

Infographic: Over 400 Vegetables On One Incredibly Healthy Poster When you’re a kid, vegetables are the worst. With time, however, their appeal presents itself. That has to do in part with maturing taste buds, and from a better understanding of the importance of healthy eating. But it also happens simply as you get acquainted with the sheer size of the vegetable kingdom. You not only have diverse families, from tomatoes to taproots to tubers, but also a staggering diversity within those groups. And even when you think you know your veggies, there are more to discover.

5 Ways To Break The Ice At Networking Events Networking is not about how many resumes or business cards you hand out, but how you establish rapport and build a relationship that can lead to opportunities. Attending a networking event is only the beginning of the networking process. Effective networking takes time and builds lasting relationships where both parties can help one another. Related: 18 Easy Conversation Starters For Networking Events Many job seekers I often speak with are intimidated by networking events. It’s not that they do not want to network; it’s that they don’t know how to approach people they don’t know.

Advanced Negotiation Tactics Very few of us are critically dependent on negotiation skills every day of our life, but usually when critical moments arise, such as buying a big ticket item, selling a complex contract or a large project, getting a new job, or fighting for a raise... negotiation skills become critical. Similarly, when you are unexpectedly approached by someone else who demands something from you, or when a conflict arise (e.g. someone is unhappy about something and threatens you with legal action), this give rise to situations where negotiation skills are very useful. In life we don't always get what we deserve, we get what we can negotiate. Many gurus and books mistakenly view negotiation as a co-operative activity where you have to build trust and establish rapport. (With the purpose of reducing the mood from adversarial to co-operative) They recommend trying to understand the other person's point of view, their interrests and concerns.

Ideas for Startups October 2005 (This essay is derived from a talk at the 2005 Startup School.) How do you get good ideas for startups? That's probably the number one question people ask me. I'd like to reply with another question: why do people think it's hard to come up with ideas for startups? That might seem a stupid thing to ask. Build a Killer Website: 19 Dos and Don'ts I’m continually surprised by how many people call my design company with very firm ideas about what they want on their business website and yet, they haven’t thought through some of the most basic questions first. For this reason, our first question is always “Why do you need a site?,” not “What do you want on it?” At bottom your website is a marketing tool. For many businesses, it’s the only source of business. If done right, it can be a major part of yours.

Infographic: How To Make Every Coffee Drink You Ever Wanted The folks at PopChartLab have already tackled breweries, cocktails, and pies with their eye-pleasing infographics, each one meticulously researched and gorgeously rendered. It’s a process[/url ] that undoubtedly involves a lot of coffee. Their newest work celebrates the whole family tree. Click to enlarge. The [url= Coffee Chart lays out the entire coffee ecosystem, outlining how various methods of production, including the French press, Kyoto dripper, and Neapolitan flip, among others, are used to create coffees, cortados, cappuccinos, and more. 1 Thing A Personal Brand Needs To Convey Building a consistent personal brand can be quite an undertaking. A personal brand means many things to many people. To Jeff Bezos of Amazon, your personal brand is what people say about you when you aren’t in the room. I believe the personal brand is the intersection of what you’re great at, what you aspire to be and who you really are.

Mediation & Conflict Resolution - DY 3Solutions Ltd Today's workplace can be a stressful and challenging environment yet we know that a positive and supportive working environment is good for productivity and has a huge impact on the emotional and social well-being of all concerned. We offer Conflict Resolution & Mediation where relationships have become broken and require a facilitated approach to acceptable restoration. We will work with you to find common sense, deliverable and mutually acceptable resolution to work-based issues.

Mutual Funds Invest in Brazilian Online Deals Company SÃO PAULO, Brazil — Peixe Urbano, Brazil’s first online daily deal company, has closed a series C round of financing with mutual funds and institutional accounts managed by Morgan Stanley Investment Management and T. Rowe Price Associates. General Atlantic and Tiger Global Management, who had previously backed the company, also participated. The size of investment was not disclosed. 7 Steps to Closing a Deal Via Email In most cases, you’ll want to close deals either in person or on the telephone. It’s more personal and more likely to work. And you’ll know, right away, whether you’ve got the business. Even so, it’s sometimes more convenient to ask for the business via email. Here’s a simple seven-step process for writing an email that can actually close: Step No. 1.

Infographic Of The Day: Are U.S. Cities Like Detroit Really Dying? Flight to the suburbs, urban decay, ruin porn--we've all become yawningly familiar with these tropes of modern migration. But a set of fascinating new maps based on data from the 2000 and 2010 U.S. Census shows that, if you look really closely, those ho-hum trends aren't as simple as they seem. Would you believe that buried in the downtown heart of supposedly dead Detroit, there's actually been an influx of residents? Well, here's the proof in black and white--or rather, blue and red (the blue areas have seen population growth over the past decade; red areas have declined):

9 Guaranteed Ways To Become A Public Speaking Master Although the thought of public speaking can send many of us into a fearful frenzy, many jobs require us to swallow our fear and do the best we can with it. From presenting ideas or information in a meeting to introducing your company to new clients, there are numerous occasions on which it will be necessary for you to stand up, look confident and speak to your audience with all the gumption you can muster. So if you must partake in public speaking, why not do the best job you possibly can?