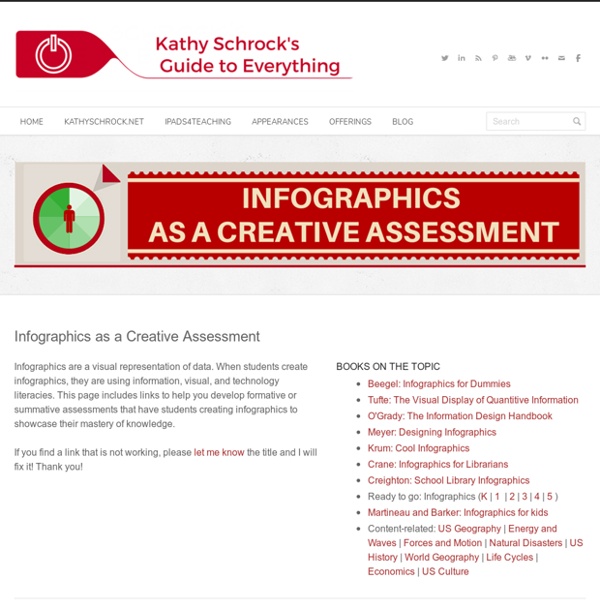 Blog Wired has a fascinating article out about a newly-released and free facial recognition tool that, coupled with existing video monitoring, claims to keep schools safer. From the article by Issie Lapowski: “RealNetworks has developed a facial recognition tool that it hopes will help schools more accurately monitor who gets past their front doors. Today, the company launched a website where school administrators can download the tool, called SAFR, for free and integrate it with their own camera systems … [F]acial recognition technology often misidentifies black people and women at higher rates than white men.

Infographics Best Practices - Grasshopper Marketing Infographics do more than tell information. They tell a visual story. More precisely, they tell the point of the story. They’ve earned a growing reputation for an ability to relay information that engages a target audience. But not all infographics work. Some don’t combine info and graphic portions into a whole worth more than the sum of the parts. 5 Great Online Tools for Creating Infographics Professional infographic designers rely primarily on a core vector graphics software program to create their infographics designs. The main advantage is that all the icons, charts, images, illustrations, and data visualizations are treated as separate objects that can be easily moved, resized, overlapped, and rotated. No matter where you create the individual design elements, the final infographic design is usually put together in a vector graphics program.

Two Simple Questions to Ask Before Every Presentation This post was written by Aristotle Presentation philosopher, teacher, in search of the best gyro. State of mind is the intangible deciding factor in how presentations are delivered. YouTube and online video in the classroom – Features – ABC Technology and Games Using videos is as old as the hills, and so are some of the videos being used to teach key ideas in our classrooms. If you're my vintage you might recall the old Commander video system where the teacher called the library and had a cued-up VCR play through a TV bolted to the wall, cursing when the brick-sized remote failed to pause or rewind at vital moments. Now we can use our digital projectors or Interactive White Boards to show online clips from around the world at a whim. With all that in mind, I thought now was a good time to share the rules I have developed for using online videos in class: Deal with the YouTube distraction machine

The beauty of data visualization - David McCandless To create his infographic about nutritional supplements, it took McCandless a month to review about 1,000 medical studies and design the visual. Is that level of effort surprising, and do you think it’s worth it? Try out the interactive version that’s available on McCandless’s website. What engaged or surprised you? What, if anything, would you change to improve the user experience? Write a brief review and post it to the site.

Why Are Infographics So Darn Effective? [Infographic] We all know that it's more fun to look at pretty pictures or watch cool videos than it is to read plain text. Why is that? Our brains do less work to digest visual content, first of all. Getting students active in the classroom is a tough task for any teacher. But there’s a silver bullet that is, quite literally, silver. It’s the Apple iPad and this expensive, silver, and engaging device is making its way into classrooms around the world. Since there’s such a push to bring apps into the classroom, it’s time to figure out which ones are right for you. Presenter’s Toolbox: Apps and Gear For a Successful Presentation As someone who runs a presentation company and speaks publicly for a living, I often get asked about my arsenal of presentation tools. I thought I’d give an inside look into what I use on a consistent basis. Here’s my checklist for a successful presentation: Pre-Presentation I’m a huge advocate of always having a back-up plan, so I carry duplicates of many items to make sure I can get on stage with no unnecessary glitches.

Reality TV and E-Learning: The Next Frontier? Three Possible Edu-Reality Shows You don't want to watch, but once you do, you want more and more. You ask yourself why, and all you can come up with is that there is something cathartic about tragedy (not exactly a new finding -- but ranks up there with the eternal verities) -- and, the Aristotelian ideas / precepts still hold: the tragic hero is compelling because of the essentially flawed nature of his/her beingness, and hubris resides at the core. "There but for the grace of God ..." we intone because we all have a "hubris trigger" in our heart of hearts -- we all would love to be invincible and to somehow transcend / escape angst, pain, fear of death, and death itself.

Why Kids Need Data Literacy, and How You Can Teach It Samantha Viotty’s activity for visualizing data networks has gummy bears representing people and toothpicks signifying their relationships. Photo courtesy of Samatha Viotty Data is all around us, from the output of your Fitbit to interactive maps that track voters to the latest visualization of the New York Times front page. With the rise of mobile devices and wearable technology, data is more available to general audiences, and the amount being generated has also exploded. According to IBM, 90 percent of the world’s data has been created in the last two years. This vast pool of information is being used to advocate for change, justify decisions, and suggest personal action plans—such as the U.S.

How to Turn Infographics Into Effective Teaching Tools Infographics have already established themselves as engaging news and marketing tools, but they are also entering the education space in new and exciting ways. Teachers can find infographics useful classroom tools in a number of ways. Most prominently, a good graphic makes information easily accessible, as it feeds into many students’ natural tendency to learn by seeing and interacting. As educators around the country transition to the new Common Core State Standards, infographics can help them meet their learning goals. For those unfamiliar with the Common Core conversation, the new standards are meant to “provide a consistent, clear understanding of what students are expected to learn,” across the U.S. public education system. Despite the arguments of CC detractors, what students are “expected to learn” are not facts so much as argumentation, logic and how to vet and interpret information.

Kathy Schrock's Guide to Everything also includes a page on infographics titled: "Infographics as a Creative Assessment." This page has a wealth of resources on infographics in the form of books, websites, videos, and online tutorials about how to use and create them. It also includes lists of links to view samples, a list of possible topics students could create an infographic on, and even data sets that could be used in creating one. There is also a list of "software, sites, and tools" that can be used to create infographics, which includes Piktochart. Kathy even has some rubrics available for teachers and librarians to use as they evaluate students' projects. by journeylibrary Jul 27