NerdGraph - The best infographics blog of the galaxy! 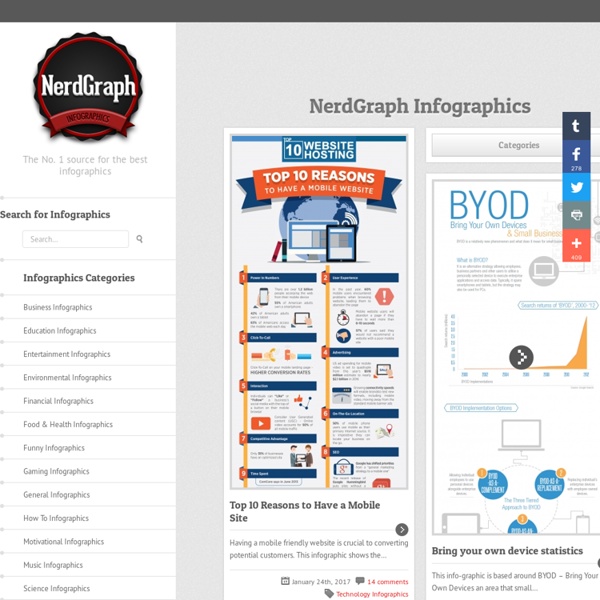 Skip to primary content Skip to secondary content Categories Saving Money in your Twenties In your twenties, you have it in your power to prepare for the financial realities… April 10th, 2014 comments Financial Infographics

The 83 best infographics Every picture tells a story, as they say, but sometimes it takes a clever combination of words and pictures to tell a story quickly, concisely and in an entertaining fashion. The best infographics may look like they were simple to create in Photoshop, but designing an effective piece of data visualization is usually anything but. There are several great tools to create infographics, but these examples of infographics from around the web will show you how you can take it a step further and add a bit of style and personality to your data.

The Social Media Publishing Schedule Every Marketer Needs [Template] We have a 9 a.m. meeting? Yikes! Hold on -- let me just click around the internet like a maniac to find something for the morning tweet. Sound familiar? Infographics and Best Practices This may seem a little meta to have an infographic about infographics, but the best practices that it shares are sound. The most reliable source of infographics that I’ve found is from press releases or direct pitches. I’m curious to know your thoughts on this one.

Top 51 Free Tools for Making Infographics Telling your story in visual form through the use of infographics has been one of the hottest trends in recent times. Given the tremendous information available online, people are now more interested to get information through colorful and interesting graphics, instead of words and numbers. Creating infographics, however, requires tremendous analytical and creative skills plus the ability to convert these data and information into interesting visuals. The good news is, there are available resources online that you can use to help you create infographics. 20 Animated And Interactive Infographics You Have To See Everyone loves infographics, sure, but static infographics are a bit old hat now. With so many infographics out there, it’s easy to overlook a lot of infographics with good content just because they just don’t stand out from the rest of the pack. And, if you’re a designer, you’ve probably racked your brains trying to figure out how to attract viewers and create infographics that do stand out from the rest.

50 Informative and Well-Designed Infographics - Hongkiat It’s impossible to comprehend complex data or analyze large amounts of information, if we only use words or texts. Information graphics or better known as infographics are visual explanation of data, information or knowledge. These graphics are excellent visual tools for explaining huge amounts of information where complex data needs to be explained immediately and clearly. Let me show you how Rick Mans explain how infographics ease the process of communicating conceptual information Image credit. Infographic is one of the most challenging types of graphic design because the creation process alone is pretty intensive.

World Cup InfoPosters worth seeing The 2014 World Cup has been well-covered here on Visual Loop, bringing you the latest visualizations, interactive maps and print infographics that are published as the competition progresses. Our World Cup Pinterest board, now with more than 200 examples of visual journalism from newspapers and magazines, will surely keep on growing during the next weeks, with such a prolific production. But, naturally, a passionate topic such as this – we’re talking about the most popular sports in the world, after all – draws the attention from other creatives and publishers. Yes, we’re including here “those” types of infoposters, but also special projects that, despite being outside the journalistic sphere, are as impressive and visual appealing as they can be.

Music Infographics - NerdGraph Infographics You Brain on Music We here at Snapverse are huge believers in the power of music. In fact, we… Michael Jackson Check it this infographic for facts about pop music sensation Michael Jackson. Find out about… This Is Your Brain On Music [Infographic] We know music can profoundly affect us, whether you're the type who gets weepy at a classical performance or kicks a child at a metal show. But what exactly is going on in our brains when that happens? This cartoony infographic from the University of Florida breaks it down, from the ear to the brain. It also includes some interesting notes about the correlation between brainwaves and emotions. Low beta waves, for example, are associated with concentration and alertness, while alpha waves are associated with relaxation and daydreams. But maybe take some of this stuff with a grain of salt: Taking a class on music education isn't necessarily going to improve your SAT scores, even if picking up the trombone is correlated with bubbling in the right answers.