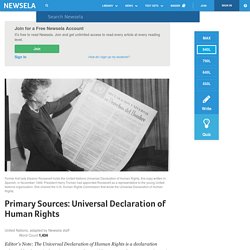 It was written shortly after World War II. The atrocities committed by Nazi Germany during the Holocaust shocked the world. It pushed countries to develop a set of standards and protections on how to treat their fellow humans. Civil war makes a lost generation of Syrian schoolchildren. MAJDAL ANJAR, Lebanon — Along with some 20 other Syrian children, 13-year-old Anas braves rain, mud and cold to attend class in a tent pitched along Lebanon's border with Syria.

This home of a Syrian refugee family serves as a classroom for four hours each day. Many Syrians have become refugees, fleeing their homeland to escape the violence there that has been caused by political unrest. There is a civil war in Syria between the army led by Syria's president and rebels, who want to overthrow him. In the classroom tent, there are no benches and no blackboard, no textbooks and no notebooks. There are just sheets of paper and some pencils and crayons that two young refugee women use to teach children like Anas how to read and write, count and draw, sing songs and recite poems.

But even Anas might be considered one of the luckier ones in Syria's long conflict, which reached its third anniversary on Saturday. Pakistani man teaches poor kids in a park, keeps promise to his dying dad. ISLAMABAD — On any given day in the Pakistani capital, a group of young people can be seen gathered outdoors in an open field. 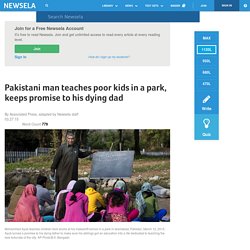 Their books are open and the people are looking at makeshift blackboards attached to metal pipes in an open-air school. The school is the product of years of effort by Mohammed Ayub, a Pakistani man of humble origins who turned a promise to his dying father to make sure his siblings got an education into a life dedicated to teaching the less fortunate of this city. For three decades, children who might otherwise have received no education sat through his classes. "I really don't remember how many have passed through (the school). Chance the Rapper hands troubled Chicago Public Schools $1 million. SPRINGFIELD, Ill. — Last week, Illinois Governor Bruce Rauner offered two options to provide $215 million in funding to cash-strapped Chicago Public Schools (CPS). 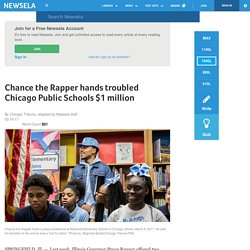 Hours later, Chance the Rapper made an announcement. The Grammy-winning musician said he will donate $1 million to CPS to support arts programming in the district. The rapper called his donation a "call to action" and asked the city’s business community to make donations, too. Chance, who was born Chancelor Bennett, is unhappy with Rauner's solutions for funding Chicago's public schools. The rapper met with Rauner last week but described the meeting as “unsuccessful.” Most Syrian refugee children work or stay home instead of going to school. SAADNAYEL, Lebanon — Saddam al-Khleif is a refugee from Syria. 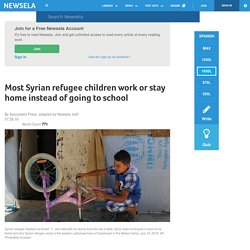 He and his family fled the country when civil war broke out there five years ago. They now live in Lebanon. Khleif is 11 years old, but he does not go to school. He spends most of his days either watching TV or playing outside his tent. Al-Khleif's two older brothers do not go to school either. "I love to play and prefer to go to work rather than going to school," said al-Khleif, who around noon on Tuesday was still wearing his pajamas. Many Syrian Refugee Children Don't Attend School There are many children like al-Khleif. The organization Human Rights Watch (HRW) has been investigating the situation and released a report Tuesday. The report raises concerns that an entire generation of Syrian children might grow up without education. Like al-Khleif, 10-year-old Loay Mohammed does not attend school. Opinion: America needs to raise the bar on education for our students. As first lady, I have spent a lot of time talking with young people all across this country about education. 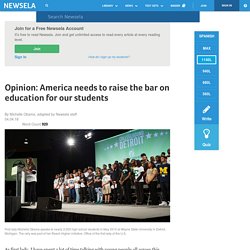 I have heard about their hopes of going to college, getting good jobs and one day starting families of their own. I also have heard about the challenges they face: the rising costs of tuition and the insecurities and fears that come along with being first-generation college students. My message to these young people is simple. While all of us adults — teachers, administrators and policymakers — have to do a better job of giving them the best schools and opportunities for their future, at the end of the day, they also need to step up and take responsibility for their education themselves. What that means is going to class every day, setting their goals high and working like crazy to achieve them. Reach Higher For Higher Education. Michelle Obama calls on "the power of education" WASHINGTON — First lady Michelle Obama gave a speech on Friday. 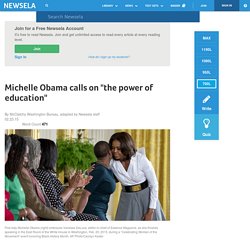 Her talk was part of an event held to mark Black History Month. Obama said that the most important thing for blacks today is to get a good education.