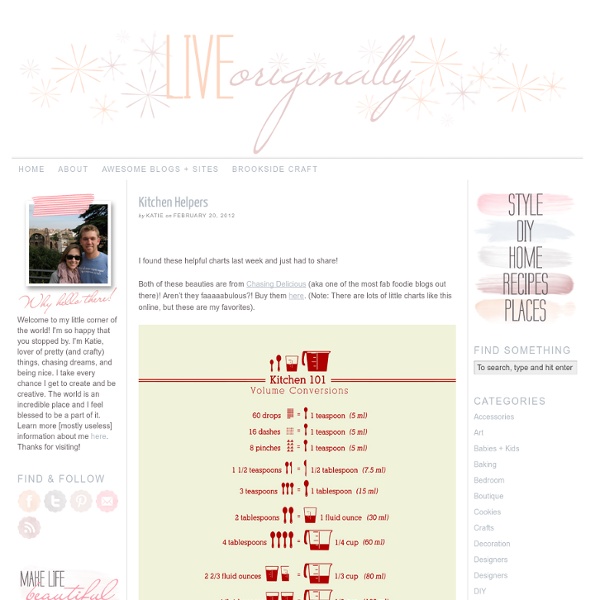 I found these helpful charts last week and just had to share! Both of these beauties are from Chasing Delicious (aka one of the most fab foodie blogs out there)! Aren’t they faaaaabulous?! Buy them here. (Note: There are lots of little charts like this online, but these are my favorites). I love tea, but I’m no expert. For people of the UK, have this one with you while you’re meal planning or grocery shopping! I’ve fond some other helpful charts that I’ll share in another post! Yay charts!

Global Food Disparity: A Photo Diary In an increasingly globalized world, it’s still sometimes shocking to see just how disparate our lives are compared with other human beings around the world. A book of photographs by Peter Menzel called "Hungry Planet: What the World Eats" ("©Peter Menzel www.menzelphoto.com. Ten Speed Press, published in 2005) makes a relevant point with great irony: at a time when hundreds of millions of people don't have enough to eat, hundreds of millions more are eating too much and are overweight or obese. Thinner thighs: 6 Moves to leaner legs The Figure Method For Thinner Thighs Oh, those elusive thin thighs! What we all wouldn't do to have them!

Movie Facts Click Here For More Fun Movie Facts About the author: Prasad View all posts by Prasad Get Cooking with Free Online Learning Resources Reading an unfamiliar recipe can be frustrating: What steps, exactly, do you take to butterfly a chicken? How small is a fine dice? When the recipe says, “cook until browned,” just how brown should it be? Cooking lessons can give you clarity on all those questions, and impart skills to improve your kitchen abilities. But they often come with a price. You’ll easily spend $50 and up for a few hours of one-on-one instruction on a single food or topic, and up to several thousands for true mastery through a lengthier professional lesson or class series.

Mexican Shredded Chicken by Kate Heyhoe Yield: About 4 to 5 cups shredded chicken, plus broth Traditional Mexican poached chicken uses water as the sole poaching liquid, but it also uses a whole bird with white and dark meat. London’s Best Farmers' Markets London’s your oyster when it comes to finding mouthwatering produce. We pick the city’s best (and most easily accessible) farmers' markets that specialise in quality, well-sourced wares Vernal abundance at Cabbages and Frocks © Natalie Pecht Central | North | East | South | WestCentralPimlico Road Farmers’ Market Incredibly chi-chi, but not without a bit of eccentricity – sure there are lots of straw hats, tea dresses and wicker baskets, but on our visit a jovial old man was entertaining the market goers with a hearty song played on his battered accordion. Suddenly, it felt like Paris.

- StumbleUpon Who came up with the idea that we are supposed to drink orange juice at breakfast? And why, if oatmeal is so good for us, do we eat that only in the morning as well? Apologies to the Palinites, but nutritionists are starting to realize that you and I like our oatmeal and OJ before we start the day because we evolved to like it that way—because enjoying the two together is healthier than eating each of them alone. Epidemiologist David R. The Ultimate Steak Manual - Food The steak is the connoisseur’s meat dish; a subject of debate, delight and potential disappointment. To encourage the first two and avoid the last, we’ve consulted three prime-cut experts and one wine expert to produce a definitive instruction manual so that you, the antlerless man, can prevail in the battle of the beef. Rib-eye The rib-eye is the rising star of the steak world. As people have become more steak-conscious, this fatty, flavoursome cut has shot up the popularity charts. “Our customers’ favourite cut,” says Richard Turner, head chef at London’s famous Hawksmoor steak restaurant.

Chocolate Cheesecake Cake Chocolate Cheesecake Cake You know how some people really don’t get along well with their In-Laws? How visits with them are stressful and awkward and generally awful for many people? Chocolate Guinness Cake Chocolate Guinness Cake March 20, 2012 | By Adam Roberts | 13 Comments Here’s how you know I’m the real deal: whereas most food publications will cram an upcoming holiday down your throat in hopes that you’ll link to their page as you plan your holiday meal, I’m not so clever or strategic. I wait until the holiday’s over, when the post will no longer be relevant, and then I blog about it. When Chefs Get Bored Slick Men It's a Man's World. When Chefs Get Bored By – 2012/04/15Posted in: Art & Pictures Apple Love

Smart tips to make life easier - StumbleUpon Posted on February 24, 2012 in Humor If you’re new here, you may want to subscribe to our RSS feed or follow us on Facebook or Twitter . Thanks for visiting! Rate this Post 2003: an illusory space odyssey 2003: an illusory space odyssey Let's go to the space! Fill energy. (Something appears to run in the gray radii) Go! (The figure appears to vibrate in the radial direction)