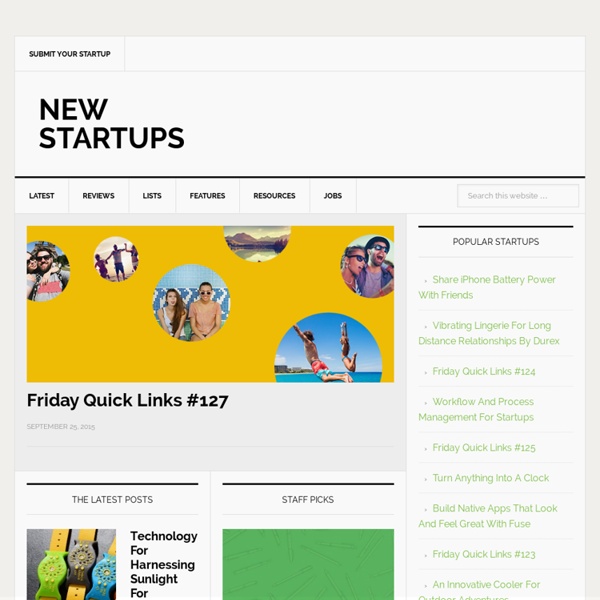 4 Promising Curation Tools That Help Make Sense of the Web Steven Rosenbaum is a curator, author, filmmaker and entrepreneur. He is the CEO of Magnify.net, a real-time video curation engine for publishers, brands, and websites. His book Curation Nation is slated to be published this spring by McGrawHill Business. As the volume of content swirling around the web continues to grow, we're finding ourselves drowning in a deluge of data. Where is the relevant material? The solution on the horizon is curation. In the past 90 days alone, there has been an explosion of new software offerings that are the early leaders in the curation tools category. 1. Storify co-founder Burt Herman worked as a reporter for the Associated Press during a 12-year career, six of those in news management as a bureau chief and supervising correspondent. At the AP, editors sending messages to reporters asking them to do a story would regularly write, “Can u pls storify?” Storify is currently invite only. 2. Scoop.it is often described as Tumblr without the blog. 3. 4.

Documentación clave - Descargas gratis de Plantillas y Modelos de Cartas - EMPRENDEDORES.es Suscríbete a la revista, te ahorrarás un 20% y recibirás 12 números por sólo 28,80 euros. Accede a nuestro Quiosco Digital y disfruta de la revista en tu tableta, estés donde estés. Lo mejor de Emprendedores en tu correo. What is Foursquare? You may have heard this morning that foursquare is launching in the UK. And if you haven't, shame on you for not having Pocket-lint open all day. If you don't know what foursquare is on the other hand, then that's a whole lot more forgiveable seeing as the service only started in March this year at the SXSW technology, music and film extravaganza. So, for the majority of us... What is foursquare? In a nutshell, it's a location service-based social network-come-game. How does it work? The whole system is based around what is known as "checking-in". And what about the game? The clever, or clever-er, part is that you get points for checking-in. Naturally, the points aren't good for anything other than bragging rights but that's currency a-plenty with a leader board on the site with the top users. You can also earn badges as you check-in which is where the parallel of World of Warcraft and its Achievements system lies. The really clever part How do I start? Can anyone use it? Well, yes and no.

emprendeGO - Un concurso de ideas innovadoras. Una apuesta por el emprendedor. Group's Social Startups To Watch in 2012 | Meltwater Blog 2011 is coming to a close and we’re reflecting back on the year. We’ve witnessed a huge explosion in social sites and we’re highlighting some of the best. While tech, social media and social networking are some of the hardest industries to predict, with their rapid changes, failures, merging and selling, we’re still interested in seeing what some of our favorite social startups will do in 2012. So, in no particular order, our top social startups to watch in 2012: Tumblr : This isn’t a blogging site, it’s a sharing site. Spotify : Finally made legal in the U.S. just a few months ago, Spotify has been a massive international sensation. TurnTable.fm : A social site allowing users to listen to digital music together, simulating a concert or club experience is a no-brainer. Pinterest : You’re browsing the Internet and sharing the things you love with friends. TaskRabbit : A site that allows you to put a price on your personal tasks and pay “friendly, reliable people” to do them.

Fan Page List - The List of Official Facebook Fan Pages & Twitter Users The Social Cloud: Promising Social Media Startups for 2012 The Social Cloud: Promising Social Media Startups for 2012 While Facebook continues to dominate the Social media scene and rumors abound as to its next acquisition (probably Digg according to some people) many more startups are joining it by providing services somewhat different from the usual. Promising Cloud Based Social Media Startups to watch for in 2012 include Tumblr, Pinterest and Wooplr. Tumblr While it may seem like Tumblr.com is just another blog platform (or in their own words: microblogging) like WordPress and Blogspot, in reality it is much more like a social sharing site for pictures, text, media, video or whatever else that strikes your fancy, with more emphasis on the social than the media. The very design of this startup is streamlined so that you have minimal text and super-easy access to get your quotes, pictures, images and media online and into the Cloud where it resides for others to look through and interact with. Pinterest Wooplr By Muz Ismail

Cassandra Daily In this month’s edition of First Fridays, we introduce you to Ivan Fatovic, the founder and CEO of Modamily, a new online community created to facilitate introductions between responsible, like-minded adults committed to co-parenting a child. Ivan was inspired to start the platform when he noticed a significant number of family members and friends delaying marriage and children to focus on their careers—a trend that’s not just happening within his social circle but is also becoming widespread among Generations X and Y. His belief is that co-parenting, in which two people who may never intend to marry or cohabitate agree to share responsibility for rearing kids, could protect children from growing up in households of discontent. Read on for more of his thoughts on the future of the modern family... If you had to choose one word or phrase to describe Modamily, what would it be? Co-parenting…helping people fulfill their dream of becoming a parent on their own terms.

6 Startups to Watch in 2012 An Olympic games, a U.S. presidential election and the end of the world are already planned for 2012, but we're more excited about the startups. Here are six of them (in no particular order) that we expect to help define the coming year. We chose companies based on the momentum they gained in 2011, promising new takes on old problems and, in one case, the possibility of an IPO. Did we look at every startup in the world before compiling this list? Nope. 1. Skillshare is an online marketplace for offline classes. While the startup began with classes clustered in New York City, it now has budding communities in San Francisco, Chicago, Boston and elsewhere. 2. We're pretty sure that the mobile, local version of Craigslist will gain traction in 2012. 3. LevelUp users link any credit or debit card to their LevelUp accounts the same way that Starbucks links a gift card to its app. Since launching in October, the app has signed up more than 100,000 users and has about 1,000 businesses. 4. 5. 6.

7 Ways to Help You Finish Any Project Are you good at starting something new, but struggle to finish? If you are like me, you develop incredible plans. Big ideas. Remarkable dreams. But your story seems the same. It’s a great place to begin, but it’s not enough. The Tunnel of Awesome One summer my next door neighbor and I decided to build a tunnel in our back yards. An army shovel is basically a large spade with a short handle on it. His parents typically grew a vegetable garden every summer, but for some reason they didn’t that year. I know what you are thinking. Wrong. A Dying Dream We began what felt like the most important project of our lives taking turns digging with our much-too-small shovel. By lunchtime we were beginning to grow tired, and before dinner we quit. And we did what so many people do, we moved on to the next big thing. It was the first of many “incredible projects that would die without being completed. How to Become a Finisher Then the work becomes hard. , and is difficult to see through to the end. 1. 2. 3.