8 Things You Won't Believe Can Be Hacked 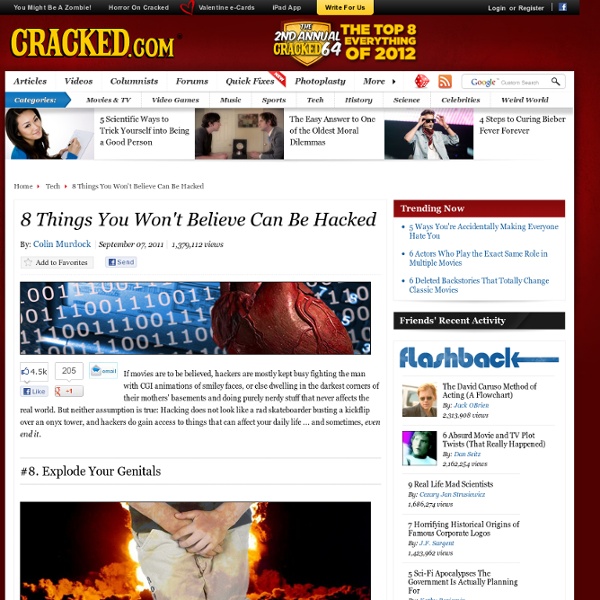 If movies are to be believed, hackers are mostly kept busy fighting the man with CGI animations of smiley faces, or else dwelling in the darkest corners of their mothers' basements and doing purely nerdy stuff that never affects the real world. But neither assumption is true: Hacking does not look like a rad skateboarder busting a kickflip over an onyx tower, and hackers do gain access to things that can affect your daily life ... and sometimes, even end it. #8. Explode Your Genitals We think we have a pretty good idea of what hackers are capable of: stealing your personal information, crashing your computer, Rollerblading like a sonofabitch and making out with Angelina Jolie (back when she was hot, before her alien DNA kicked in and she started looking like a hawk-monster). But today's hackers have finally crossed a line, and must be terminated with extreme prejudice. Photos.com"The good news is that your leg is going to be fine ..." "Is it enough to Sharpie 'Avira' onto them?" #7. #6.

7 Most Notorious Computer Hacker Groups of All Time With the recent attack on PlayStation Network and a bunch of high-profile websites, computer hackers are back in the limelight again. Hackers and hacker groups were quite famous in the 80’s and 90’s but their popularity started fading since the Y2K days. Today, we are once again witnessing hackers threatening to take on giant corporations sending chills down everyone's spine. We have already featured here some of the most infamous black hat hackers of all time. This time, we will take a quick look at some of the most notorious computer hacker groups that ever existed: Masters of Deception This New York-based group was responsible for notorious acts such as downloading confidential credit card histories of stars like Julia Roberts, breaking into AT&T’s computer system and stealing credit card numbers. Legion of Doom MOD’s biggest enemy Legion of Doom was a famous hacker group founded by a hacker called Lex Luthor (real name: Vincent Louis Gelormine). Chaos Computer Club Milw0rm Anonymous