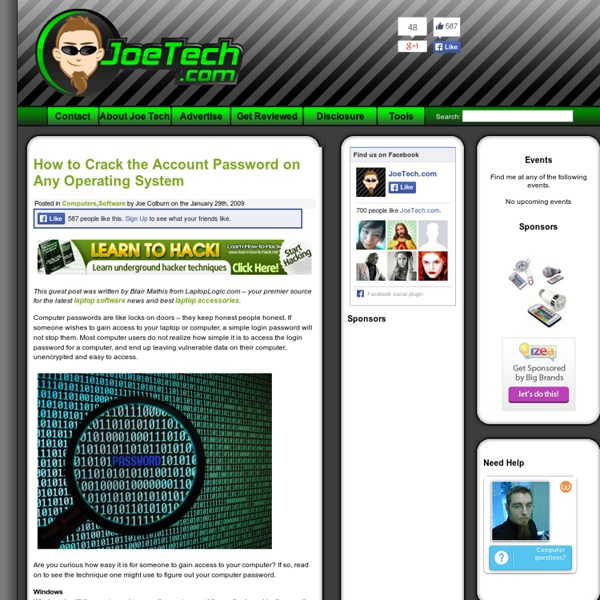 This guest post was written by Blair Mathis from LaptopLogic.com – your premier source for the latest laptop software news and best laptop accessories. Computer passwords are like locks on doors – they keep honest people honest. If someone wishes to gain access to your laptop or computer, a simple login password will not stop them. Most computer users do not realize how simple it is to access the login password for a computer, and end up leaving vulnerable data on their computer, unencrypted and easy to access. Are you curious how easy it is for someone to gain access to your computer? If so, read on to see the technique one might use to figure out your computer password. Windows Windows is still the most popular operating system, and the method used to discover the login password is the easiest. Simply download the Ophcrack ISO and burn it to a CD (or load it onto a USB drive via UNetbootin). The computer will restart and Ophcrack will be loaded. fsck -fy mount -uw / dscl . That’s it.

Google hacking master list This master list of Google Hacking command sets has show up on a forum in Russia, as well as on Scribd. While we often forget about Google hacking, and rarely use it against our own sites, a list like this is going to keep the kids happy as they merrily pound their way through Google to your systems. This makes the data much more accessible than at Johnny I hack stuff. There are some drawbacks in how Johnny I hack stuff works, you have to do a lot of clicking to get to the right hacks.

Hacking Basics This tutorial is for information purposes only, and I do not endorse any of the activities discussed within this guide. I nor anyone hosting this guide can be held responsible for anything you do after reading this. What you do with your day lies on your shoulders. Here with I am creating an Index.. How to defeat most keyloggers on public computers Keyloggers can generally be classified as either software or hardware keyloggers. Software keyloggers are running as a background task on the system while hardware keyloggers are little devices that are most of the time connected between pc and keyboard recording every keystroke to their own memory. The simple keylogger records every keystroke while more advanced ones make screenshots and record mouse movements as well. The idea for this article was born while reading the excellent Technospot article about keyloggers. The most secure way to defeat keyloggers is of course not to use public computers at all, and to keep a good eye on your own systems or the systems you are working on. You sometimes do not have a choice though which leads to the next most secure way to defeat them: Live CDs.

How To Become A Hacker Copyright © 2001 Eric S. Raymond As editor of the Jargon File and author of a few other well-known documents of similar nature, I often get email requests from enthusiastic network newbies asking (in effect) "how can I learn to be a wizardly hacker?". Painful Computer Pranks Computer pranks to freak out your friends and make them crying for mummy I've been posting many articles about computer pranks on this blog (Deadly Virus Prank, The Ultimate Virus, How to Create a Fake and Harmless Virus and Facebook Virus Prank). Today , I will show you 5 great computer pranks that will frustrate your victims very much. These pranks could be very painfully, so please use them at your own risk ;)

How To Become A Hacker Copyright © 2001 Eric S. Raymond As editor of the Jargon File and author of a few other well-known documents of similar nature, I often get email requests from enthusiastic network newbies asking (in effect) "how can I learn to be a wizardly hacker?". Back in 1996 I noticed that there didn't seem to be any other FAQs or web documents that addressed this vital question, so I started this one. A lot of hackers now consider it definitive, and I suppose that means it is. How to hide files in JPEG pictures If you’re looking to hide files on your PC hard drive, you may have read about ways to encrypt folders or change the attributes on a file so that they cannot be accessed by prying eyes. However, a lot of times hiding files or folders in that way requires that you install some sort of software on your computer, which could then be spotted by someone else. I’ve actually written quite a few articles on how you can hide files and folders in Windows XP and Vista before, but here I’m going to show you a new way to hide files that is very counter-intuitive and therefore pretty safe!

How to Crack a Wi-Fi Network. 1.Back Track Today we’re going to run down, step-by-step, how to crack a Wi-Fi network with WEP security turned on. Dozens of tutorials on how to crack WEP are already all over the internet using this method. Seriously—Google it. This ain’t what you’d call “news.” Hacker Tools (Top Ten List of 2016) Nmap, Wireshark, Metasploit Content Written By Henry Dalziel, 2020 WTF Is This Post? I list my favorite Hacking Tools and Hacking Software of 2020 that I used throughout last year and continue to use them. Why?