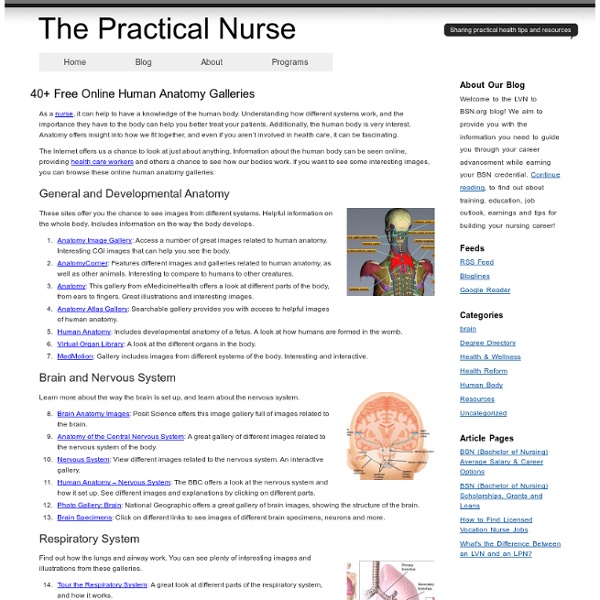 As a nurse, it can help to have a knowledge of the human body. Understanding how different systems work, and the importance they have to the body can help you better treat your patients. Additionally, the human body is very interest. Anatomy offers insight into how we fit together, and even if you aren’t involved in health care, it can be fascinating. The Internet offers us a chance to look at just about anything. General and Developmental Anatomy These sites offer you the chance to see images from different systems. Brain and Nervous System Learn more about the way the brain is set up, and learn about the nervous system. Brain Anatomy Images: Posit Science offers this image gallery full of images related to the brain.Anatomy of the Central Nervous System: A great gallery of different images related to the nervous system of the body.Nervous System: View different images related to the nervous system. Respiratory System Find out how the lungs and airway work. Digestive System ShareThis

It's Okay To Be Smart 15 Free Guides That Really Teach You USEFUL Stuff - StumbleUpon Advertisement Over the past months, we’ve written quite a few PDF manuals for you, on all kinds of diverging subjects, including BitTorrent, iTunes, iPhone, Twitter, Mac, Linux, Photoshop and several other topics. Freely available to MakeUseOf subscribers, there are now multiple manuals released every month, for everyone to enjoy. Enjoy! Do us a favor by sharing those manuals friends! 1 – Internet Guide for the Movie Addict Written by Saikat Basu, this entirely free PDF production will show you anything you’ve ever dreamed about knowing related to movies on the web. Original Post | Download NOW 2 – Internet Guidebook for An Audiophile In forty pages, Will Mueller from tells you all you need to know about free internet listening to music, streaming audio to your computer, and free download music sites to get all your favorite songs and albums in a whim. Original Post | Download NOW 3 – The Incredible Free Manual for Every Mac User Original Post | Download NOW Written by Stefan Neagu.

MDCH - MI Healthier Tomorrow Are you ready to get healthier? To take some of the weight off your shoulders? To make the changes you need to give yourself a healthier tomorrow? If you are ready to gain more energy and drop the pounds, take the MI Healthier Tomorrow pledge. We'll get you going with a free Starter Kit with motivational tips, money-saving offers and other good stuff. And we'll keep you going when you sign up for our e-mails or text messages. Losing just 10% of your body weight can make significant improvements to both your physical and mental health. Improve blood pressure Lower cholesterol levels Improve heart health Decrease risk of Type 2 diabetes Strengthen the immune system Decrease back and joint pain Improve breathing and sleep Increase energy and stamina Improve mood and self-confidence After you take the pledge, don't forget you have the option to share it with friends.

Geek Genius: How To Get The Latest Gadgets Without Breaking The Bank |... - StumbleUpon photo: Harshit Sekhon Tired of spending big bucks every time Apple (AAPL) releases a new version of your go-to gadget? (Hint: this happens every year). Then stop. It’s easy to save on everything, from cell phones to laptops, if you know where to look. Frugal tech-shoppers use iPhone apps and police impound sites to score the best and newest gadgets for cheap. Here are five ways to find discounts on all the gadgets you want: RedLaser Bargain hunters swear by RedLaser, a free application for iPhone and Android phones that scans item bar codes to find the merchant that sells it at the lowest price. ChinaBuye Where can you get a laptop for under $100? NexTag You’ve probably heard of NexTag, a price comparison site that now boasts 30 million users. Games Tester Loan Processing Specialist Sarah Horton knows a thing or two about saving money. Property Room Between drug busts and other police seizures, a whole lot of ownerless, high-ticket items end up in police custody.

New Era In Space Exploration Taking Off: Entrepreneurs Step In Where Big Government Left Off This post is written by Emeline Paat-Dahlstrom, VP of Operations for Singularity University. She spent two decades in the private space sector working on program development and operations for companies and organizations like Space Adventures, Odyssey Moon and the International Space University. She co-authored the book Realizing Tormorrow: The Path to Private Spaceflight. Go SpaceX! Space exploration has always been deemed too expensive and difficult for private enterprise, a realm that only massive government programs could hope to enter. And now with the recent NASA Space Shuttle retirement, and thousands of displaced NASA employees wondering where the future of NASA will be, it is therefore easy for the world to paint a bleak future of space exploration. Last month, SpaceX launched the Dragon on a Falcon 9 rocket, an orbital transport system capable of ferrying astronauts and rendezvousing with the International Space Station. Other groups are focusing on novel propulsion systems.

Downloads « SecManiac.com What we are about… TrustedSec was created on the belief that security is possible and can be done simply. TrustedSec works with large, medium and small organizations to build information security through establishing, maturing, and enhancing security programs in ways that work. Learn More “TrustedSec focuses on identifying and reducing risk within any size of an organization, and we are darn good at it.” David Kennedy – TrustedSec CEO Our Philosophy TrustedSec isn’t just another information security company. Information security can be simple if you have the right partners in place. Our Staff Our team developed The Social-Engineer Toolkit (SET) and Artillery, and is one of the founders of The Penetration Testing Execution Standard (PTES); the only standard for penetration testing. The TrustedSec staff consists of several thought leaders in the information security industry. Education and Awareness Communication and teaching through our assessments is our philosophy at TrustedSec.

A trustworthy guide to black hole astronomy Black holes are some of the most bizarre objects predicted by theoretical physics that actually exist in the cosmos. While many of the more exotic ideas about black holes coming from string theory and other quantum gravity models are far from testable, the existence of astrophysical black holes is uncontroversial. Even if you insist on separating out the observed black holes from the theoretical black hole properties (including everything that lies inside the event horizon, the boundary beyond which nothing can escape), we still have reason to believe they are the same thing. Black holes are real. In Caleb Scharf's forthcoming book, Gravity's Engines, the focus is on the observed and observable properties of astrophysical black holes. The subtitle—How Bubble-Blowing Black Holes Rule Galaxies, Stars, and Life in the Cosmos—may be a trifle grandiose, but the book itself is an excellent overview of the state of black hole research. Listing image by Caleb A.

About Ruby Wondering why Ruby is so popular? Its fans call it a beautiful, artful language. And yet, they say it’s handy and practical. What gives? The Ideals of Ruby’s Creator Ruby is a language of careful balance. He has often said that he is “trying to make Ruby natural, not simple,” in a way that mirrors life. Building on this, he adds: Ruby is simple in appearance, but is very complex inside, just like our human body1. About Ruby’s Growth Since its public release in 1995, Ruby has drawn devoted coders worldwide. Ruby-Talk, the primary mailing list for discussion of the Ruby language, climbed to an average of 200 messages per day in 2006. Ruby is ranked among the top 10 on most of the indices that measure the growth and popularity of programming languages worldwide (such as the TIOBE index). Ruby is also completely free. Seeing Everything as an Object Initially, Matz looked at other languages to find an ideal syntax. In Ruby, everything is an object. Ruby’s Flexibility class Numeric def plus(x) self.