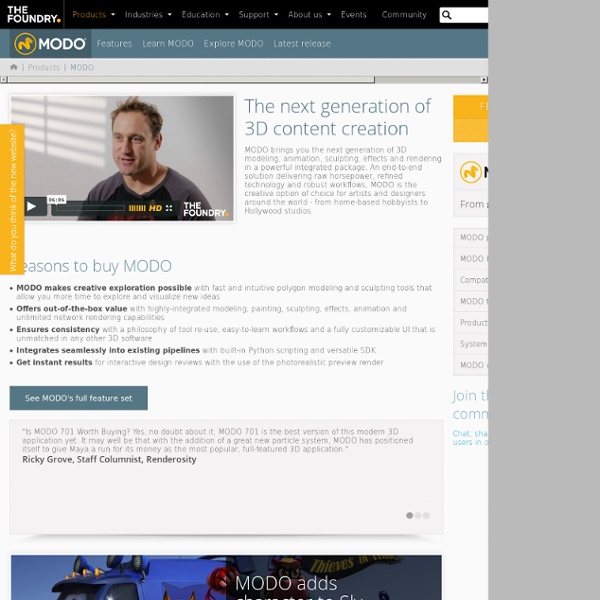 MODO brings you the next generation of 3D modeling, animation, sculpting, effects and rendering in a powerful integrated package. An end-to-end solution delivering raw horsepower, refined technology and robust workflows, MODO is the creative option of choice for artists and designers around the world - from home-based hobbyists to Hollywood studios.

Creative Cloud The Adobe USA site has been optimized for users within the United States. If you live outside the U.S., we recommend that you visit your local site for the most relevant information, including pricing, promotions, and local events. United States Canada - English ZBrush 3.5 vs Mudbox 2010 vs Modo 401 - Need Advice twosheds ( Intersting post, thanks for the info. I got the opposite advice from another forum in which most users said I would need ZBrush or Mudbox, doesn't matter which one in addition to Modo. Their reason for it was because ZB and Mudbox can do much better high detail sculpting for faces and such that Modo can't. Helicon Focus We are happy to introduce our new product that has no analogues on the modern photography accessories market - Helicon FB Tube. Mounted on the camera as a conventional exnetnsion tube, Helicon FB Tube automates focus bracketing in single shot and continuous shooting modes. Adjust settings, hold down the shutter button to shoot a stack and process it in Helicon Focus to achieve a perfectly sharp image. The digital revolution of the last few years made professional photo hardware widely available and affordable. Now it's the advanced technology that makes the difference. Plain single shots are bit by bit giving place to improved and more sophisticated technologies like HDR and EDoF.

VPT 6.0 VPT 8 by HC Gilje, released may 2018. Video Projection Tool (VPT) is a free multipurpose realtime projection software tool for Mac and Windows. VPT 7 was downloaded over 100000 times, so in spite of a lot of other options available VPT still is popular. Among other things it can be used for projecting mapping on complex forms, adapt a projection to a particular space/surface, combine recorded and live footage, for multiscreen HD playback, for interactive installations using arduino sensors or camera tracking ++. VPT is very flexible in terms of control, with presets and a built in cue list, as well as control over almost every single parameter using OSC, midi, serial communication, built in LFOs and ArtNet. It also supports syphon (mac) and spout (windows) for sharing video streams between applications.

kinect As kindly pointed by master Memo, I tested my hardware latency. First photo is the projector latency: displaying the same timecode on both computer screen and the projector, in this case an Optoma EP759. On top the proector timecode, bottom the computer timecode: Result is a 16ms latency. 1 frame at 60FPS. Now testing the Kinect unit. Working with Hardware: DMX, Part 3 In this final article in the DMX set, I’m going to walk through the process of creating the DMX system we used to make the video below. We needed to write a very specific hardware–focused Max patch to get this to work. My hope is that some of the ideas and techniques used to create this system will be useful to you in your explorations of your own DMX hardware based projects. Part 1 – the hardware.

simple-openni - OpenNI library for Processing This project is a simple OpenNI and NITE wrapper for Processing. Therefore not all functions of OpenNI are supported, it's meant more to deliver a simple access to the functionality of this library. For a detailed list of changes see the ChangeLog Version 1.96 Support for Win32/64, OSX32/64, Linux64 Installation is now much simpler --- OpenNI2 --- Version 0.26 Added the autocalibration, now you can only enter the scene and get the skeleton data without the psi pose Updated the examples to enable auto-calibration (User, User3d) Unified the SimpleOpenNI distribution library, from now there is only one library distribution for OSX,Windows and Linux. Had to make this change because of the Processing 2.0 autoinstaller. SimpleOpenNI tries on windows/linux to find automatically the valid architecture(32bit/64bit), depending on java machine you use.

Video Projection Mapping by battleROYAL.berlin battleROYAL created a major production in celebration of the 125th anniversary of MADSACK Mediengruppe. MADSACK invited the city of Hannover to join them in celebrating their anniversary with an open-air festival and spectacular show event. 50,000 visitors gathered in the heart of the city for an evening of live performance, music, and entertainment. Hosted by Barbara Schöneberger, the stage program featured musical performances by Mousse T & Band, Lukas Rieger, Spax, Michael Schulte, Sarah Lombardi, Lions Head, and Sasha. For the grand finale of the night, battleROYAL developed an innovative show experience combining live performance with advanced mapping and video design. The team turned the facade of MADSACK’s Anzeiger Hochhaus into both a vertical stage and multimedia installation, rising 50 metres over the crowd.

12 MUST SEE 3D Projection Mapping Examples It allows buildings to move, transform and even communicate! A new advertising phenomenon is taking the world by storm. 3d Projection Mapping allows marketers and advertisers to create surreal landscapes by projecting images on objects. As you watch these videos, notice how much buzz is created as people record and take photos of the event via their mobile phone. For those of you who are not familiar with the term or marketing technique,