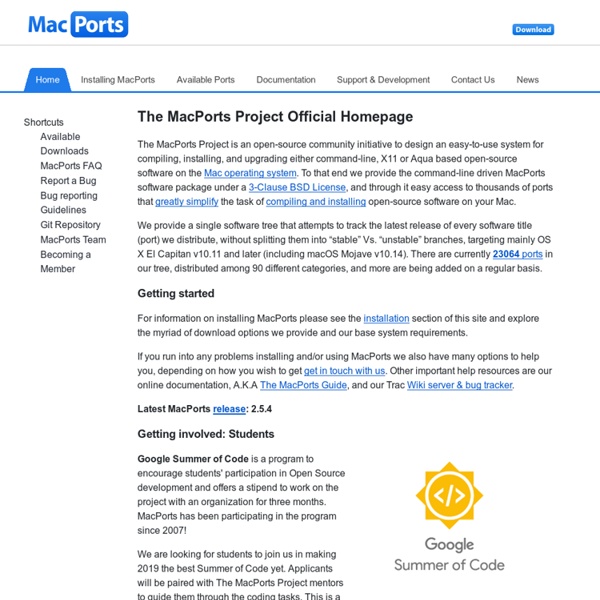 BIRT Home OSCONPortland, ORJuly 20-24 View Full Calendars: BIRT Developer Center Community Calendar | Eclipse Calendar How to Add Custom Visualizations in BIRT iHub 3.1 OpenText recently released BIRT iHub 3.1, the latest version of iHub. Installing Python on Mac OS X The latest version of Mac OS X, El Capitan, comes with Python 2.7 out of the box. You do not need to install or configure anything else to use Python. Having said that, I would strongly recommend that you install the tools and libraries described in the next section before you start building Python applications for real-world use. In particular, you should always install Setuptools, as it makes it much easier for you to use other third-party Python libraries. The version of Python that ships with OS X is great for learning but it’s not good for development. The version shipped with OS X may be out of date from the official current Python release, which is considered the stable production version.

Obsolete Microkernel Dooms Mac OS X to Lag Linux in Performance Disagreements exist about whether or not microkernels are good. It's easy to get the impression they're good because they were proposed as a refinement after monolithic kernels. Microkernels are mostly discredited now, however, because they have performance problems, and the benefits originally promised are a fantasy.

Harvest integration This plugin is used to sync time entries made in Harvest with issues in Redmine by scanning the notes field of incoming Harvest entries for a 2-5 digit number which would correspond to a Redmine issue ID. When an issue is found it adds time to Redmine accordingly (and attempts to carry over the task name from Harvest). There's also a feature to set custom filters based on some combination the project name, task name, or a string occurrence (regex) in the notes. Entries from Harvest are displayed in the Redmine UI using the jQuery DataTables plugin which offers filtering, paging, and some other snazzy UI elements.

Installing / Updating Python on OS X While Python comes pre-installed on OS X, Apple doesn’t do a good job on keeping the Python runtime environment up to date. Currently, on Mac OS X 10.7.4 “Lion”, entering python -V returns Python 2.7.1. Even worse, Mac OS X 10.6 “Snow Leopard” is still on a Python 2.6 release. While the latest Python releases are always available on updating a Mac isn’t a simple, straight forward process. Follow along and update your Mac to Python 2.7.3, or 3.3.0 or whatever the newest 2.x and 3.x release might be, when you read this. 24C3: Inside the Mac OS X Kernel Many buzzwords are associated with Mac OS X: Mach kernel, microkernel, FreeBSD kernel, C++, 64 bit, UNIX... and while all of these apply in some way, "XNU", the Mac OS X kernel is neither Mach, nor FreeBSD-based, it's not a microkernel, it's not written in C++ and it's not 64 bit - but it is UNIX... but just since recently. This talk intends to clear up the confusion by presenting details of the Mac OS X kernel architecture, its components Mach, BSD and I/O-Kit, what's so different and special about this design, and what the special strengths of it are. The talk first illustrates the history behind BSD and Mach, how NEXT combined these technologies in the 1980s, and how Apple extended them in the late 1990 after buying NEXT.

Flexible, Responsive Grid Grid Fundamentals The core structure of the grid is defined by the use row classes to create horizontal rows which also assign the page's max-width, and function to contain the various page columns. Column classes create the final structure of the page. As a responsive, fluid-fixed, framework - our columns don't have a fixed width: they vary based on the resolution of the screen, or the size of the window (try scaling down this window to see what we mean). This allows for your project to adapt to any viewport, any device, without separate stylesheets or html templates.

Category:Free package management systems This is a category of articles relating to software which can be freely used, copied, studied, modified, and redistributed by everyone that obtains a copy: "free software" or "open source software". Typically, this means software which is distributed with a free software license, and whose source code is available to anyone who receives a copy of the software. Subcategories This category has only the following subcategory. Blog E Web Font Tracking Scripts July 5, 2014 One of the trends we've noticed across font distributors, is the requirement to install font tracking scripts in websites. This generated buzz with developers which prompted me to write this short post. I'll just lay it out there: we don’t require ANY tracking scripts of ANY kind. For that matter, we don’t require ANYTHING additional to be installed in your website.

Seems easy. Installed with no issues. Got Django using this by finneycanhelp Nov 24