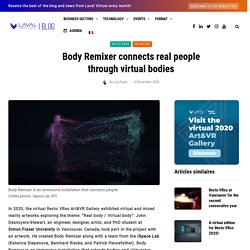 In 2020, the virtual Recto VRso Art&VR Gallery exhibited virtual and mixed reality artworks exploring the theme: “Real body / Virtual body”. John Desnoyers-Stewart, an engineer, designer, artist, and PhD student at Simon Fraser University in Vancouver, Canada, took part in the project with an artwork. He created Body Remixer along with a team from the iSpace Lab (Katerina Stepanova, Bernhard Riecke, and Patrick Pennefather). Body Remixer is an immersive installation that extends bodies and stimulates social connection. We interviewed him, and asked him about his artwork, its link to Recto VRso, and his upcoming projects and how he adapted to 2020.

Holgerlippmann. Holger lippmann » spinners. Unfolding silently based on differently layered perlin noise structures, unfolding silently is an abstract work series that is reminiscent of a northern type of landscape. it also refers to traditional asian landscape painting different automated and/or keyboard input values are used for a layered image build up. 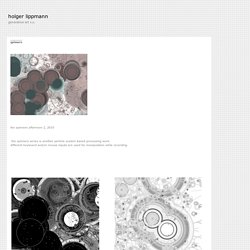 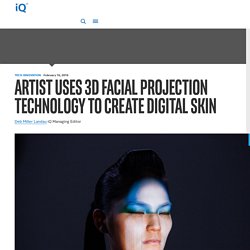 Makeup has the transformative ability to make a face beautiful, alluring, sexy, clownish or creepy. As the art of makeup moves into the digital age, it won’t be long before people can use 3D facial projection technology to paint faces with anything from tiger stripes and leathery snakeskin, to exploding waterfalls and erupting bouquets of flowers. The experimental art of facial projection by Japanese artist and scientist Nobumichi Asai turns the human face into a canvas of the imagination.

The curves and features of the face become an irresistible landscape for animated, kaleidoscopic images. “The most interesting thing about technology is that it makes the impossible, possible,” said Asai. Asai uses the human face much like a filmmaker uses the big screen. Unnamed soundsculpture. Holger lippmann. Japan: Technology Gives Life To Children's Drawings.

Onformative – ANIMA iki. Fluid shimmering patterns flow around a luminescent orb suspended in space as tones oscillate in the room. »ANIMA« is an entity that modifies sound and visuals as it reacts to and forages in its environment. 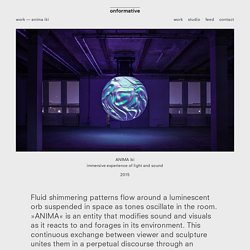 This continuous exchange between viewer and sculpture unites them in a perpetual discourse through an interactive soundscape and visuals. »ANIMA« is a sculptural installation developed to explore the relationship between itself and its surroundings through the use of movement, texture, light and sound. The installation consists of a giant glowing sphere measuring two meters in diameter. This larger-than-life entity is suspended from the ceiling, as if in mid-air, in a darkened room. The luminescent sculpture acts as the sole light source for the space, drawing viewers in as it reacts to their presence. Loop over water in een projection-mapped rijstveld. HARMONY door teamLab. 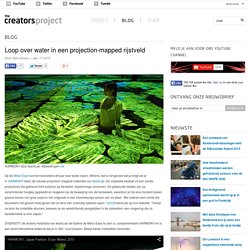 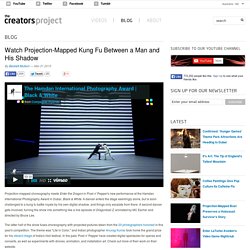 A dancer enters the stage seemingly alone, but is soon challenged to a kung fu battle royale by his own digital shadow, and things only escalate from there. A second dancer gets involved, turning the show into something like a live episode of Dragonball Z, animated by MC Escher and directed by Bruce Lee. The latter half of the show fuses choreography with projected pictures taken from the 20 photographers honored in this year's competition. 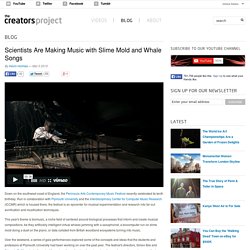 Run in collaboration with Plymouth University and the Interdisciplinary Center for Computer Music Research (ICCMR) which is housed there, the festival is an epicenter for musical experimentation and research into far-out sonification and musification techniques. This year's theme is biomusic, a niche field of centered around biological processes that inform and create musical compositions, be they artificially intelligent virtual whales jamming with a saxophonist, a biocomputer run on slime mold doing a duet on the piano, or data collated from British woodland ecosystems turning into music.

Over the weekend, a series of gala performances explored some of the concepts and ideas that the students and professors at Plymouth University had been working on over the past year. The festival's directors, Simon Ible and Eduardo R. Biocomputer music. Fast Travel Related: Perdez-vous dans un immense labyrinthe cosmique. Images de l'artiste. 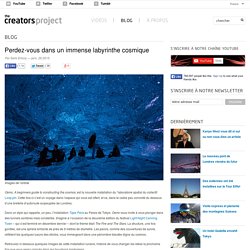 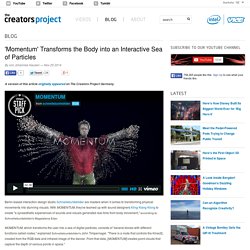 Berlin-based interaction design studio Schnellebuntebilder are masters when it comes to transforming physical movements into stunning visuals. With MOMENTUM, they've teamed up with sound designers Kling Klang Klong to create "a synaesthetic experiences of sounds and visuals generated real-time from body movement," according to Schnellebuntebilder's Magdalena Eder. MOMENTUM, which transforms the user into a sea of digital particles, consists of "several blocks with different functions called nodes," explained Schnellebuntebilder's John Timpernagel. "There is a node that controls the Kinect2, created from the RGB data and infrared image of the dancer. 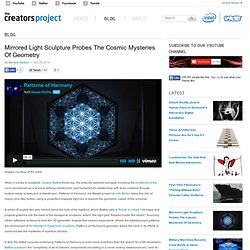 His artworks address concepts including the limitations of the mind (envisioned as a physics-defying robotic bird), and humankind's relationship with tools (realized through custom-made screws and screwdrivers). Patterns of Harmony, his Master-project at UdK Berlin, takes this line of inquiry one step further, using a projection-mapped light box to explore the geometric nature of the universe. A series of angled two-way mirrors forms the bulk of the lightbox, which Battha calls a "fractal of cubes. " He maps and projects graphics into the back of the hexagonal sculpture, where "the light gets 'trapped inside' the object," bouncing off the reflective surfaces to form the 3D geometric shapes that viewers experience. Below, examine moments from Patterns of Harmony: Visit Battha's website to see more of his gorgeous, high concept art.

Immersive Music Painter. Enra " Torque starter " [Video] Jim Campbell's Sculptural LED Light Installations. Even the Lumiére Brothers would glow over the work of artist and light engineer, Jim Campbell. The prolific pioneer of patchwork bulb-wiring's career spans three decades, and his work keeps on getting better—the artist's newest works have been called "consummate" and "transformative" by Art Daily after their debut this month at Bryce Wolkowitz Gallery. It goes without saying that the mastery of his specific genre of low resolution re-imagings, communicated through programmed bulbs and LEDs, is a practice thirty years in the making. Good thing he's got a retrospective show coming up.

Rhythms of Perception, the artist's first major exhibition in a New York museum, brings a survey spanning his career in contemporary art to the Museum of the Moving Image on March 20, from his earliest pieces to his project in Madison Square Park and his new work, showcased in our documentary on the luminary (above!). Naziha MESTAOUI. One Beat One Tree. INSIDE THE BLACK BOX. New media art, live media performance, sound design.

It´s fire, you can touch it. Mine Control - Shadow. Body Movies by Rafael Lozano-Hemmer (2001) Interactive Plant Growing. CONTACT: Augmented Acoustics. Japanese dancers using lights in their performance is hypnotizing. DROMOS - An immersive performance by Maotik and Fraction. THE ARK. Metamorphy 1. Amazing Art Installation Turns You Into A Bird. RYOICHI KUROKAWA. Variable 4. Variable 4 is an outdoor sound installation that translates weather conditions into musical patterns in real time. Using meteorological sensors connected to a custom software environment, the weather itself acts as conductor, navigating through a map of twenty-four specifically-written movements. Every aspect of the piece, from broad harmonic progressions down to individual notes and timbres, is influenced by changes in the environment: wind speed, rainfall, solar radiation, humidity, tropospheric variance, temperature, and more.