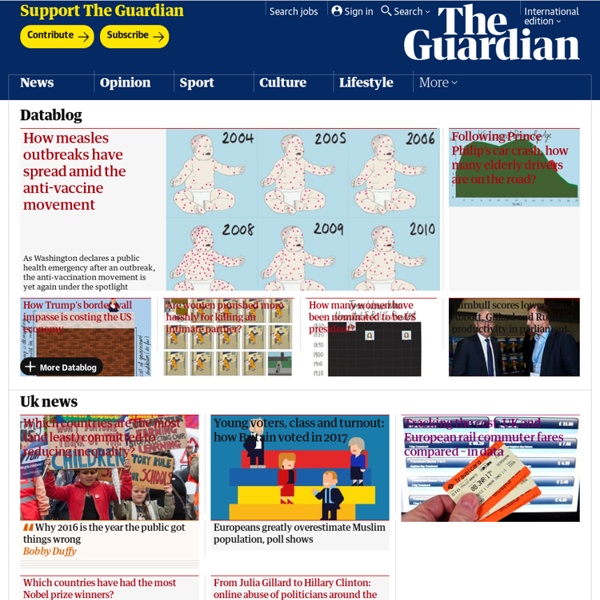 Free Geolocation Database New Database Format Available: This page is for our legacy databases. For our latest database format, please see our GeoLite2 Databases. Databases 10 Awesome Free Tools To Make Infographics Advertisement Who can resist a colourful, thoughtful venn diagram anyway? In terms of blogging success, infographics are far more likely to be shared than your average blog post.

Data visualization books: How to start your personal library The Excel Charts Blog There are many approaches to data visualization. Take well-know authors like Tufte, Cleveland, Ware, Few, Bertin or McCandless. There is some overlap, but they all approach data visualization from a different angle. UK Open Data Institute (Silicon Roundabout) Posted by Information Age on 28 November 2011 Share article 0googleplus Short of time? Print this pageEmail article

Infographics old and new: top data visualisations, in pictures There is an infographic boom going on out there - with the internet flooded with data visualisations of the way we fight war, how we use Twitter, what music we like and how we use the, er, internet. But new as these are, there's a long tradition of telling stories using graphics. Information Graphics from Taschen, which includes work from the Guardian such as our public spending chart, tells the story of how information graphics came to rule our world. We've selected some of those from the past - to contrast with some key infographics from the past few years - albeit missing out hundreds of examples we could have chosen from the years inbetween.

Royal Society journal archive made permanently free to access 26 October 2011 Around 60,000 historical scientific papers are accessible via a fully searchable online archive, with papers published more than 70 years ago now becoming freely available. The Royal Society is the world’s oldest scientific publisher, with the first edition of Philosophical Transactions of the Royal Society appearing in 1665. Henry Oldenburg – Secretary of the Royal Society and first Editor of the publication – ensured that it was “licensed by the council of the society, being first reviewed by some of the members of the same”, thus making it the first ever peer-reviewed journal. GeoVation » Enter the Challenge Entrepreneurs, developers, community groups, innovators – enter the GeoVation Challenge for a chance to win a slice of innovation funding to help you develop your idea. There will be funding for ideas that make best use of Ordnance Survey data, including OS OpenData. How can we encourage active lifestyles in Britain? Enter the Challenge This challenge has now closed.

Live map of London Underground trains Loading... Powered by Leaflet — Map tiles © Thunderforest, data © OpenStreetMap contributors. Live London Underground map By Matthew Somerville. Data collected: Mon, 05 Sep 2016 08:33:02 +0100 Roman Architecture About the Course This course is an introduction to the great buildings and engineering marvels of Rome and its empire, with an emphasis on urban planning and individual monuments and their decoration, including mural painting. While architectural developments in Rome, Pompeii, and Central Italy are highlighted, the course also provides a survey of sites and structures in what are now North Italy, Sicily, France, Spain, Germany, Greece, Turkey, Croatia, Jordan, Lebanon, Libya, and North Africa.

OS mapping data: a new landscape unfolds The Free Our Data campaign has scored a major victory, with the announcement by the government that it intends to make Ordnance Survey maps free for use online by any organisation – including commercial ones – at resolutions more detailed than commercial 1:25,000 Landranger maps from April next year. The announcement of the opening of a consultation on the plan by Gordon Brown at Downing Street on Tuesday, as part of a seminar on making public data public – set in the wider context of public service reform, under the "Smarter Government" umbrella – indicates that the ideas underpinning the campaign have now been taken on board at the highest levels of government. "Mid-range" maps, with resolutions from 1:10,000 upwards, will be made available for re-use, under the plans announced by the prime minister, along with information on postcode areas and electoral and council boundaries. The issue appears to have gone to the top of government to be resolved.

Cool Infographics - Cool Posters A collection of great infographic posters from around the world. Click the image to be taken to the poster site to view details and order yourself a copy. Purchasing posters through these links will help support Cool Infographics on most of the posters below. Thank you! Weave Data Tutorial Weave Data TutorialTutorial for Weave Magazine 03.10 about visualizing network data Client: Weave Magazine / Page publisher We all use twitter, write emails, skype and blog all day long. There isn’t a single day we are not going to visit websites like google, youtube, the website of our favorite newspaper or social network and browse through the web. Despite that, or actually because of it, everybody tends to use the web in a different manner.