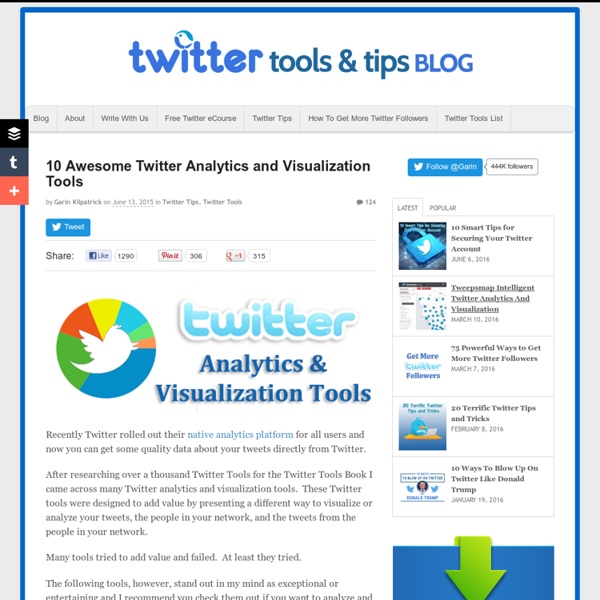 Recently Twitter rolled out their native analytics platform for all users and now you can get some quality data about your tweets directly from Twitter. After researching over a thousand Twitter Tools for the Twitter Tools Book I came across many Twitter analytics and visualization tools. These Twitter tools were designed to add value by presenting a different way to visualize or analyze your tweets, the people in your network, and the tweets from the people in your network. Many tools tried to add value and failed. At least they tried. The following tools, however, stand out in my mind as exceptional or entertaining and I recommend you check them out if you want to analyze and visualize your activity on Twitter. 1. TweepsMap is an excellent Twitter tool for both analyzing and visualizing your Twitter network. As it’s name suggests it does this by showing you how your followers are distributed on a map, in terms of percentages. You can see the distribution of my followers below. Unique. 2.

The Hollywood In$ider Explore data on over 1200 major Hollywood films of the last ten years. Click on the axis labels to view other data. View each year by itself. Ever wonder what happens on the Internet every minute? Do you know what goes on the Internet every single minute? Google processes 2 million search requests. 72 hours of videos are uploaded on YouTube. And over 204 million emails are sent. This happens every minute. 10 Steps To Designing An Amazing Infographic Information can be useful—and even beautiful—but only when it’s presented well. In an age of information overload, any guidance through the clutter comes as a welcome relief. That’s one reason for the recent popularity of information graphics. Infographics are visual designs that help to explain complicated data in a simple way (mental-health emergencies at Burning Man, anyone?).

30 Tweet Ideas: Part 2 of the Twitter Series for Property Managers Posted on 22. Dec, 2011 by Charity Hisle in Marketing Twitter is one of the most difficult social networks to explain and to learn for property management professionals. Often I hear questions like, “What do we say?” or “Who are we talking to?” Understanding Twitter Analytics: What You Need to Know! One of the key components for marketers to look at while deciding on the performance of any of their social networks is measurement. While Facebook always had Facebook Insights to give out the details of your owned presence details along with the post level activity, we always had to rely on third party estimated data for Twitter. Now with Twitter going public and aiming to generate more money via advertising, they have certainly stepped up their game with the introduction of Twitter Analytics for different components on Twitter. Logging in to the Twitter Ads or Twitter Analytics platform, the default dashboard is presented to the account with three components to look at: Recommended for YouWebcast: The Art of Growth Hacking: Gaining Early Traction by Doing Things that Don't Scale Impressions are IN:

22 Useful Online Chart & Graph Generators Have you ever encounter situations where you need to create a simple yet good-looking chart, graphs or diagrams and all you have is your browser? Charts are good and effective way to show relationship between entities but sometimes creating one can be pretty challenging especially when your favorite word processing software is not around. In today’s post, we want to highlight some of the best web services that allow you to create various charts and graphs online on-the-fly. Most of them are easy to use and don’t you even worry about the design. Your output will be as good as what you see in the screen shots below. Full list after jump.

Ideas for Using Pinterest for Property Management Kicking Flickr to the curb and jumping on the Pinterest bandwagon is all the rage right now! But why? How can we use Pinterest to market our businesses and properties online? Let’s start with the basics of Pinterest Twitter Search, Monitoring, & Analytics With iOS 9, Search lets you look for content from the web, your contacts, apps, nearby places, and more. Powered by Siri, Search offers suggestions and updates results as you type. There are two ways to use Search on your iOS device. Quick Search Drag down from the middle of the Home screen and type what you're looking for. OWL - Semantic Web Standards Overview The W3C Web Ontology Language (OWL) is a Semantic Web language designed to represent rich and complex knowledge about things, groups of things, and relations between things. OWL is a computational logic-based language such that knowledge expressed in OWL can be exploited by computer programs, e.g., to verify the consistency of that knowledge or to make implicit knowledge explicit. OWL documents, known as ontologies, can be published in the World Wide Web and may refer to or be referred from other OWL ontologies. OWL is part of the W3C’s Semantic Web technology stack, which includes RDF, RDFS, SPARQL, etc.

This Is the Most Detailed Picture of the Internet Ever (and Making it Was Very Illegal) Why would you need a map of the Internet? The Internet is not like the Grand Canyon. It is not a destination in a voyage that requires so many right turns and so many left turns. The Internet, as the name suggests and many of you already know, is nothing but the sum of decentralized connections between various interconnected computers that are speaking roughly the same language. To map out those connections and visualize the place where I spend so much of my time may not have any clear use, but it intrigues the pants off me. An anonymous researcher with a lot of time on his hands apparently shares the sentiment.

Interactive Graphics Mapping the world’s worst Ebola epidemic More than 2,600 people in West Africa have been killed by the virus, for which there is no known cure. The world’s worst recorded epidemic […] View the interactive example → History of Ebola outbreaks Twitter: How to archive event hashtags and create an interactive visualization of the conversation MASHe The use of Twitter to collecting tweets around an event hashtag allowing participants to share and contribute continues to grow and has even become part of mass media events, various TV shows now having and publicising their own tag. This resource is often lost in time, only tiny snippets being captured in blog posts or summaries using tools like Storify, which often loose the richness of individual conversations between participants. It doesn’t have to be this way. Using a combination of Google Spreadsheets as a data source and a simple web interface to add interactivity it’s possible to let users explorer your entire event hashtag and replay any of conversations. View example conversation replay