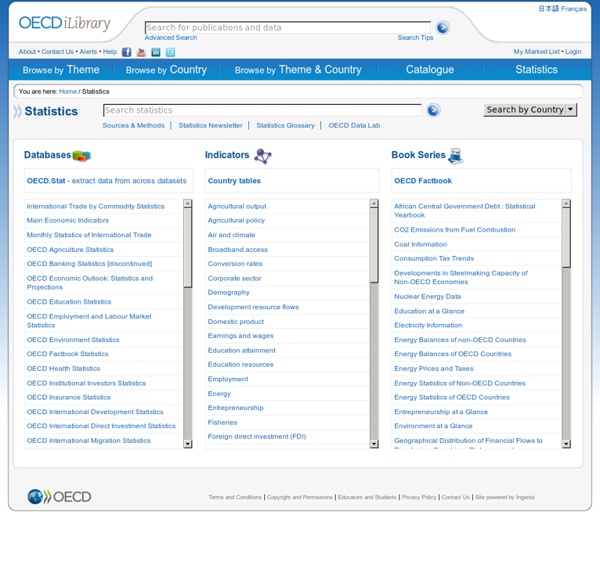 How British do you feel? Visualised Visualising data online and in a newspaper is like the difference between speaking Spanish and conversing in French; there have the same roots and are ostensibly similar - but in practice are completely different. So it's proven with the results of our online Britishness survey, where we asked readers to rate how they felt about their nationality. The results provide a fascinating insight into how different parts of the UK really feel about the nation as a whole. Demographic and Social Statistics Social indicators covering a wide range of subject-matter fields are compiled by the Statistics Division, Department of Economic and Social Affairs of the United Nations Secretariat, from many national and international sources. The indicators presented here consist mainly of the minimum list which has been proposed for follow-up and monitoring implementation of major United Nations conferences on children, population and development, social development and women. This minimum list is contained in the Report of the Expert Group on the Statistical Implications of Recent Major United Nations Conferences (E/CN.3/AC.1/1996/R.4). Technical background on the development of social indicators is contained in two United Nations publications, Handbook on Social Indicators (United Nations publication, Series F, No. 49, 1989) and Towards a System of Social and Demographic Statistics (United Nations publication, Series F, No. 18, 1975)

Hidden iframe injection attacks [Updated on October 27, 2009 with new a version of the script] It is a shame that after all those posts about security, some of my websites were under attack today. Shoban and Anand emailed me about this today morning (Thanks guys) and I tried to understand what was going on. To my utter disbelief more than 10 websites hosted in the same server were affected by the attack. All the index.* files in the server were infected with a piece of code that loaded a hidden iframe in the page. gromgull Local OpenID no help available BibSonomy usertagusergroupauthorconceptBibTeX keysearch:allsearch:gromgull :: gromgull :: About OverviewThey Rule aims to provide a glimpse of some of the relationships of the US ruling class. It takes as its focus the boards of some of the most powerful U.S. companies, which share many of the same directors. Some individuals sit on 5, 6 or 7 of the top 1000 companies. It allows users to browse through these interlocking directories and run searches on the boards and companies. A user can save a map of connections complete with their annotations and email links to these maps to others. They Rule is a starting point for research about these powerful individuals and corporations.

SPARQL Query Language for RDF W3C Recommendation 15 January 2008 New Version Available: SPARQL 1.1 (Document Status Update, 26 March 2013) The SPARQL Working Group has produced a W3C Recommendation for a new version of SPARQL which adds features to this 2008 version. Please see SPARQL 1.1 Overview for an introduction to SPARQL 1.1 and a guide to the SPARQL 1.1 document set. This version: Latest version:

Population Research Institute PRI sends research teams around the globe, to gather hard data on abuses committed against women and families. This research has been used before Congress and has been, in many cases, instrumental in the passage of pro-life laws and amendments.

Zenmap - Official cross-platform Nmap Security Scanner GUI Zenmap is the official Nmap Security Scanner GUI. It is a multi-platform (Linux, Windows, Mac OS X, BSD, etc.) free and open source application which aims to make Nmap easy for beginners to use while providing advanced features for experienced Nmap users. Frequently used scans can be saved as profiles to make them easy to run repeatedly. A command creator allows interactive creation of Nmap command lines. Scan results can be saved and viewed later. Saved scan results can be compared with one another to see how they differ. Free Geolocation Database New Database Format Available: This page is for our legacy databases. For our latest database format, please see our GeoLite2 Databases. Databases