Your Cheat Sheet for "The Big Short" - Third Way. Introduction The big financial meltdown is finally getting its star turn on the big screen with the release of The Big Short. 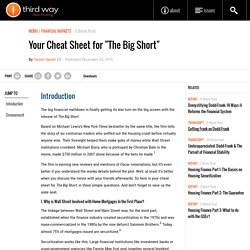 Based on Michael Lewis’s New York Times bestseller by the same title, the film tells the story of six contrarian traders who sniffed out the housing crash before virtually anyone else. Their foresight helped them make gobs of money while Wall Street institutions crumbled. Michael Burry, who is portrayed by Christian Bale in the movie, made $750 million in 2007 alone because of the bets he made.1. Gorton. Subprime mortgage crisis - Wikipedia. The U.S. subprime mortgage crisis was a set of events and conditions that were significant aspects of a financial crisis and subsequent recession that became manifestly visible in 2008. 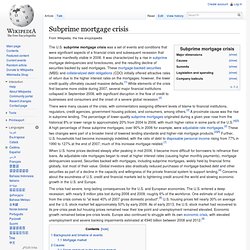 It was characterized by a rise in subprime mortgage delinquencies and foreclosures, and the resulting decline of securities backed by said mortgages. These mortgage-backed securities (MBS) and collateralized debt obligations (CDO) initially offered attractive rates of return due to the higher interest rates on the mortgages; however, the lower credit quality ultimately caused massive defaults.[1] While elements of the crisis first became more visible during 2007, several major financial institutions collapsed in September 2008, with significant disruption in the flow of credit to businesses and consumers and the onset of a severe global recession.[2] When U.S. home prices declined steeply after peaking in mid-2006, it became more difficult for borrowers to refinance their loans. 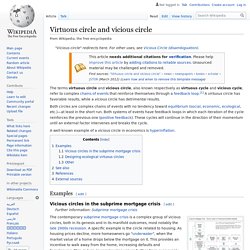 Both circles are complexes of events with no tendency towards equilibrium (at least in the short run). Subprime mortgage crisis - Wikipedia. The Shadow Banking System. Photo courtesy of FinancialAidPodcast (via flickr) A major player in the CMO market was the so-called “Shadow Banking System,” a collection of financial institutions including investment banks, hedge funds, money-market funds, and finance companies, as well as newly invented entities called “asset-backed conduits” (ABCs) and “structured investment vehicles” (SIVs). 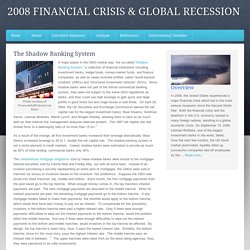 Since shadow banks were not part of the formal commercial banking system, they were not subject to the same strict regulations as banks, and thus could use high leverage to gain quick and large profits in good times but also huge losses in bad times. On April 28, 2004, the US Securities and Exchange Commission waived the net capital rule for the largest investment banks: Bear Stearns, Goldman Sachs, Lehman Brothers, Merrill Lynch, and Morgan Stanley, allowing them to take on as much debt as their internal risk management analyses deemed prudent. . [ next section: The Collapse ] Footnotes: The 2007-08 Financial Crisis In Review. When the Wall Street evangelists started preaching "no bailout for you" before the collapse of British bank Northern Rock, they hardly knew that history would ultimately have the last laugh. 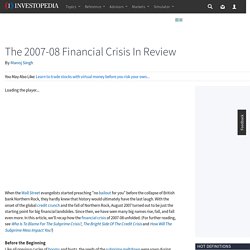 With the onset of the global credit crunch and the fall of Northern Rock, August 2007 turned out to be just the starting point for big financial landslides. Since then, we have seen many big names rise, fall, and fall even more. Financial Crisis 2007/2008 Overview. Recommended Reading List The financial crisis of 2007/2008 was the largest and most severe financial event since the Great Depression and reshaped the world of finance and investment banking. 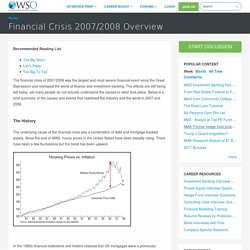 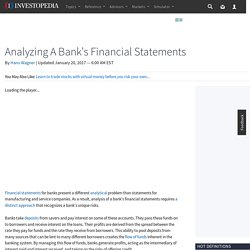 As a result, analysis of a bank's financial statements requires a distinct approach that recognizes a bank's unique risks. Banks take deposits from savers and pay interest on some of these accounts. They pass these funds on to borrowers and receive interest on the loans. WATERTOWN SAVINGS BANK Review - Credit Union Reviews. 111 CLINTON STREETWATERTOWN, New York 13601 Predictive Indicator neutral As of March 31, 2016 Federal Reserve System Identifier 298218 (Based on data from the previous quarter.) 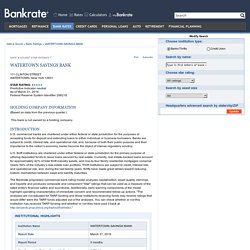