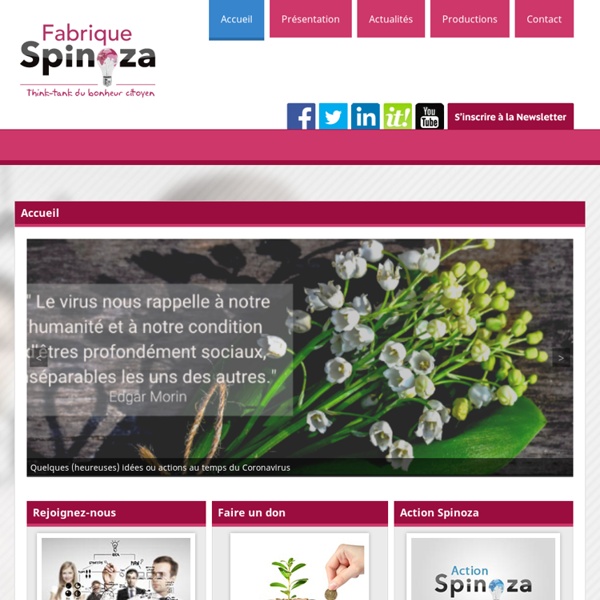 6 Thinking Hats - Bono de, Edward The Six Thinking Hats technique (6TH) of Edward de Bono is a model that can be used for exploring different perspectives towards a complex situation or challenge. Seeing things in various ways is often a good idea in strategy formation or complex decision-making processes. The 6TH technique is designed to help individuals deliberately adopt a variety of perspectives on a subject that may be very different from the one that they might most naturally assume. In wearing a particular thinking hat, people play roles, or "as if" themselves into a particular perspective. For instance, one could play the devil’s advocate, even if only for the sake of generating discussion. Eurozone unemployment hits new record 31 January 2012Last updated at 11:44 Unemployment is at the highest rate since the euro was launched in 1999 Unemployment in the eurozone hit a record high at the end of last year, the Eurostat agency has said.

Employee Engagement & Company Culture Blog Officevibe Blog The Best Employee Engagement And Company Culture Content The 10 Employee Engagement Metrics That Matter The de Bono Group - Six Thinking Hats Used with well-defined and explicit Return On Investment success in corporations worldwide, Six Thinking Hats is a simple, effective parallel thinking process that helps people be more productive, focused, and mindfully involved. A powerful tool set, which once learned can be applied immediately! You and your team members can learn how to separate thinking into six clear functions and roles. "The Euro’s Imagined Community" by Robert J Shiller Exit from comment view mode. Click to hide this space NEW HAVEN – Great significance – probably too much – has been attached to a possible breakup of the eurozone. Many believe that such a breakup – if, say, Greece abandoned the euro and reintroduced the drachma – would constitute a political failure that would ultimately threaten Europe’s stability. Speaking before the Bundestag last October, German Chancellor Angela Merkel put the matter starkly:

Six Thinking Hats Six Thinking Hats is a book by Edward de Bono which describes a tool for group discussion and individual thinking involving six colored hats. "Six Thinking Hats" and the associated idea parallel thinking provide a means for groups to plan thinking processes in a detailed and cohesive way, and in doing so to think together more effectively.[2] Underlying principles[edit] The premise of the method is that the human brain thinks in a number of distinct ways which can be deliberately challenged, and hence planned for use in a structured way allowing one to develop tactics for thinking about particular issues. de Bono identifies six distinct directions in which the brain can be challenged. In each of these directions the brain will identify and bring into conscious thought certain aspects of issues being considered (e.g. gut instinct, pessimistic judgement, neutral facts).

European Identities Part II This is a continuation of the extract of the talk I gave at the University of Geneva in Nov. 2011 on “European Identities.” This part deals with the failure to create an identity at a European level: Let me turn to nation building at the EU level. European Identities Part I I’m reproducing the transcript of parts of a talk I gave in Geneva last November at the Latsis Foundation Prize Ceremony on “European Identities.” This excerpt deals with how different European countries have dealt with Muslim immigrant assimilation, and the second excerpt will discuss the lack of identity at a European level. Let me then move on to the question of European identity and why this has posed a particular problem for Europeans of this generation.