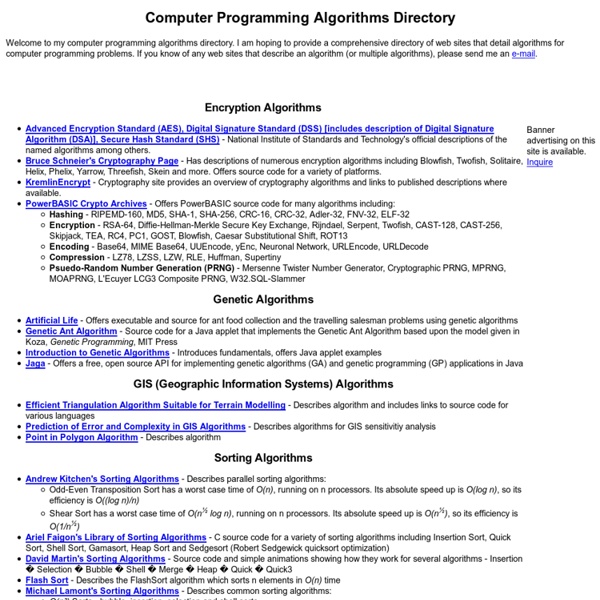 The Evolution of a Programmer High School/Jr.High First year in College program Hello(input, output) begin writeln('Hello World') end. Laird Breyer&#039;s java applets Metropolis-Hastings algorithms are a class of Markov chains which are commonly used to perform large scale calculations and simulations in Physics and Statistics. The button below opens a separate window from your browser containing a demonstation of some of the most common chains which are used for this purpose. The window is resizable, and you may need to adjust its dimensions depending on your system configuration. Two common problems which are approached via M-H algorithms are simulation and numerical integration.

Mahmoud Essam presents: repl.it - Python Help What is repl.it? It is an online environment for interactively exploring programming languages. The name comes from the read-eval-print loop, the interactive toplevel used by languages like Lisp and Python. How do I start? YouTube Playlists for Learning Programming YouTube has been very good platform for learning any thing. Earlier you have seen 400+ courses on YouTube and 130+ NPTEL courses. There are few more courses especially about computer programming. These are contributed by various individuals.

Drawspace.com - Lessons Drawspace Pro Lessons are designed for artists of all levels and educators, and are logically organized into resources and activities. Eventually, all lessons and E-books authored by Brenda Hoddinott will be available here: four to eight brand new lessons and newly-revised older lessons are being added every month! Upgrade Now: Download all 310 lessons and 4 e-books! Try for Free: Download lessons marked as "Free"! 1.1.R1 Glossary Of Art Terms A new career at 55 1. Why did you want to learn to code? Thirty years ago I was making $15 an hour as an analog draftsman and technical illustrator. Before I was laid off this past November, I was fighting to get $15 an hour for administrative jobs. Forest fire Forest fire You are encouraged to solve this task according to the task description, using any language you may know. Implement the Drossel and Schwabl definition of the forest-fire model. It is basically a 2D cellular automaton where each cell can be in three distinct states (empty, tree and burning) and evolves according to the following rules (as given by Wikipedia) A burning cell turns into an empty cell A tree will burn if at least one neighbor is burning A tree ignites with probability f even if no neighbor is burning An empty space fills with a tree with probability p Neighborhood is the Moore neighborhood; boundary conditions are so that on the boundary the cells are always empty ("fixed" boundary condition).

Mahmoud Essam presents: Become a Programmer, Motherfucker If you don't know how to code, then you can learn even if you think you can't. Thousands of people have learned programming from these fine books: Learn Python The Hard Way A Quick, Painless Tutorial on the Python Language Norman Matloff University of California, Davis June 17, 2008 ©2003-2008, N. Matloff Contents 64 Things Every Geek Should Know - laptoplogic.com The term ‘geek’, once used to label a circus freak, has morphed in meaning over the years. What was once an unusual profession transferred into a word indicating social awkwardness. As time has gone on, the word has yet again morphed to indicate a new type of individual: someone who is obsessive over one (or more) particular subjects, whether it be science, photography, electronics, computers, media, or any other field. A geek is one who isn’t satisfied knowing only the surface facts, but instead has a visceral desire to learn everything possible about a particular subject.

Think Labyrinth: Maze Algorithms Maze Classification Mazes in general (and hence algorithms to create Mazes) can be organized along seven different classifications. These are: Dimension, Hyperdimension, Topology, Tessellation, Routing, Texture, and Focus. A Maze can take one item from each of the classes in any combination. Dimension: The dimension class is basically how many dimensions in space the Maze covers. Mahmoud Essam presents: Beginning Game Development: Part VIII - DirectSound Welcome to the eighth article on beginning game development. We have spent a lot of time working with the graphics capabilities of DirectX. We also covered how the DirectX API allows us to control input devices.